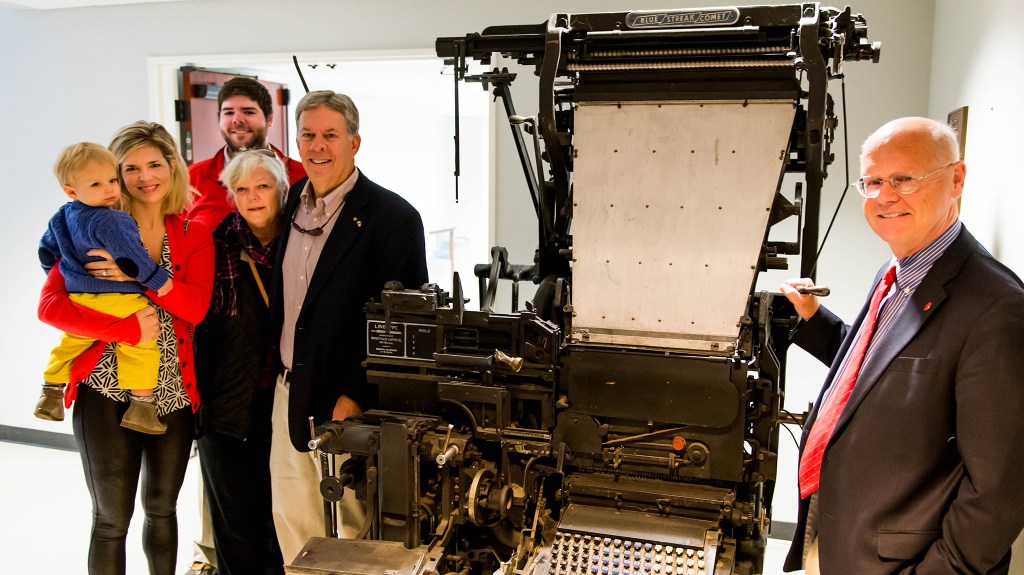 Will Norton, right, dean of the University of Mississippi’s Meek School of Journalism and New Media, stands next to a vintage linotype machine donated to the school by Ashley Brown “Brownie” Futrell Jr., his wife, Susan B. Futrell; son, Ace Futrell; daughter, Nan Futrell Liles; and grandson, Emmett Liles.

Among the keys, dials, cogs and levers of a historic linotype machine are, for one University of Mississippi graduate, memories of his own past.

“It really has sentimental value to me because when I was little, it was in our lobby and I would see it when I went there to visit my grandfather,” said Ace Futrell of Washington, North Carolina, who earned a bachelor’s degree in journalism from the UM Meek School of Journalism and New Media in 2010.

“He would tell me it was my job to keep it clean. It means a whole lot.”

Futrell’s family published the Washington Daily News, winner of the 1990 Pulitzer Prize for Public Service. His father, Ashley Brown “Brownie” Futrell Jr., sold the newspaper in 2010 but kept the linotype machine, valued at about $5,000.

Brownie recently surprised Ace by donating the machine in his honor to the school.

“We retained ownership of the linotype machine because we wanted it placed somewhere significant,” Brownie Futrell said in a brief dedication ceremony attended by UM journalism Dean Will Norton, Assistant Dean Charlie Mitchell, members of the Futrell family, and journalism faculty and staff.

“It’s such an honor for us to have found a home for this cherished piece of our family history at an institution that wants to pay tribute to our profession.”

The Mergenthaler linotype machine, circa 1952, stands at the foot of the basement stairs in Farley Hall, just a few steps away from the room in which The Daily Mississippian newspaper was printed for decades.

The linotype revolutionized and expedited the printing process by enabling publishers to create complete lines of metal type for their presses, rather than assembling the type character by character.

Brownie Futrell said when he approached the journalism school about the donation, Norton and Mitchell began proposing locations for the machine practically before he could finish making the offer.

“It’s something I’ve always wanted to have in the building, so we are just really excited about it,” Norton said. “It honors the Futrell family, but moreover, it’s a tactile reminder of the industry in which so many of our graduates have excelled. We are very proud to have this piece of history.”