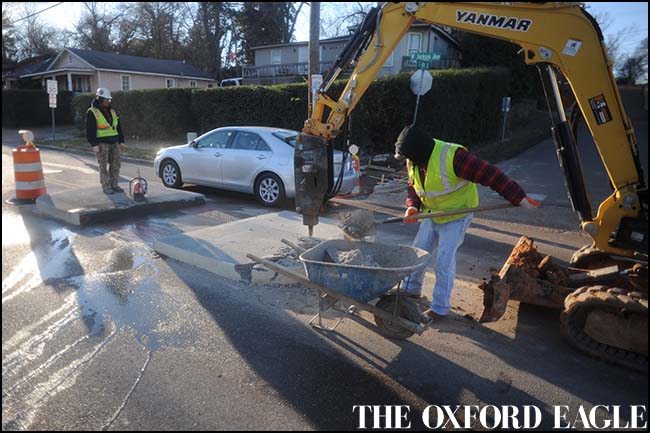 Bruce Newman Workers remove a recently installed concrete crosswalk from Jackson Avenue near its intersection with South 6th Street in Oxford on Tuesday. The crosswalk was put up to help pedestrians during hotel construction, but the city said it wasn’t working out.

An unfamiliar cement structure appeared this weekend on East Jackson Avenue in front of the future of Jackson Row development that made some drivers tilt their head in confusion as to what it was, and made others just plain old annoyed.

The median was intended to be a pedestrian safety refuge for people to be able to walk across the street between Jackson Row and the hotels and convenience store across the street, but it appears it was too wide, causing vehicles to almost drive on the sidewalks and narrowly miss utility poles that are close to the road.

“It will be reconstructed,” Robinson said, but did not say what the new structure will look like.

Chris Johnson, spokesman for CA Ventures, said this morning that on Monday the city’s code enforcement officer told the engineer on site that the “profile” of the structure wasn’t working as intended.

“The engineer is working with the city and they started tearing it out this morning,” Johnson said. “He will be redesigning it and the code enforcement officer will inspect it and it should be reconstructed by this weekend.”

The pedestrian refuge was part of a deal made earlier this year with city planners. CA Ventures wanted to close the sidewalk in front of the construction site to pedestrian traffic to allow for trucks to move onto the property to make deliveries, as to not block traffic on Jackson Avenue. The developer agreed to build the 6-foot-wide crosswalk with the refuge in the middle. It hasn’t been determined if the refuge will remain after the development is constructed.

Jackson Row will be a mixed-use development with commercial and retail space on the bottom level and residential space on the second and third floors. Construction is expected to take 12 to 18 months to complete.