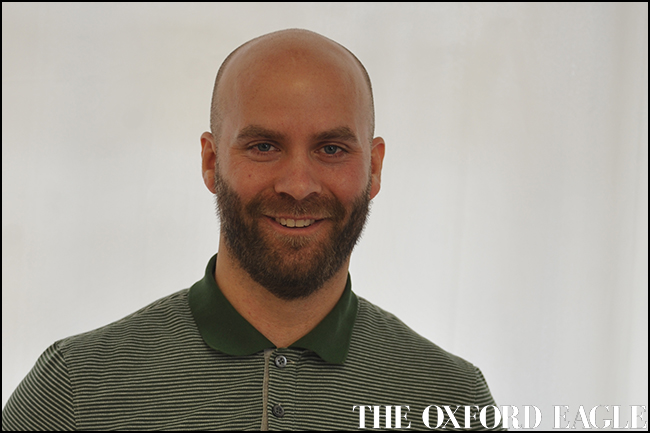 Bruce Newman Chad Oyler leads the way at Bickert’s Orthotics and Prosthetics on South Lamar Avenue near the hospital. He also has built legs for people in Samoa on mission trips.

A business in town is making people’s hopes and dreams come true both in North Mississippi and across the ocean.

Chad Oyler, 36, opened Bickert’s Orthotics and Prosthetics in September 2014 and is gradually gaining more clients and presence in the community.

“We started from scratch,” he said. “So when I came here it was nothing and every day we’re getting bigger and growing. We want to be an ever-present here.”

His business partner, Phil Bickert, also has an office in Corinth and had been encouraging the Chicago native to come to Oxford for years.

“I packed up, opened this office and have been loving it since,” Oyler said.

Oyler and his office assistant have assisted hundreds of patients — on average about three to five a day — and they come from throughout the region and as far away as Charleston.

“That’s the fun thing about my job — no two things are the same,” he said. “You get in there and evaluate and say let’s try this, let’s try that and brainstorm. Especially with bracing.”

The variety comes not only from the individuals, but also their needs. Oyler said the main focus is people want quality of life, whether their hobby is mowing the lawn, skiing, fishing, hunting or more.

“You get to come up with fun things to help them adapt to the world around them,” he said.

Oyler said part of helping individuals is immersing himself in the community. He and his wife have four children, and he enjoys sports, including coaching soccer.

“I really enjoy the full range of patients from the elderly all the way down to children and the athletes in between,” he said. “We really want to fit into the community and be a part of it and know the people next door to help them with their needs as best we can.”

Oyler also said he and his business partner are young and are staying on top of current trends and new ways of helping patients.

“We want to set ourselves apart,” he said. “We are always on the cutting edge of technology. We’re a locally owned and operated-type place and we want to be a part of the community, taking care of them and being available when they need it.”

His client from Charleston is one of the most rewarding for him because it is brainstorming and using new techniques that have brought the man’s life back.

He sees people go from being devastated to having hope daily.

“Lots of times when people are confronted with the thought of losing a limb it can be pretty traumatic in their lives and once they see that they can go on, it’s pretty exciting to see that change in people’s lives — that realization that they can succeed at whatever it is they were doing before,” he said.

Part of his service is helping those individuals who do not have resources to help themselves, and he’s done it on two humanitarian trips to Samoa, funded by a university in Utah, and one fundraising trip to Africa.

In Samoa, Oyler fitted individuals with limbs all day, every day for two weeks on the first trip and for one week on the second.

“We would go through the whole process,” he said. “There’s several steps that go into making a leg. They don’t have the supplies or the means to make them there so we took our tools and went and made do with what we could. We stayed for two weeks and saw tons of patients every day.”

The trip to Africa was in conjunction with a fundraiser for the Lance Armstrong Foundation. A former client of his he fitted with a leg worked for the foundation that was climbing Mount Kilimanjaro for charity.  Fifteen cancer survivors hiked the mountain and his client was the only one with a prosthetic, so he went along to ensure her safety.

“It was a trip of a lifetime — both of them were, actually,” he said.