Saiz cleared, could return against Florida 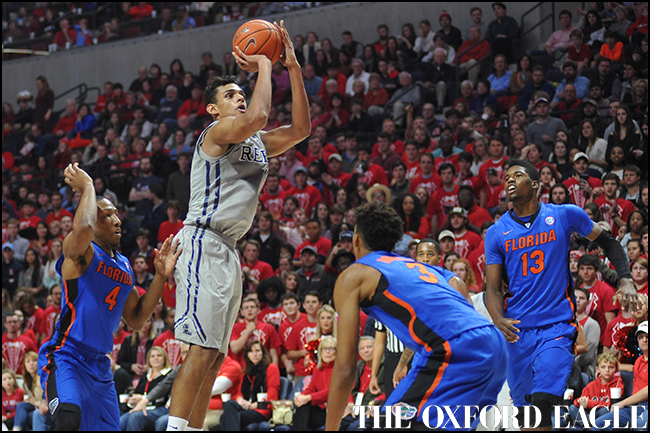 Ole Miss’ Sebastian Saiz (11) will be a game-time decision for tonight’s game at Florida.

Ole Miss’ men’s basketball team will soon have its final starter back.

Sebastian Saiz has been cleared by medical personnel and returned to practice Monday, though head coach Andy Kennedy said whether the Rebels’ leading rebounder and second-leading scorer will play tonight at Florida (8 p.m., ESPNU) will be a game-time decision.

Saiz has missed the last six games after having surgery following the Rebels’ first matchup with the Gators on Jan. 16 to repair a partially detached retina. Ole Miss (15-8, 5-5 Southeastern Conference) has split those games with its second top-60 RPI win coming against Vanderbilt over the weekend.

Should Saiz get the start tonight, it would be the first time since the LSU game on Jan. 13 the Rebels have their regular starting lineup intact. Stefan Moody’s strained hamstring caused him to miss one game while Martavious Newby (eye) missed two games before both returned against Auburn on Jan. 27.

“He hasn’t done much obviously based on the injury and us following the doctors’ protocol, so we’ll see how he responds in the next 48 hours and make a game-time decision,” Kennedy said on the SEC coaches’ teleconference Monday morning.

Kennedy said in the weeks following Saiz’s operation the junior forward would simply need time to recover. Saiz, who’s averaging 12.8 points and 9.8 rebounds per game, watched the Rebels’ game against Auburn on Jan. 27 from the bench with a patch over his right eye but wasn’t wearing the patch while taking in Saturday’s game against Vanderbilt.

Sophomore Marcanvis Hymon has done an adequate job filling in for the 6-foot-9, 242-pound Saiz, averaging 11 points and eight boards in his absence. But Saiz’s return will allow the Rebels to better match up on defense, where they’ve had to play a lot more zone than usual in an attempt to keep the 6-7 Hymon and others out of mismatches against bigger frontlines.

“(Saiz) just adds a completely different aspect to our game planning moving forward,” Kennedy said. “I certainly think we’ll be a much better team once he gets back and establishes his rhythm.”

Deep threat
The Rebels could use Saiz’s girth against Florida’s inside duo of Dorian-Finney Smith (6-8, 220 pounds) and John Egbunu (6-11, 255), who combined for 27 points and 17 boards in an 80-71 win in the teams’ first meeting, but Ole Miss’ guards will also have to be more of a nuisance for Florida’s bevy of shooters.

“Florida passes the ball so well,” Kennedy said. “It was a characteristic you could always count on with a Billy Donovan-coached team, and (Florida coach) Mike (White) has done a great job of continuing that. Their kids really pass the ball well, and we made some scouting report errors. They capitalized almost every time.”