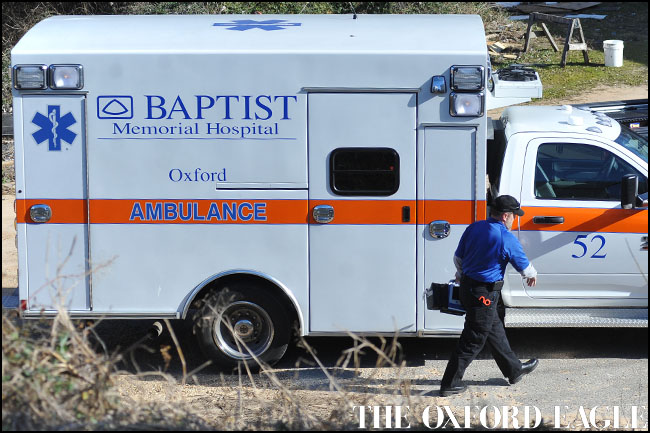 A Baptist Memorial Hospital-North Mississippi ambulance responds to a call in Oxford, Miss. on Tuesday, February 9, 2016.

When a heart attack or stroke occures, getting medical attention as fast as possible could mean the difference between life or death.

Forty minutes is not as fast as possible, but that’s how long one man suspected of having a stroke had to wait recently before an ambulance arrived to his College Hill home.

“There was no ambulance available here,” said Mayor Pat Patterson at a work session recently with the Board of Aldermen. “We had to call Batesville and ask them to send one.”

Patterson said there are three ambulances that run during the day and two in the evenings. If one of those ambulances is used to transfer a patient out of Oxford, that leaves one ambulance to cover the entire county.

With the way the city and county are growing, the aldermen questioned if Baptist intended to increase the number of ambulances.

On Tuesday, hospital administrator and CEO Bill Henning said the most recent contract is from 2011 between the Oxford Board of Aldermen and Lafayette County Board of Supervisors and was drawn up when Baptist purchased the current hospital, buying out of their lease, so Baptist could build a new, larger facility. The contract requires Baptist to provide ambulance service at the same level that was being provided at the time of the contract’s closing.

“We believe we are meeting this requirement at this time, and will continue to meet it as the community grows,” Henning said.

The aldermen discussed the possibility of allowing a private entity to come into Oxford to provide ambulance services and said they will check with the city’s legal department to review the contract with Baptist to see if there is any verbiage preventing the city from allowing another ambulance company provide service.

“We think Baptist provides outstanding health care for our community,” Patterson said. “With that said, the first responders across the community continue to express concerns about ambulance availability and response times to the extent that, on occasion, we have had to reach out to Batesville and Pontotoc to help provide ambulance service.”

According to the Journal of Emergency Medicine Service, the national average response time of an ambulance dispatched out by 911 is nine minutes.

“Over the past two years, Baptist North Mississippi’s average response time has been equivalent to the national average,” said Tracy Hall, emergency services director for Baptist. “This data includes response times to our outlying service areas such as Harmontown. This is a metric that is monitored on a regular basis to ensure Baptist is aligned with the national benchmark.”

Henning did not address whether Baptist would have issues with a private company supplementing coverage in Oxford, but said the hospital would continue to provide high-quality health care to the community for “many more decades to come.”