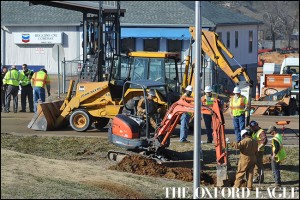 The Oxford Police Department and other emergency responders are at the scene of a gas leak on Jackson Avenue.

Police received the call of the gas leak about 12:45 p.m. and have shut down two intersections to clean it up.

Shut down are Walmart to West Oxford Loop to Highway 278. Travelers are being detoured and traffic is backed up.

According to OPD, there is not an estimate of the amount of the leak but OPD, the Oxford Fire Department, Lafayette County Emergency Management Agency and the city street department are on the scene.

There is not estimated time for completion at this point.