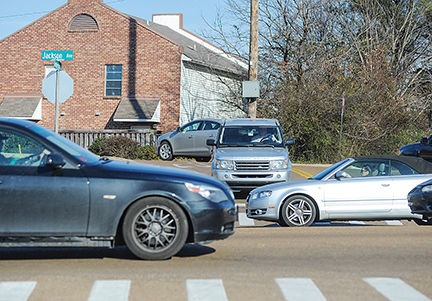 Traffic moves through the intersection of Jackson Avenue and Anderson Road in Oxford, Miss. on Thursday, February 11, 2016. Both the Lafayette County Board of Supervisors and the Oxford Board of Aldermen will be discussing, and possibly voting on Jan. 2, 2018, on whether to jointly fund a Comprehensive Traffic Study.

When city officials decided to take down the traffic light at the intersection of West Jackson Avenue and Anderson Road last spring, it wasn’t an easy pill to swallow for those living off Anderson who wanted to make a left-hand turn onto Jackson.

There is little argument that removing the light has helped the flow of traffic on Jackson. Prior to it being removed, the city tried a flashing light, which didn’t produce the desired results. Traffic was backing up past Fraternity Row during most weekdays.

With the light being gone the better part of a year now, some residents are still having a hard time adjusting and are cutting through the Jackson Place shopping center parking lot to get to the traffic light at Hathorn Road to be able to turn left at the light, rather than drive a few blocks west to Heritage Drive and turn at that light.

“This is being done at the request of the business owners who have called in and made complaints about the unsafe driving habits (in the parking lot),” East said.

If a driver needs to go east on Jackson Avenue, East said the best solution is for them to turn into Heritage Drive or go down to West Oxford Loop.

“What is happening is that some drivers are in a hurry, trying to find an easy way onto Jackson Avenue without regards for others’ safety,” East said. “I would suggest everyone leave earlier from their residence (along Anderson Road), that way there is no reason to take unnecessary risks with traffic because you’re running late.”

City Engineer Bart Robinson said that while he didn’t have exact numbers of any wrecks at the intersection, the change has produced the desired results.

“We monitored it closely after the signal was removed and accidents were reduced,” Robinson said. “Traffic flow delays on Jackson Avenue were reduced.”

The traffic citation drivers have received for cutting across the parking lot is called corner-cutting and carries a $200 fine.

An reader’s email to the EAGLE claimed it was just a way for the city to target students for ticket revenue.

“We’ve stepped up our efforts at this intersection with all drivers, not just student drivers, who cut through the shopping center,” East said. “Oxford is a growing community that does not have the means for drivers to get from one side of the town to another in five minutes any longer. We have to realize that there will be delays and plan for them.”