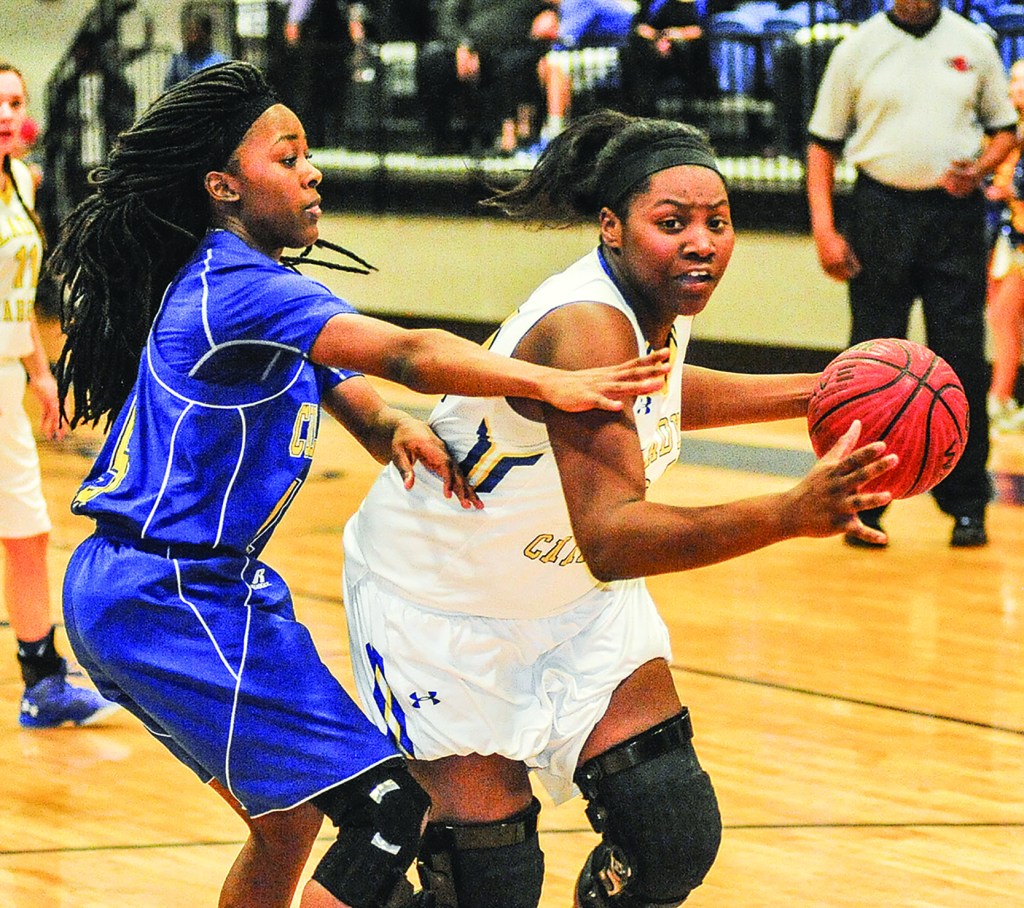 Oxford’s Kyla Malone (24) makes a move toward the basket against Coldwater’s Paris Jamison (15) in girls high school basketball Thursday at the OHS gym. The Chargers ended the regular season with a 70-47 win.

Senior Night was a rousing success for Oxford’s basketball teams.

Oxford’s boys blew past Coldwater for an 89-58 win while the girls’ team kept its winning streak alive with a 70-47 victory at the Oxford High gymnasium Thursday in the regular-season finale for both teams.

Jarkel Joiner scored a game-high 25 points for Oxford’s boys to lead three Chargers in double figures. Senior D.K. Metcalf filled up the stat sheet in his final regular-season home game, posting a double-double with 14 points and 15 rebounds to go with five assists and five blocks.

“I thought it was a great night where we recognized the seniors, and I think the spectators got their $5 worth,” Tyler said.

Oxford (17-9) had the advantage on the interior against the smaller Cougars with the 6-foot-3 Metcalf, 6-4 forward Will Swindoll (six points, 10 rebounds) and 6-5 forward KeMichael Coleman (three points, three rebounds) and used it to its advantage. When Coldwater’s defense tried to contain the Chargers’ beef inside by packing it in, it left Oxford’s shooters open for mid-range jumpers and 3-pointers.

The Chargers stretched a 35-29 halftime lead to double digits less than two minutes into the third quarter and coasted from there. Even if shots didn’t fall, Metcalf and Swindoll were usually there to help Oxford get second and third looks as the Chargers pulled down 57 rebounds.

“The ball was going inside to Swindoll, Coleman and Metcalf,” Tyler said. “We did want to play inside-out, and Metcalf’s doing a really good job finding shooters when the defense is collapsing on him.”

“That was kind of a reward. They worked hard all year, and we definitely wanted to honor them on their last home game,” Oxford coach Cliff Ormon said. “You always want to go out on Senior Night with a win.”

The Chargers (22-4) will carry a 14-game winning streak into next week’s region tournament, though Oxford had to work to send its seniors out with a win in their final regular-season home game.

Coldwater slowed the Chargers’ normally frenetic tempo to match Oxford basket for basket early on with Oxford leading 12-11 after the opening quarter and 29-23 at the half. But the Chargers took control with a 12-3 run to start the second half and continued to pull away.

“I don’t know if we were playing at the speed we normally have played at,” Ormon said. “We kind of challenged them coming out of the half with let’s go back to the way we played all year. Our seniors, I thought they really stepped up.”

Both teams will open region tournament play Tuesday at the OHS gym. Oxford’s girls will take on Saltillo at 4 p.m. with the boys to follow against West Point.