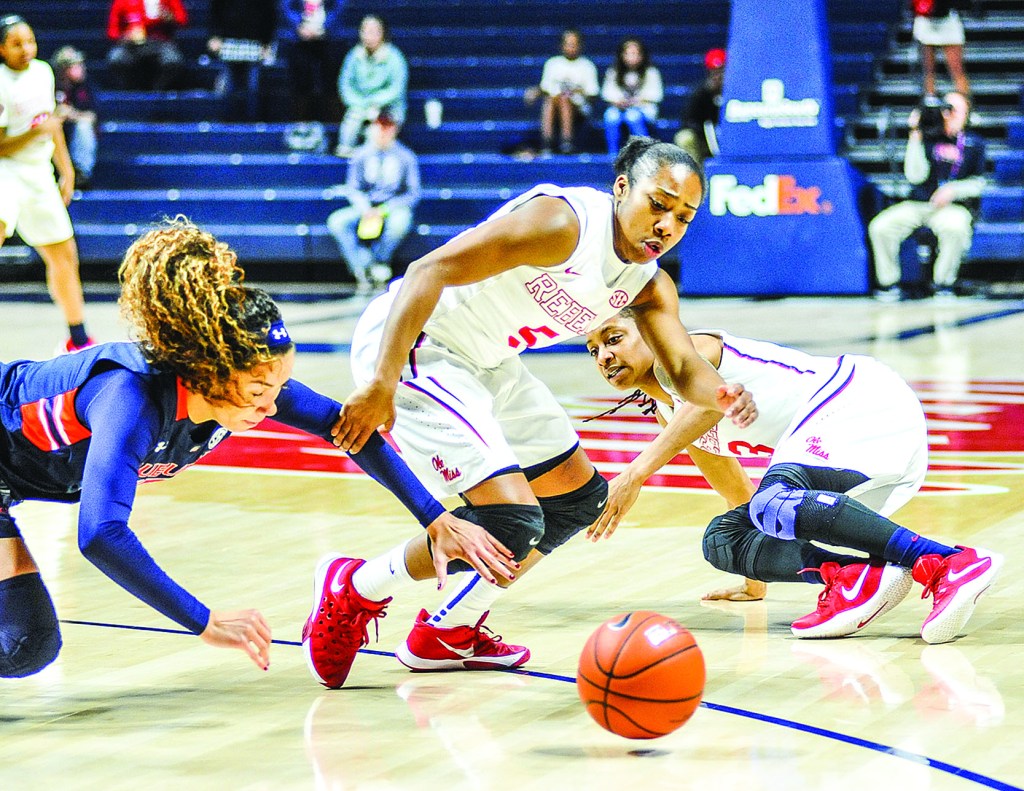 Auburn’s Jazmine Jones, left, and Ole Miss’ Erika Sisk (5) and A’Queen Hayes (3) go for the ball at The Pavilion at Ole Miss on Thursday. Auburn won 65-60.

With six games left in the season, Thursday night’s matchup with Auburn was a must-win if the Ole Miss women’s basketball team wanted make any kind of noise down the stretch.

A win appeared to be within the Rebels’ grasp, but a blown 12-point lead, fueled by Auburn’s Katie Frerking’s 17 points, in the fourth quarter led to a 65-60 defeat at the hands of the Tigers.
The loss extended Ole Miss’ losing streak to five games.

A combination of defense and a hot hand behind the 3-point line looked to be the winning recipe for Ole Miss (10-14, 2-9 Southeastern Conference). The Rebels caused Auburn (17-8, 7-5) to have 21 turnovers and scored 22 points off of them. They also recorded nine steals.

Ole Miss was also able to find a weakness in the Tigers’ defense, which would constantly leave someone open on the perimeter. The Rebels took advantage, shooting 8 of 29 from behind the line and 4 of 12 in the second half.

It was a game where Ole Miss could not coast to a win as multiple times it pulled out to a healthy lead only to have the Tigers manage to cut it down to single digits. The Rebels’ biggest lead was a 45-33 advantage with 5:43 left in the third quarter.

Auburn used a 24-10 run over the span of the third and fourth quarters to take a 57-55 lead with 6:38 left and was able to hold off the Rebels for the win. Ole Miss had a chance to force the game into overtime, but Erika Sisk’s 3-point attempt with seconds remaining was off the mark, hitting the back of the backboard.

Auburn’s Tra’Cee Tanner had a game-high 19 points while Janiah McKay chipped in 12 points.