‘Dores send seniors out with victories 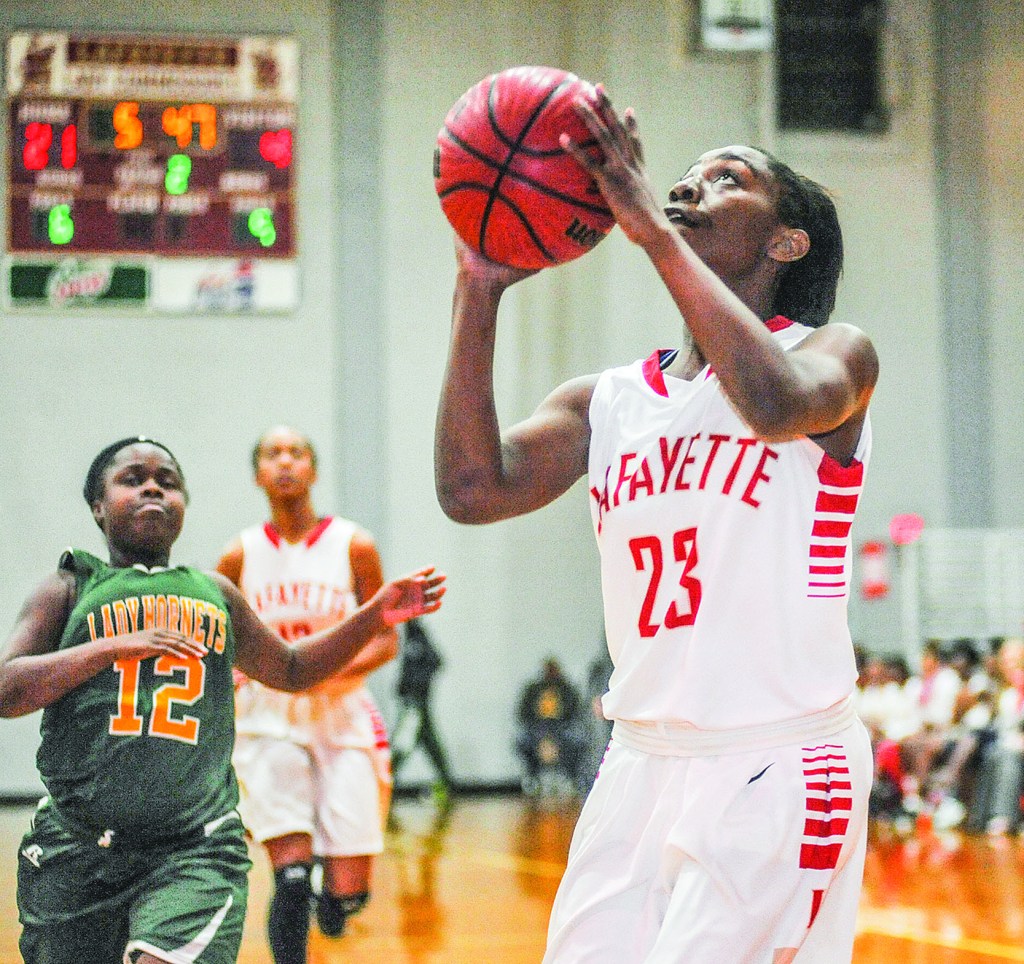 Lafayette’s Azariah Buford (23) shoots against Montgomery County in girls high school basketball Friday at the LHS gym. The Commodores ended the regular season with a 48-10 win.

It was the final test for Lafayette’s basketball teams before next week’s Region 2-4A tournament begins, and for the most part, the girls’ team passed with flying colors.

The Lady Commodores defeated Montgomery County 48-10 inside LHS gym Friday night. It was Senior Night as Friday marked the end of the regular season and final home games for Lafayette this year.

“I feel good,” Lafayette coach Shayne Linzy said about heading into the postseason. “We talked about momentum, getting into a rhythm offensively and defensively these last few ballgames. Trying to get us ready to go into division tournament play hitting on all cylinders. We’re there.”

There was not much drama to the game itself as Lafayette (18-6) took control early, having little resistance from the Lady Hornets. After a 17-point first quarter, the Commodores added on 18 more in the second for a commanding 35-4 halftime score.

Montgomery County was held scoreless in the second quarter.

“We were able to show patience when I asked the girls not to get into our transitional offense,” Linzy said. “The girls showed great patience and class to do what they did.”

Scoring came from up and down the roster for Lafayette with 11 players finding their names in the scorer’s book. Shelbi and Azariah Buford tied with a game-high 10 points each while Shaniyah Buford added eight points.

Eight of Azariah’s points came in the second quarter, helping ice the game for the Commodores.

“This is an eighth-grader who had a really good game her first game against Grenada, and the last time she played, she struggled a little bit,” Linzy said of Azariah. “She had some confidence issues then came back out the past two games and showed that she’s ready. She’s ready to take on a more active role this year.”

With all the work complete minus a practice on Monday, Lafayette will sit and wait to begin its postseason journey until Tuesday when the Commodores will play in the second round of the region tournament at Ripley High School against either Ripley or Rosa Fort at 4 p.m.

Boys survive for win
It was the final home game for Quin Jones, and he was going to make the most of it. The senior accounted for more than half of the Commodores’ points and hit to clutch free throws as the boys’ team held off a late rally by Montgomery County for a 46-43 win.

Jones scored a game-high 25 points while no other Commodore player reached double figures.

“When Quin plays well, we tend to play pretty well,” Lafayette coach John Sherman said. “We don’t score great, but when he’s scoring it takes some pressure off the other ones. It’s good to have him in there.”

Lafayette looked poised to cruise to its second win in three games as the Commodores had a comfortable 42-31 lead in the fourth quarter. They almost blew the double-digit lead as the Hornets went on a 13-2 run, cutting Lafayette’s lead to 44-42 with 17 seconds left.

Jones hit two free throws, and Montgomery County only hit one of its following three free throws to give Lafayette (6-13) the winning margin.

The Commodores will play New Albany on Monday at 5:30 p.m. in the first round of the region tournament at Ripley.