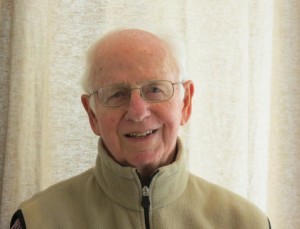 My father, Juan Jose Arrechea, was born July 29, 1884, in Narbarte, Spain-Province of Navarre. He lived to the age of 72 in Dequeen, Arkansas.

Having his church and civil records, Lois and I took a trip in May 1997 in hopes of finding his birthplace and my ancestry.

Leaving Memphis, we flew to Madrid. Our rented Renault was waiting for us at the hotel. The next morning, with Lois driving, we started our trip to Pamplona, about 28 miles from my father’s birthplace.

The Roman general, Pompey the Great, found Pamplona. The July’s Running of the Bulls is very well-known.

We spent the night and drove to Narbarte the next morning. We showed a workman on the street my father’s two records. He seemed to understand, notified his wife, took off his blue overalls and got in the back seat. He asked several friends with no success. He did say Sumbilla, the next village.

Here we found a store where several housewives were buying their daily long loaves of bread. One went to the school and returned with a teacher who spoke English.

We returned with her to her school where her children were jumping rope. I just had to join and jump with them — I guess I’ll never grow up! We returned our first Basque friend to Narbarte, paid him a generous “thank you” and returned to our hotel in Pamplona.

The next day she took us to the priest’s quarters. After much intense searching, he found the records of five generations. We were thrilled.

Following is the ancestry information we discovered by name, relation, date of birth and location:

During Spain’s dictator, Francisco Franco’s reign of 36 years, he tried to have all Basques church and civil records destroyed. Somehow, our records were saved.

It’s exciting to know that for over 300 years my ancestors lived and worked in this area, attended church, took care of their families, plowed their fields, harvested their crops, looked after their sheep and cattle, probably, cut some timber and I know some fished the river.

We found the church in Sumbilla-San Andrea Apostal. On each side of the tower was a bell and a clock. (We wished we could have heard the bell ring).

A covered courtyard was floored with quarried stone, a family name was chiseled in each. We found ARRECHEA on one.

We stopped twice for a meal at a truck stop between Narbarte and Sumbilla. We noticed a refrigerated show case that contained 2-pound packages of sheep cheese. I purchased two. We nibbled on that good cheese for a while when we got home. What a nice warm reminder we had of our Basque experience.

Soon after my father was born, his mother died. His grandparents raised him until he was 16.

I remember him telling me that as a boy, he joined his friends in the small village festival and danced in the street. (I guess I get my love for dancing from him, even in the streets.)

He also told me that when the men were working in the field, for an afternoon snack, the women brought hard bread and wine in a “Bota.”

In the meantime, about 1890, my father’s father left Spain for better opportunities and went to Havana, Cuba. In 1900, he sent for my father who boarded a ship at San Sebastian. My father gained employment and learned the pipe fitter’s trade in the sugar refineries.

The reason we didn’t search the Sumbilla cemetery, we planned to travel a distance to where my father had boarded the ship to be with his father in Havana, Cuba.

We enjoyed 11 days in Spain, seven of these in the tint of the green Basque countryside, with the pastures of tilted hillsides, almost vertical. The sheep, even the cows, were pinned as they grazed. The Basque area of Spain is often called “Green Spain.”

John Arrechea is an Oxford resident and can be reached at jonlo@maxxsouth.net.