HELPING OUT: Supporting cast helps Rebels pull away for win over Hogs 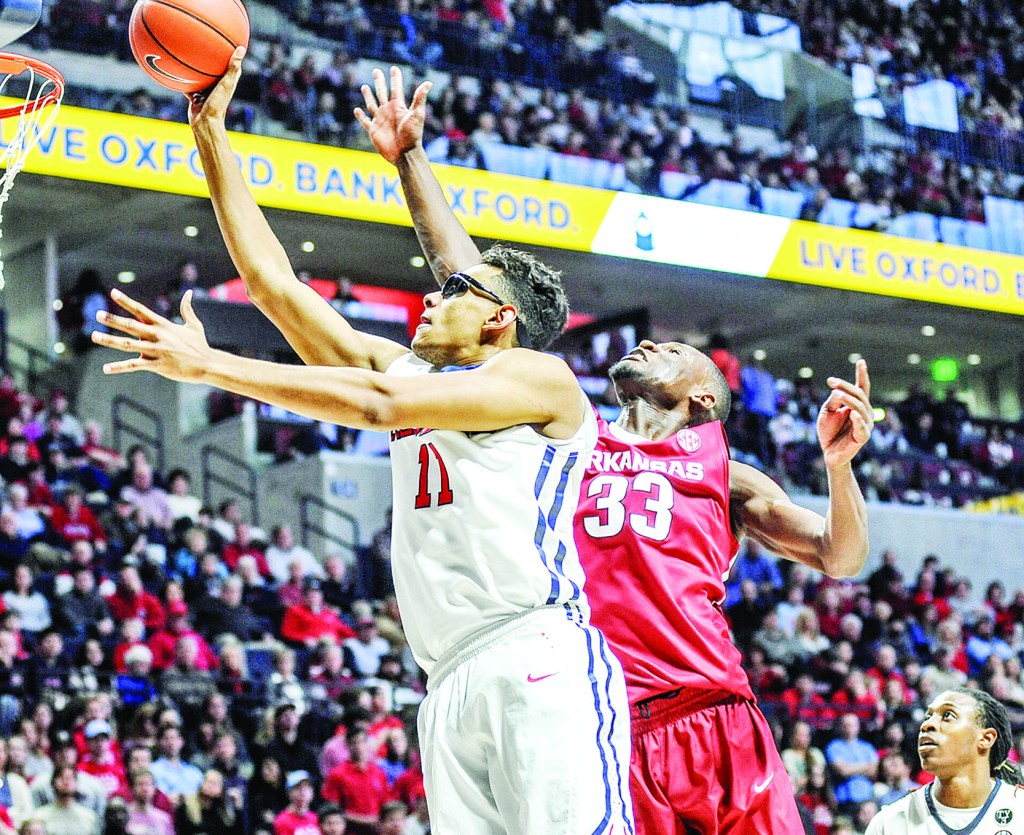 Ole Miss’ Sebastian Saiz (11) scores and is fouled by Arkansas’ Moses Kingsley (33) at the Pavilion at Ole Miss on Saturday. The Rebels won 76-60.

Andy Kennedy has been pleading all season for Stefan Moody’s teammates to help out the Southeastern Conference’s leading scorer more consistently on the offensive end.

Tomasz Gielo, Marcanvis Hymon and Anthony Perez combined for 36 points, helping pick up the slack for the Rebels until Moody got going in a 76-60 win over Arkansas at the Pavilion.

Gielo finished with 15 points while Perez had 11. Hymon recorded a double-double with 10 points and 11 rebounds to help Ole Miss (16-9, 6-6 Southeastern Conference) get back to .500 in league play with a trip to No. 15 Texas A&M looming Tuesday.

Sebastian Saiz started for the first time since the Florida game on Jan. 16 and finished with 11 points and four rebounds before fouling out late. The junior forward has played 39 minutes since returning from the surgery on his partially detached retina in Ole Miss’ rematch with the Gators earlier in the week.

“We need everybody. We need to be on the same page,” Gielo said. “The cool part about our team is everybody can have their night on any given game.”

Struggle for Moody
Moody still had a team-high 17 points but didn’t make his first field goal until 17:44 left in the game. He was just 4 of 17 from the field and ended a string of 37 games with a made 3-pointer, failing to reach the 20-point mark for just the fourth time in his last 20 games.

But the other contributions combined with the Rebels’ defense, particularly on the perimeter, helped Ole Miss claw its way back from an 11-point deficit in the first half. Junior center Moses Kingsley led the Razorbacks (12-13, 5-7) with 19 points, but Ole Miss took away Arkansas’ outside threats. The Razorbacks began the day leading the SEC in 3-point field goal percentage but hit on just 20 percent (4 of 20) from deep.

Anthlon Bell (16) was the only other player in double figures for the Razorbacks, who were held to 18 percent shooting (5 of 28) from the field in the second half. Dusty Hannahs, Arkansas’ leading 3-point shooter, was marred by foul trouble and didn’t score in just 16 minutes.

“(Hannahs) picks up two (fouls), and they roll the dice,” Kennedy said. “He gets the third on a charge, he gets the fourth a little late. Next thing you know, he’s a non-factor and he’s a guy that’s getting them 15 or 16 a game. They need him as a spacer, so without him on the floor, they had more drivers.”

Moody had just one point at halftime while Kingsley (15) nearly matched his scoring average of 15.9 points by then. But the Rebels got 12 first-half points from Gielo on 4 of 6 shooting to stay close before pulling away in the second half.