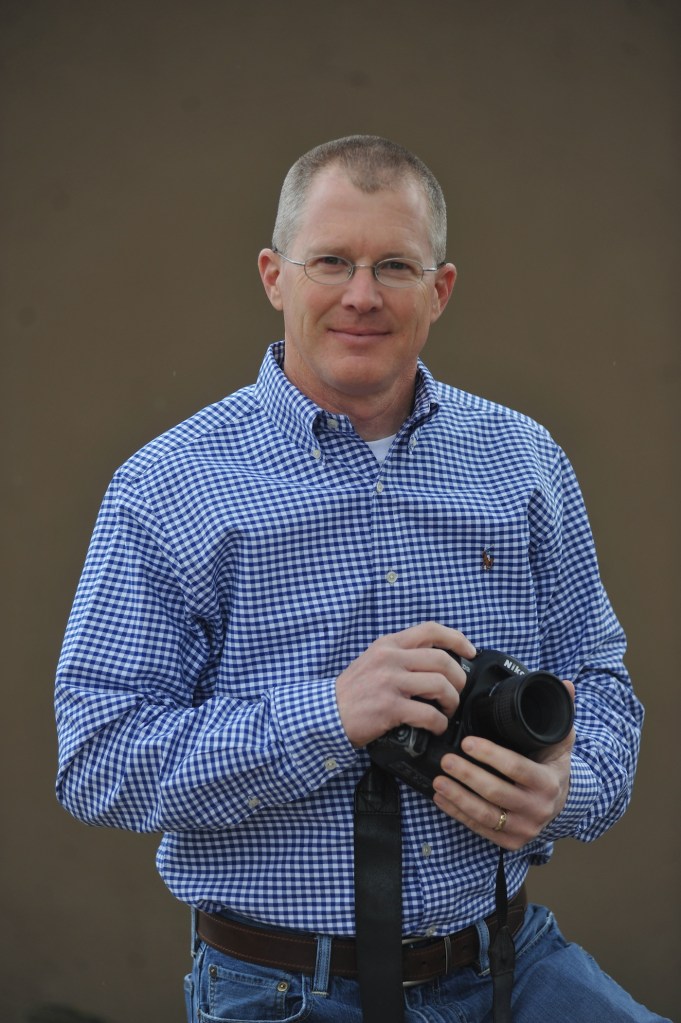 Rick Addy, in Oxford, Miss. on Friday, March 27, 2015, is the owner of Addy Photography and Ward 1 candidate for the Oxford Board of Aldermen.

Having a successful photography business for more than 25 years takes hard work, a strong work ethic, excellent customer service skills and knowing how to plan, organize and budget. Ward 1 alderman hopeful Rick Addy says he has those skills and more to serve his fellow Oxonians.

Addy will face attorney Jordan Bankhead Tuesday during the race for the Ward 1 alderman seat left open by Jay Hughes who is now Addy serving in the House of Representatives. Polls will be open from 7 a.m. to 7 p.m. at the Oxford Conference Center. Only Ward 1 residents will be voting.

Addy, 51, was raised in Oxford and is the owner of Addy Photography, the largest school portrait businesses in north Mississippi, serving 90 schools.

“Creative thinking and good decision-making skills are also critical,” he said recently. “I enjoy my profession and have been privileged to network with numerous other individuals and businesses in the U.S. and worldwide, and currently serve on several national advisory boards. I’ve also been nationally recognized in both busi- ness and portrait awards throughout my career.”

Addy said he chose to run to give back to the community that has given him “so much” throughout his life.

“However, I would not just throw my hat in the race unless I was qualified, and that I am,” he told the EAGLE. “Through the years, as a concerned citizen, I have attended and voiced my opinion when needed at Board of Aldermen meetings, Planning Commission meetings, Vision 2020 and 2037 gatherings and numerous others dealing with city related business.”

Addy said he knows many of the aldermen already and has spent a good amount of time speaking to them, city employees, department heads and the mayor in regards to his concerns about Ward 1 and throughout Oxford.

“I have a level of confidence entering into this position,” he said. “I understand the level of commitment it takes to be an alderman. It’s not a simple or easy job, not to be taken lightly, and frankly, quite time consuming. I am prepared to give my time and my abilities to make sure we preserve, protect and grow Oxford in a care- fully planned way.”

If elected, Addy said his first goal would be to keep in touch with the people of Ward 1 and help the board help the city grow.

“With this growth continuing, we need to remember and realize what we love about Ward 1 in the first place —  a wonderful array of neighborhoods, great schools, green space and tree canopy.” He said. “As we expand and grow, all parts must be protected with responsible proper planning.”

Supporting and growing the city’s first responders and making sure the city has the infrastructure to accommodate the unprecedented growth are also on Addy’s list of goals.

“The influx of individuals desiring to move to this unique town, whether it be retirees, young families, university students, professors, families seeking an excellent education for their children in our schools, people seeking a second home due to their love of Oxford, increases the need for additional first responders, police, fire, ambulance and rescue, to assure the safety and security of our citizens,” he said. “In Ward 1, sig- nificant issues have arisen with drainage and water runoff, causing overflow of drainage ditches and flood- ing of yards, roads and even homes. Continuing to maintain and update our current infrastructure and providing resources and manpower in those departments responsible for the basic infrastructure is vital.”

Addy says his experience as a business owner, a former Oxford Police Department reserve officer, being a good listening and being invested in Oxford are just some of the qualities that makes him the best candidate.

“I am committed to keeping Ward 1 a place we all are proud to call our neighborhood,” he said. “I have lived in Ward 1 for the past 21 years. I have been a voice for our ward in the past when we felt threatened by development that we felt was not properly planned. I feel everyone has a voice and needs to be heard, and I will be there to listen, and represent my neighbors.”