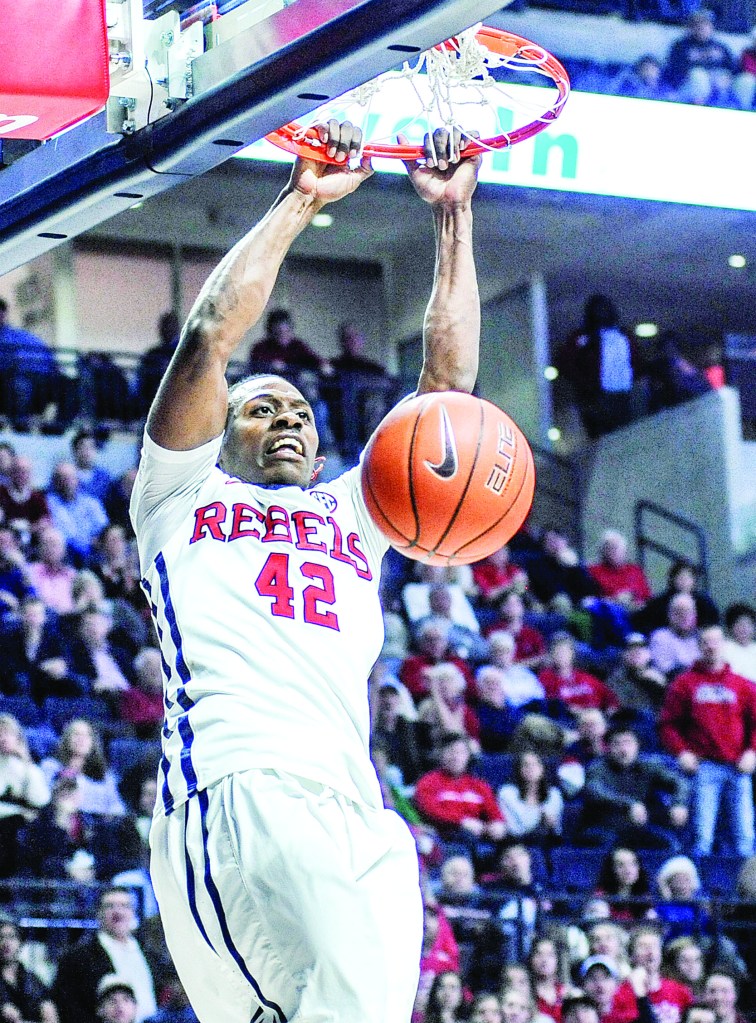 Ole Miss’ Stefan Moody (42) and the rest of the Rebels will try to continue a late-season push tonight at Texas A&M.

Time is running out for Ole Miss’ men’s basketball team.

Less than a month remains before the NCAA Tournament Selection Committee selects the at-large participants to go with the automatic bids that will make up this year’s field of 68. Andy Kennedy’s team is usually one that’s being dissected as a bubble team this time of year, but the Rebels aren’t even in the discussion right now.

Ole Miss’ win over Arkansas on Saturday got the Rebels (16-9, 6-6 Southeastern Conference) back to .500 in league play with just six games to go in the regular season. That record has Ole Miss tied for eighth in the league standings with only one game left on the schedule against a team projected by ESPN’s Joe Lunardi and CBS Sports’ Jerry Palm to make the tournament as of Monday, though the Rebels aren’t conceding their postseason fate to the NIT just yet.

“Anything’s possible in this league,” Ole Miss forward Sebastian Saiz said. “Everybody is beating everybody. We’ve got (six) more, and after that we’ve got the (SEC) tournament, so we’re still in that bubble.”

Any realistic shot Ole Miss has at getting in the at-large picture would have to start with a win tonight at Texas A&M (8 p.m., ESPNU), which would give the Rebels the kind of quality win their resume lacks. Ole Miss, ranked 86th in the NCAA’s updated RPI rankings, is just 3-6 against the RPI top 100 and has just one win over a team ranked in the top 50 (Alabama at No. 37).

The rest of the schedule is problematic for the Rebels even if they knock off the Aggies, who sport an RPI of 26. Having already lost out on potential resume builders against Florida, South Carolina and Kentucky, Ole Miss will play four of its final five games against teams with the worst records in the league, the lone exception being a trip to Georgia on Feb. 27.

Must wins
Wins over Auburn, Missouri, Mississippi State and Tennessee are all but a necessity over the next three weeks to keep from adding sub-100 RPI losses to the one Ole Miss suffered against George Mason back in November, and a deep run in next month’s SEC tournament may be necessary, too. But none of that will likely matter unless the Rebels can find a way to get a win over the Aggies (18-7, 7-5) tonight in a game some players feel they have to have.

“I would say yes,” senior forward Tomasz Gielo said following Ole Miss’ win over Arkansas. “There’s no time to calculate whether we can let that one slip. We’ve just got to go out there and play every game because you think one game may not matter in the long run, but every game is going to matter.”

The Rebels got a boost with Saiz returning to the starting lineup against the Razorbacks. Saiz, who missed six of the previous seven games after having surgery on a partially detached retina, was the third starter to miss extended time this year because of an injury along with Stefan Moody, the SEC’s leading scorer, and Martavious Newby.

Saiz, who’s averaging 12.2 points and 9.3 rebounds a game, has played 39 minutes in his first two games back and is working himself back into shape. Ole Miss coach Andy Kennedy said Moody seems “to be back to his explosive self” after straining a hamstring last month while Newby, who had five points, six boards and four assists against the Razorbacks, hasn’t been slowed by an eye injury that kept him out of two games earlier this season.

Ole Miss has also gotten more offensive consistency from its support cast, specifically Gielo. The graduate transfer is averaging 16.8 points and shooting 52 percent (12 of 23) from 3-point range over his last four games after shooting just 21 percent from the field in the seven previous games.

He went 5 of 9 from the floor and 3 of 5 from beyond the arc for 13 of his 15 points against Arkansas, helping Ole Miss get a rare win without Moody reaching the 20-point mark.

“There’s no more excuses for us. We’ve got everybody back,” Gielo said. “The team is healthy relatively. Everybody is able to play, so now it’s just time for us to step up and make that run when it matters.”

The Rebels don’t have any more time to waste.

“I still do believe this team has a run in it,” Kennedy said. “My hope is it can start immediately. As long as there are games on the schedule, there’s opportunity. I hope we can take advantage of those.”