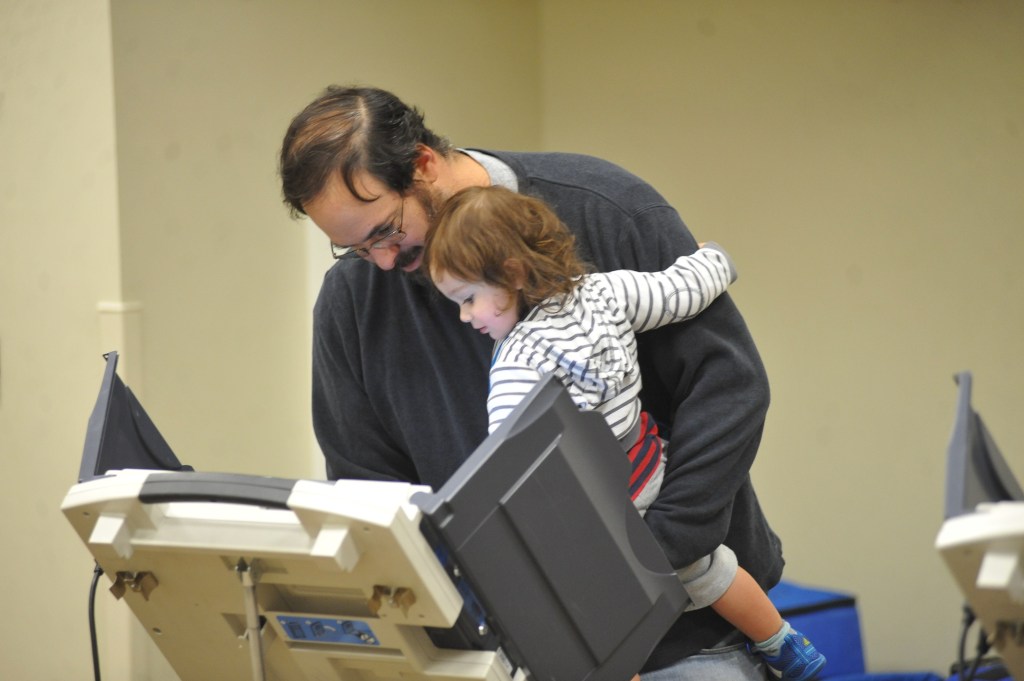 Marc Lerner, left, with Shoshana Rifkind-Lerner, votes in the special election for Alderman Ward 1, at the Oxford Conference Center in Oxford, Miss. on Tuesday, February 16, 2016. Jordan Bankhead is facing Rick Addy in the election to replace the seat vacated when Jay Hughes was elected to the Mississippi legislature.

For folks living in Ward 1 of Oxford, today is the day to head on out to the Oxford Conference Center to cast your vote for the candidate who will repre- sent Ward 1 on the Oxford Board of Aldermen.

Only Ward 1 residents will be voting for one of two candidates vying for the seat that was left open when former alderman and now House Rep. Jay Hughes won the election in November to represent Oxford in Jackson.

Both candidates say they are running for office to give back to the community where they live, work and raise their families.

Bankhead said the city must deal with planning for the future now, so the city can build the needed infrastructure necessary to accommodate the growth.

“When we talk about infrastructure we should not just be thinking about roads and sewers, but also green space, schools and public services such as adequate fire and police protection,” he said recently. “We need to stay ahead of the curve in these areas or we will become a victim of our own growth.”

Addy also believes dealing with the unprecedented growth will be Oxford’s No. 1 challenge over the next several years.

“The growth weighs heavily on our current infrastructure and pushes the limits on our basic amenities such as our water and sewage systems, roads, electrical grids, drainage ditches and sidewalks,” he said. “Continuing to maintain and update our current infra- structure and providing resources and manpower in those departments respon- sible for the basic infrastructure is vital.”

Both candidates had to obtain 50 signatures to qualify to run in the election. The winner of the election will serve as Ward 1 aldermen for the remainder of Hughes’ term that ends in June 2017. At that point, the alderman can decide to run again to retain the seat. As an alderman for the city of Oxford, the winner will work with the mayor and fellow board members to make policy decisions in accordance with procedures and responsibilities set out in state law. The Board of Aldermen is composed  of seven members. Six aldermen are elected according to their respective wards, and one alderman is elected at-large.