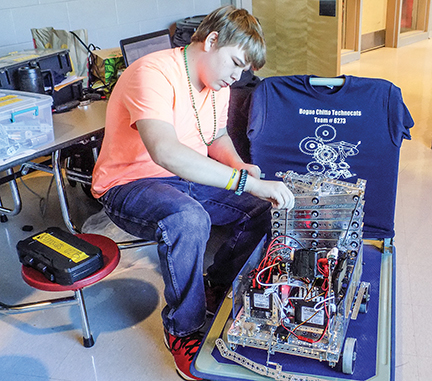 Robotics competitor Bruce Smith, of Bogue Chitto, works on his team's robot "Alpha" to prepare for the day's tournament.

Four robotics teams will continue to the state tournament after competing in the North Mississippi First Tech Challenge Qualifier all day Saturday.

“It’s a lot of fun to have groups from different parts of the state compete in our tournament,” Robotics team coach Taylor Langford said.

The four qualifying teams were the East Rankin Robotics, Simpson County Future Engineers, Future Bot Innovators from the Floyd and Bessie Johnson Foundation and the Technocats from the Bogue Chitto School District.

The team that won both of their matches, as well as the overall judge-based Inspire Award, was the Techno Warriors Advance team from Central Mississippi Robotics.

The North Mississippi Qualifier is one of four regional competitions robotics teams can qualify for state. Some teams had previously qualified in the South Mississippi FTC Qualifier before coming to Oxford for the extra practice.

The First Tech Challenge age division of robotics requires a team of students to design, build and program a robot to complete a varying task every year.

This year, the task was to pick up blocks and move them into a specific bin; a task much harder than it sounds.

Fifteen teams competed in three separate rounds of judging. Teams were scored on creativity, community service, leadership and other skills. Afterwards, each team had a chance to show off engineering skills in the arena.

The winning teams will continue to the state tournament held in Oxford later this year.

Additionally, judges Jose Rodriguez, Garrett Reed, Blake Fullmer and Will Andrews were former students from Lafayette High School. Most of them are currently enrolled in engineering programs at the University of Mississippi and some have already graduated.

Langford said it has been good for Lafayette teams members to serve in supporting roles at competitions in recent years.

“It’s really good for them to take on a leadership role in robotics,” Langford said.