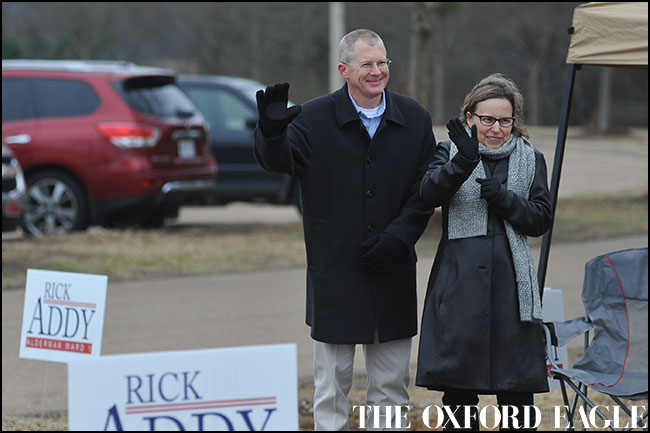 Candidate Rick Addy, left, and his wife Megan campaign in the special election for Alderman Ward 1, at the Oxford Conference Center in Oxford, Miss. on Tuesday, February 16, 2016.

Local photographer and business owner Rick Addy will serve his fellow Ward 1 residents on the Oxford Board of Aldermen until at least June 2017.

Addy received 335 votes against his opponent Jordan Bankhead, an attorney, who garnered 156 votes.

Both men qualified in early January to run for the seat left open by Jay Hughes who resigned in December after winning the election in November to represent Oxford in the Mississippi House of Representatives.

The Ward 1 precinct at the Oxford Conference Center closed at 7 p.m. Within about 40 minutes, the unofficial results of the election were posted showing Addy as the winner. There are about 2,500 registered voters in Ward 1 and only 491, or 20 percent, voted.

“I am grateful for the support from my family, neighbors, friends, everyone in Ward 1 and all the people of Oxford for your overwhelming support,” Addy said Tuesday night. “Thanks to all of you who took time out of your day to vote. I look forward to being Ward 1’s new alderman. Oxford — what a wonderful place to call home.”

Before Hughes became Oxford’s representative in the House, he served as alderman for about half his term. During that time, he kept his ward up to date with goings-on inside the city with almost daily email blasts and social media posts

Addy said he plans to continue that open communication.

“While campaigning and speaking with many residents of this ward, I heard many compliments on our previous alderman, Jay Hughes, and his ability to communicate how the city was doing and where it was headed,” Addy said. “I will continue this feedback to the neighbors throughout Ward 1 and Oxford.”

Bankhead said meeting his neighbors in Ward 1 was the most rewarding experience for him during his six weeks of campaigning.

“Thank you for inviting me into your homes and sharing your civic cares and concerns the past several weeks,” Bankhead said. “Meeting you and earning your trust has been the most gratifying part of this campaign.

“I also want to congratulate Rick Addy for a good race and a well-earned victory. The relationships he and his family built over the past several decades certainly paid off yesterday and that is a tribute to the Addy good name. I tried my best to run a clean and issue-based campaign and let the voters decide. They have made their decision and I accept it and remain committed to helping Oxford in any way I can going forward.”

Addy, 51, was raised in Oxford and is the owner of Addy Photography, the largest school portrait businesses in north Mississippi, serving 90 schools. He and his wife, Megan have lived in Ward 1 for 21 years with their three children.

Addy will serve as Ward 1 alderman for the remain- der of Hughes’ term that ends in June 2017. At that point, he can decide whether to run again to retain the seat.

The Board of Aldermen is comprised of seven members. Six aldermen are elected according to their respective wards, and one alderman is elected at large.