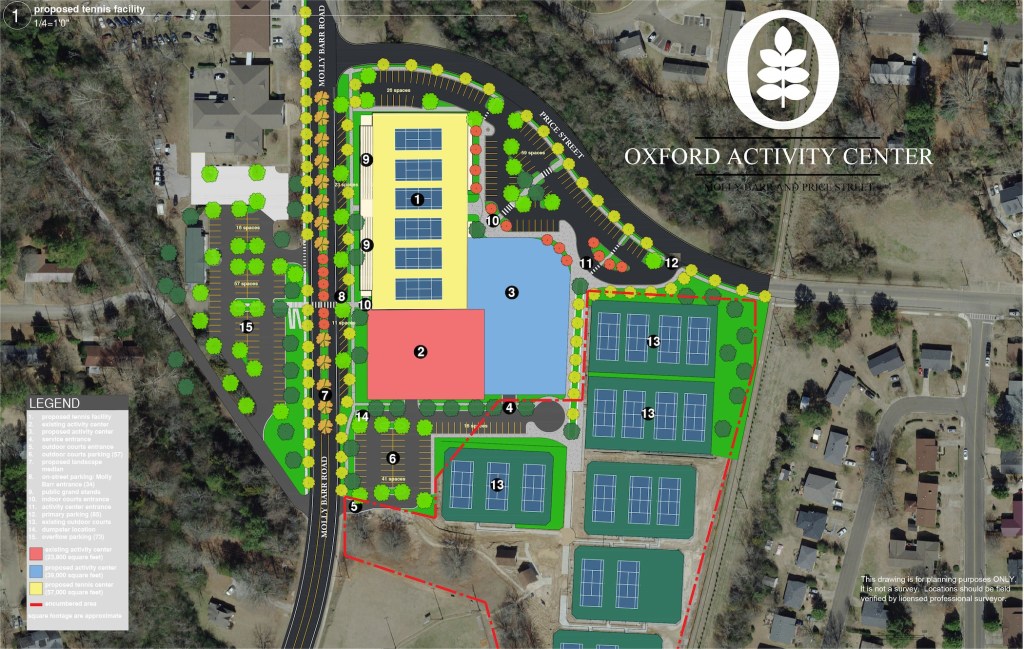 Public Works Director Bart Robinson presented a preliminary design Tuesday to the Oxford Board of Aldermen of what a six-court indoor tennis facility on the Oxford Activity Center campus could look like once the city and the University of Mississippi finalize details.

Robinson presented the planning-only schematic to the aldermen during their regular meeting Tuesday evening that shows the six indoor tennis courts, along with an expanded Activity Center once Price Street is relocated north around the existing overflow parking lot across from the center.

Robinson asked the aldermen to allow him to advertise for bids to begin the process of moving Price Street which would allow more room near the existing center for the expansion and the indoor courts, which would be built as a joint project between the city and the university.

University officials approached the city last summer about building an indoor tennis facility on city-owned land that the city would maintain and manage.

The university would build the facility and take on the costs associated with land preparation and construction of the facility.

University leaders said campus no longer had the space for the indoor courts and didn’t want the costs of management and maintenance of a new building that would only be used a couple dozen times a year by the university.

The university’s tennis team would have priority to use the courts, but when not in use they would be open to the community.

The Oxford Park Commission is waiting for the university to hire a professional designer and Robinson said he suspects OPC also will hire a designer for the activity center expansion.

“We’ll be talking more in the near future about funding and it will probably end up being done in two separate parts,” said city attorney Pope Mallette. “Hopefully, it will all dovetail nicely.”

Robinson reiterated the drawing was not an official design but one drawn up to show a possible layout for the courts and expansion.

“One thing to note is the reduction of parking on the overall site,” Robinson told the aldermen. “Currently, there’s 200 sites now. With this design, we lose about 30 spaces. We’re going to need to pick up some park- ing somewhere and we’re currently looking at a few options.”

Alderman Preston Taylor asked if the preliminary plans encroach on property where the Burns-Hammitt Hill United Methodist Church currently sits on Molly Barr Road. Robinson said none of the land con- sidered for additional park- ing is on the Burns’ prop- erty.

“We’re looking at land adjacent to the church and near the police station,” Robinson replied.