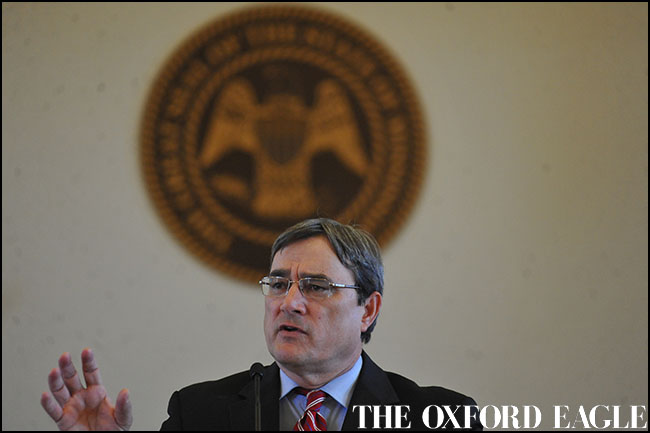 Tuesday was no ordinary day for 20 individuals whose lives were changed for the better.

Amanda Cocke was one of those who successfully completed the Third Circuit Drug Court program.

The New Albany woman gave an impassioned testimonial about the program, which saved her life from alcohol and drugs, during a graduation ceremony held at the Lafayette County Courthouse.

“By the grace of God and this drug court program, I no longer suffer from those conditions,” Cocke said.

She said the drug court program made her want to live again.

“It’s not just doing without drugs. Drugs and alcohol are a symptom of the problem,” Cocke said. “I am employable. I have a job that I love and I am able to give back just a little bit of what they’ve given me.”

She said even though she had a perfect childhood there was always something she felt was missing in her life. She thought drugs and alcohol could fill the void. Completing the drug court program proved that wasn’t the case.

“I have been restored and completed because this huge void that I’ve always had in my soul is no longer there,” Cocke said. “It’s filled with the love of the people who cared about me and been through this.”

She finally surrendered to the drug court program when she turned herself in at the Union County jail and felt in her heart it was time and thanks God that she did.

“They gave me that one last chance and I was finally willing to take it,” Cocke said.

She said it was the people who run the drug court program that made a difference in her life and saved her.

“These people did not give up on me when I had given up on myself,” Cocke said. “As much hell as I have gone through, today I have the capacity to feel that much love and that much joy.

“I’m better than I ever thought I would be. I have a relationship with God that I never would have imagined possible.”

For the past eight years, the Third Circuit Court Drug Court has held graduation ceremonies for individuals who have completed the program. Currently there are 206 participants. It’s a program Circuit Judge Andrew K. Howorth said changes lives.

“It’s a moment we look forward to every six months,” Howorth said of the graduation event.