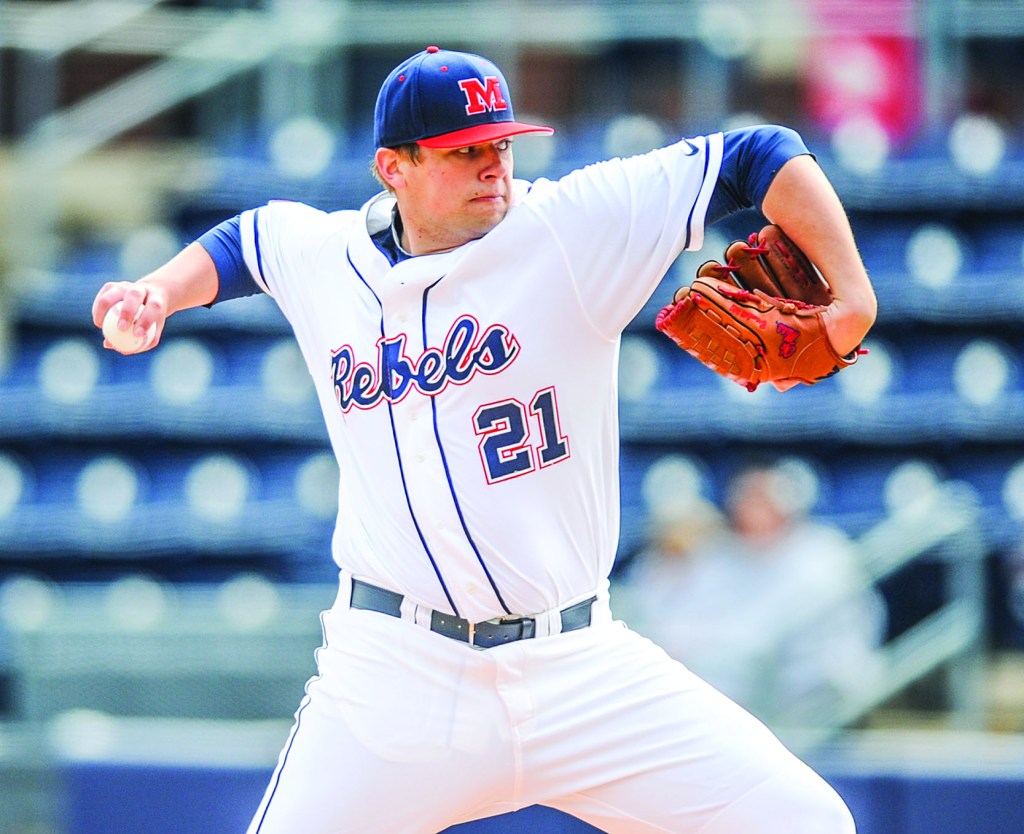 Ole Miss’ Brady Bramlett (21) leads a weekend rotation that includes two pitchers with little to no Division I experience.

When Brady Bramlett decided to forgo his MLB Draft selection and return to Oxford for another season with Ole Miss, it automatically made him the most experienced returning pitcher on the staff.

On Tuesday, that experience was rewarded when Bramlett was named as the Friday starter of the Rebels’ weekend rotation by head coach Mike Bianco. The announcement came during Ole Miss’ media day inside the Bullpen Club at Oxford-University Stadium.

Bramlett was the Saturday starter a year ago with Christian Trent holding down the spot as Ole Miss’ ace.

This year, it belongs to him.

“I’m excited,” Bramlett said. “The goal for any starter is to give your team the best chance to win and, especially on Friday, to set the tone for the weekend. I’m thrilled to be in that position and I’m confident stepping into that role, and I think it’s going to be a special year for our staff and the team.”

Joining Bramlett on the weekend will be junior college transfer Chad Smith on Saturdays with Sean Johnson closing things out on the mound Sunday.

Smith is the newest of the three with Johnson having been a part of the team last year before being out for the year after the first weekend.

The former Wallace State Community College standout went 3-1 as a sophomore and had a 3.09 earned run average in nine appearances, including two starts. He posted 42 strikeouts in 35 innings pitched.

“It’s a big honor to be jumping in there right away,” Smith said. “I’m looking forward to it and giving us a chance to win on Saturday. The expectations are really high as they always have been. It just boils down to going out there and competing every time.”

Bramlett will be the only pitcher who has had experience at this level, including experience against the Southeastern Conference and top-25 caliber teams. With a big home weekend series against No. 2 Louisville next week, the lack of big-game experience is not something Bramlett is concerned about with his teammates.

“We’re in the toughest conference in the country. Anybody can beat anybody on a given day,” Bramlett said. “I have no doubt in my mind that those two guys will be successful. Honestly, anybody on our staff has the ability to step on the mound and get the job done. You learn quickly in this league, so you better be ready for the bullets.”

The Sunday starter has been the bugaboo for Ole Miss in recent seasons. There was always a No. 1 and No. 2 guy on staff, but a solid No. 3 was hard to pin down last season with several players trying their luck at becoming the Sunday starter.

Heading into the 2016 campaign, knowing who all three starters will be is something that is giving the Ole Miss staff a sigh of relief.

“It’s a huge confidence booster,” Bramlett said. “Especially having younger guys and inexperienced guys, to know what their role is from the beginning is a huge step in the mental game when it comes to playing.”

Bianco announced that junior left-hander Wyatt Short will be the closer heading into this weekend.

Seasoned bullpen
Over his first two seasons, Short has recorded 13 saves with 10 of them coming last season. He also has more than 70 innings pitched worth of experience under his belt.

Along with Short, Will Stokes will be used as a primary arm out of the bullpen along with senior Matt Denny. Denny was named a captain along with Colby Bortles and J.B. Woodman.

“When we went to Omaha (in 2014), we had a lot of good arms. Last year, I think we kind of struggled with that,” Denny said. “This year, I feel really good about it. We got Wyatt coming back and Will Stokes. Guys that are really reliable coming out of the bullpen.”

Bianco noted that true freshman Andrew Lowe from Bossier City, Louisiana, junior college transfer David Parkinson from Florence-Darlington Tech and freshman James McArthur are candidates to be midweek starters or even middle relief guys to set up Stokes and Short on the weekend.