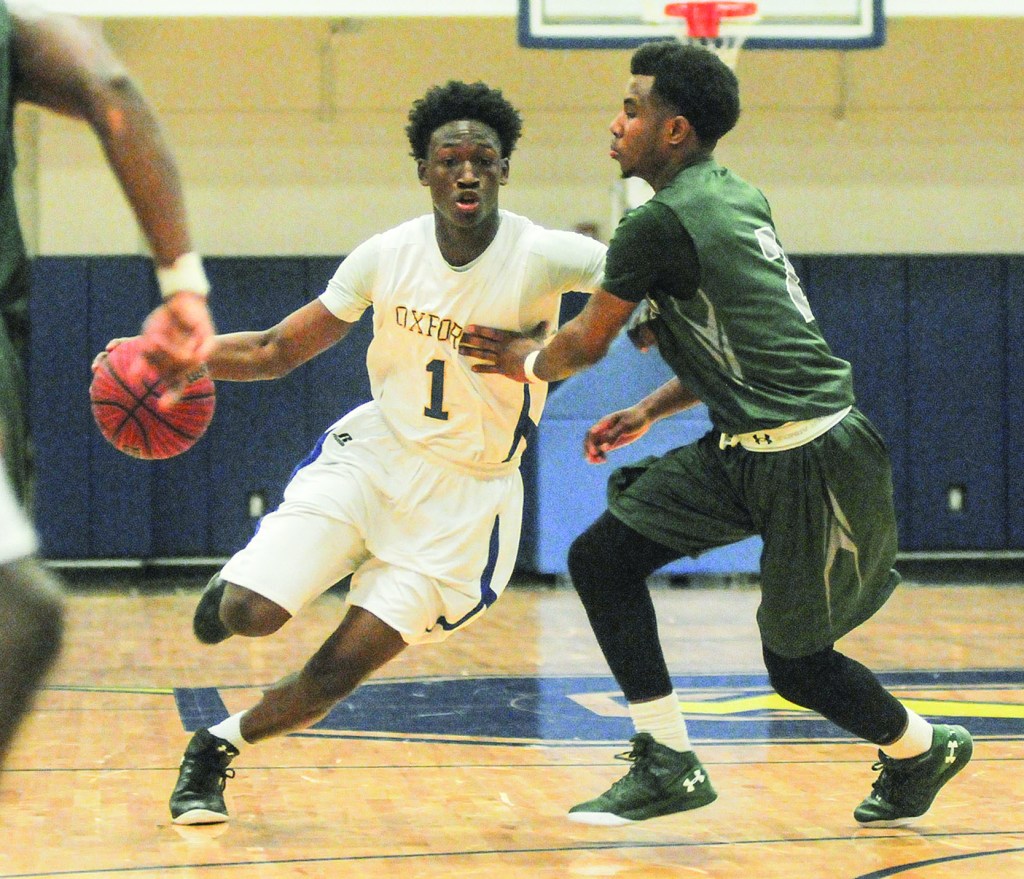 Oxford’s Jarkel Joiner (1) drives past West Point’s Shandarius Westbrook during Tuesday’s Region 2-5A tournament game at the Oxford High gym. Joiner scored a career-high 45 points as the Chargers advanced to the tournament title game with an 89-78 win.

Oxford’s boys basketball team finished with the worst record in its region during the regular season. Now the Chargers have a chance to be the best in their region tournament.

The Chargers advanced to the Region 2-5A tournament championship game with an 89-78 upset of top-seeded West Point on Tuesday at the Oxford High gym. The Chargers (18-9) are the No. 4 seed in the four-team tournament after finishing 2-4 against region foes in the regular season, but their first win over the Green Wave in three tries this season has them on the brink of a No. 1 seed in the MHSAA Class 5A playoffs should Oxford get past Saltillo in the tournament final Friday night.

“I just felt like we were focused,” Oxford junior guard Terry Williams said. “Everybody knew what we had at stake, and nobody wanted this season to be over. I told Jarkel (Joiner) yesterday before practice that this could be our last practice before the season’s over. We didn’t want to end it like that.”

The night belonged to Joiner and Williams, who combined for 58 points. Joiner, a junior guard, poured in a career-high 45 points while Williams added 12 rebounds and 12 assists for Oxford’s first triple-double all season.

“I came in here wanting to get my teammates involved,” Williams said. “Letting (Christopher Sandroni) shoot the ball, getting the ball to Jarkel and just rebounding. Doing everything I could to help us win.”

The pair benefited from the presence of senior forward D.K. Metcalf in the middle to fully exploit West Point’s 2-3 zone defense. Oxford’s guards either penetrated those gaps themselves or got the ball inside to Metcalf for a finish or a kickout.

Metcalf had 11 points for the Chargers while Sandroni and Cole Cromwell added 10 apiece. A.J. McFarland paced West Point with 16 points.

“Offensively I think they were worried about Metcalf coming from the corner around the block,” Oxford coach Drew Tyler said. “Therefore they’re having to worry about Metcalf, and that’s frees up our shooters from the perimeter.”

Oxford quickly took control, leading 43-23 at the half on Williams’ half-court buzzer beater, and extended its lead to as many as 24. Joiner scored 27 of his points after halftime and finished 14 of 22 from the floor and 7 of 11 from beyond the 3-point line.

“It starts in the morning,” Joiner said. “Pray to God and keep moving forward through the day. Get in my zone, lock in and go hoop.”

West Point (12-16) used full-court pressure to turn the Chargers over 17 times and trim the deficit to 82-73 with 2:30 remaining, but the Green Wave didn’t get any closer. With a win Friday, Oxford would earn a first-round bye in the playoffs.

“We look at it going in as we need a three-game home win streak,” Tyler said. “We’ve done one-third of that right so far. We’ve got two wins left at home, and we’re sitting in the Jackson Coliseum.”

Another win for OHS girls
Oxford’s girls carried their regular-season success over to the postseason with a 69-26 win over Saltillo in both teams’ Region 2-5A tournament opener.

Maggee Hobson led the top-seeded Chargers (23-4) with a game-high 27 points, scoring 20 of them in the first half as Oxford quickly jumped on the Tigers and coasted to its 15th straight win. Emma Schultz added nine points for the Chargers while Christina Owens chipped in seven.

“With her shooting like that, she really stretches the (defense) out,” Oxford coach Cliff Ormon said of Hobson. “There’s no doubt she’s playing very confidently right now. It’s good to have her playing this way, especially at this time of the season.”

Much of Oxford’s offense came from the pressure it generated with its full-court defense. The Chargers forced a barrage of turnovers, turning many of them into easy baskets, with Saltillo not making its first field goal until midway through the second quarter. A 26-1 advantage in the opening quarter set the tone for Oxford’s seventh victory over region opponents this season.

Oxford, which also won the region regular-season title, will play for the region tournament championship Friday at 6 p.m. against West Point.

“We kind of threw that record out yesterday when we started practicing and talked about 0-0 and starting it over again because these are the ones that you play for,” Ormon said. “All those are great, but now we’re at the games that you kind of want to finish off.”

ANOTHER LOSS: Slumping Rebels fall to No. 12 Texas…