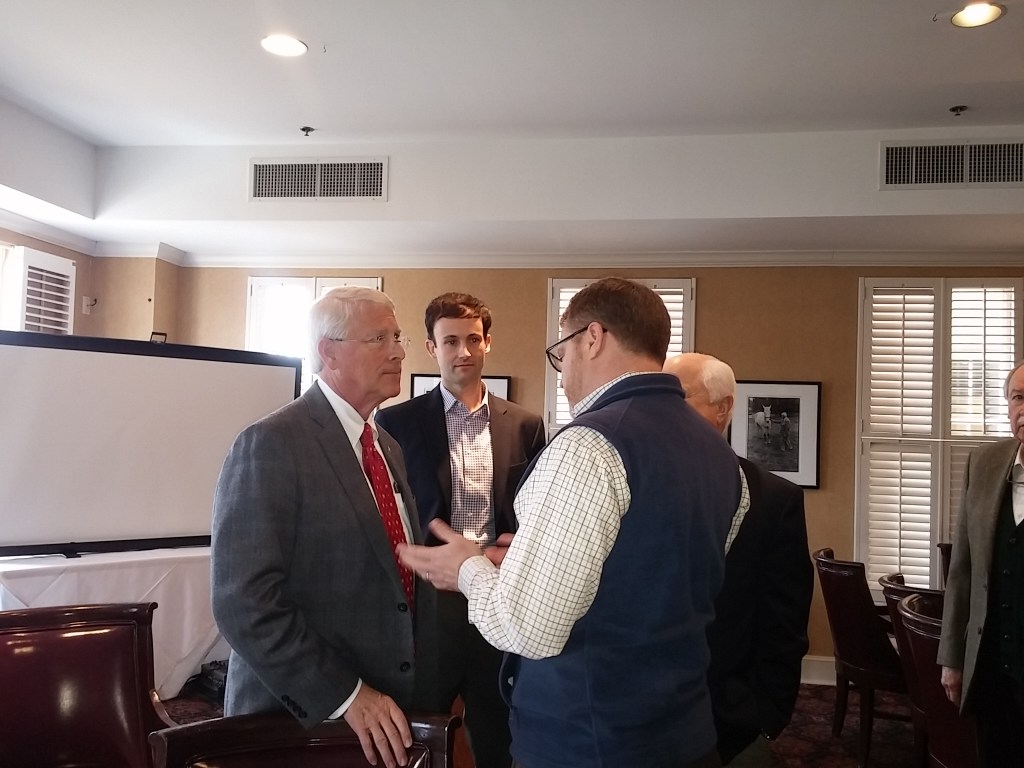 U.S Sen. Roger Wicker returned to the home of his alma mater Tuesday and broke bread with the Rotary Club of Oxford while giving members an update of what’s been going on inside the Senate.

“It’s always great to be back in Oxford,” he told the Rotarians during their regular meeting at the Oxford-University Club. “I’ve spoke to this club several times over the years, but I haven’t been here since 2012.”

While not a Rotarian himself, he proudly mentioned his father, Fred Wicker, was a longtime Rotarian in Pontotoc. He congratulated the club for its efforts in combating polio internationally.

“Thank you to the Rotary for all you’ve done in your dedication to eradicate polio,” he said. “We don’t worry about polio in the U.S. any longer and we’re close to eradicating polio internationally. We’re almost there.”

Wicker said he had come from meeting three students from the Croft Institute at Ole Miss who spoke to him seeking his support of Senate Bill 1911 aimed at ending preventable maternal, newborn and child deaths by 2035.

“It’s good to know we have students here working to have good health outcomes for children in this country as well,” he said.

Wicker retold the story of the “senatorial saucer,” when Thomas Jefferson asked George Washington why the Constitution included the Senate, which he thought was unnecessary.

“Why did you just now pour that coffee into your saucer before drinking?”

Jefferson replied it was to cool down the coffee.

Washington said that was why the Senate was established — to cool down legislation.

“I would submit to you, two to three years ago, Washington, if he could send us a message, would have told us we’ve slowed things down enough,” Wicker said with a chuckle. “But I would make the case that we have since turned things around in that regard. However, popular ideas do sometimes need to be rethought and discussed in a little more deliberate fashion.”

In 2014, the Senate only had 15 recorded votes on amendments.

“In 2015, we increased that 10 times over,” he said. “What did that get us? A bunch of recorded votes so you all know how we stand on things. But actually, the end result, if bringing the bills to the floor and voting on the amendments, has resulted in a lot of accomplishments.”

Some of those accomplishments include passing the Trade Promotion Authority bill, granting the president of the United States enhanced power to negotiate major trade agreements with Asia and Europe; passing a highway and transportation bill to allow for the construction of more U.S. Highways; passing an amended education bill that lessens the power of the federal government in education and granting more power to the states; passing a human trafficking bill that cracks down on the growing problem.

“Human trafficking is a massive problem right now and it happens in all 50 states,” he said. “We’re going to come down hard on offenders.”

During the question and answer portion of Wicker’s visit, he was asked his opinion on the appointment of a justice to replace Justice Antonin Scalia, who died Saturday. President Barack Obama said he is moving forward with appointing a replacement for Scalia, but that move is being fought by the GOP.

“We’re not going to be able to confirm a Supreme Court nominee during this presidency,” Wicker said. “The decision mostly likely will be made by the next president.”