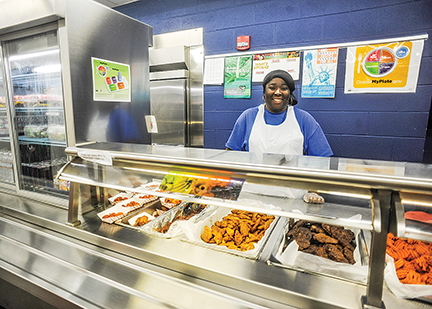 Oxford Middle School’s lunch is now spiced up with different lines and various food groups to please even the pickiest eaters.

“We just started the food court on Monday, so it’s basically four different lines and they can choose what they want versus us telling them what they are going to have,” she said.

The four lines include a home-cooked line, a potato and soup line, a salad bar and an a la carte line.

The home-cooking line will have a different cuisine each day, whether it is Mexican, Asian, Italian, Southern or more.

“The a la carte line is anything from pizza to hot dogs, chicken sandwiches, French fries and kid-friendly foods,” Irby said.

Irby said the goal is to get more students eating healthy at lunch. Usually the school feeds around 300 students a day and teachers. With the new food options Irby has already noticed more people in the lines.

“We hope to increase participation,” she said. “We know there are kids who just like hamburgers and that’s the way they are, but we want to give kids more options to eat lunch with us.”

She said if the meal comes from school, parents can rest assured it is nutritious due to state guidelines cooks have to meet, which includes using spices that are not loaded with sodium or extra chemicals.

“Instead of getting a soy burger, they’re hand-pounding every burger, and it’s a more fresh product coming out,” she said. “We now have a flat-top grill that we didn’t have before. All of our dressings are being made from scratch. We have a new chicken salad recipe on the salad bar. We’re bringing in sweet potatoes instead of a baked potato. We have a new comeback sauce,” and more in the lines.

Irby and two other school leaders visited a school in Alabama that had a food court concept before bringing it to OMS and made sure the students had a say.

“We involved the kids in this,” she said. “We had them do surveys and we let them be involved in making signs. They were involved.”