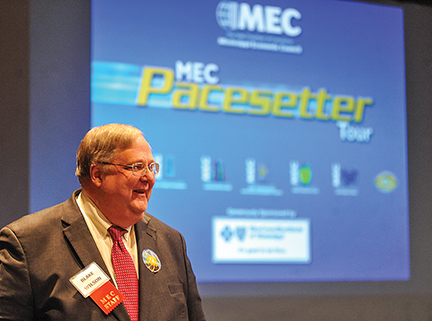 Sick of getting cracks in your windshield, flat tires from crumbling streets and needing a front-end alignment after hitting a massive pothole?

The MEC brought its Pacesetter Tour to Oxford Wednesday with its Blueprint Mississippi message and polled those in attendance to gather their input on the state’s education system, transportation infrastructure, economic competitiveness and its workforce.

“Blueprint Mississippi is a long-range economic plan that we first implemented in 2004 to keep us focused on accomplishing things that are going to make our state more competitive,” MEC President and CEO Blake Wilson said on the tour’s 20th stop.

The Blueprint plan has put out a proposal, “Excelerate Mississippi,” to bring $375 million to the budget for state roadways. That plan will be brought before the legislature next week.

The event featured state leaders on video giving their take on the economy and needs for the state, whether it goes back to education, health or allocations from the legislature. Those shown include Gov. Phil Bryant, Lt. Gov. Tate Reeves, House Speaker Philip Gunn and the CEO of Mississippi’s only Fortune 1000 company, Sanderson Farms.

“In 1987, business leaders throughout Mississippi worked with the legislature to build one of the best four-lane highway systems in America,” said CEO Joe Sanderson. “We gained an edge in economic development, but today as I drive across our state I see firsthand we are on the verge of losing our edge and the massive investment that was made in our state transportation system could be lost.”

Wilson said Sanderson’s company relies on good roads and a clear path throughout the state, as do existing and future industry, and that’s why the upcoming proposal is so critical.

“What does all this cost? About 37 cents a day,” Wilson said. “If you divide that 375 figure by the number of registered vehicles in Mississippi that works out to about the cost of a senior cup of coffee. That’s not any specific way of funding that. We’ve provided the legislature with a choice, a lot of options. But it brings us $1.45 a day in returns.”

Wilson said Alabama, Tennessee and Arkansas are among about two dozen states working on their roadways, and they could get industry instead of Mississippi unless roads are taken care of.

“We have this fantastic system, but we’re not maintaining it. There are hundreds and hundreds of bridges that are posted,” he said. “If we don’t do it, where we moved ahead in 1987, we are going to fall further behind.”

Wilson said when dealing with a large statewide issue like this, it is best to come up with a plan that has options and present it as a unified front to the state’s lawmakers. That will happen at 9 a.m. Wednesday in a joint meeting of the Senate and House transportation committees.

“We did not recommend any one course,” he said. “We followed the North Carolina and Georgia models where those organizations have run statewide campaigns and really left it for the legislature. They may have some other options that we may need to think about doing and that process of discussion really begins next week.”

Appropriations begin toward the end of the session while bills are examined at the beginning. Lawmakers have until April 1 to examine a bill.

Part of why they could be listening is the MEC feels the request is reasonable.

“We need $375 million more a year in order to catch up,” Wilson said. “This does not fully fund transportation. We’d have to be raising over 10 years, instead of $375 million, we’d have to raise $6 billion. It enables us to catch up and to deal with every posted state bridge and for the counties to be able to deal with their posted county bridges.”

Wilson said county supervisors statewide have expressed frustrations with the plan because they say they need a larger portion of the funds.

“They’ve got a big need — we don’t discount that,” he said. “But our survey showed that because 90 percent of commercial traffic and 60 percent of overall traffic is on state routes that bring the opportunity to counties, we felt that split was appropriate. Because that’s actually 25 percent more for state roads but it doubles the amount for county and city roads.”

Wilson said the important thing now is for residents, county and city leaders to be united with this plan so that the legislature knows it’s wanted, and counties that need more will not be forgotten.

“It’s not like we’re ignoring it but we have to come up with a recommendation to start with,” he said. “So what we’ve done is we’ve talked with the supervisors and said don’t oppose this whole thing. You were a part of the process, so support the process. But we’ll put a note on our list of supporting organizations that you would like more money. That’s what the legislative process is about.

“The point is everybody is supporting the same overall goal. Now we just have to work out how to best deploy those resources, and that is what the conversation will be with the legislature.”

WHERE ARE THE PROBLEM ROADS?

For a full report on damaged roads and bridges, visit exceleratems.com.

City: Get rid of junk in carports