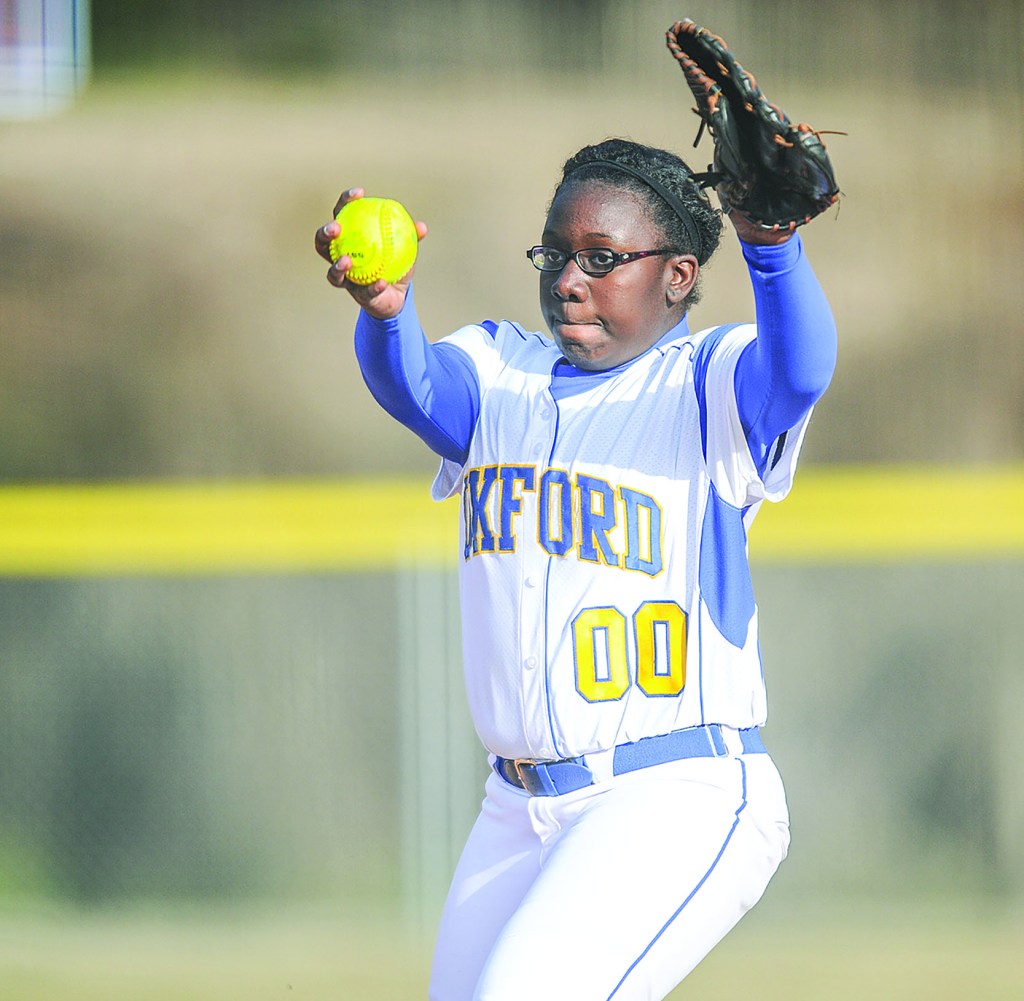 Amber Pettis (00) returns to give Oxford an arm in the circle as the Chargers look to solidify their pitching.

Last year, Oxford softball coach Steve Blackmon had to deal with the sudden departure of his ace pitcher during the holiday break before the season began. It was a blow to his pitching staff that was tough to overcome.

This year, it will be more of the same as he is dealing with the loss of Chloe Russell, who transferred to crosstown rival Lafayette.

“For the second straight year, we lost an important returning pitcher and it just means we’re going to be really young in the circle,” Blackmon said. “We have two sophomores and a freshman. … They may all see some varsity time. We’re going to be real young here. We just want to throw strikes and make them swing the bat.”

The most experienced will be sophomore Madison Crosby, who was the No. 2 pitcher last season. Crosby, who Blackmon noted steadily improved as the season progressed, will be joined by fellow sophomore Amber Pettis.

Pettis has mainly been a first baseman and outfielder for the Chargers but has been training in the offseason as well as taking pitching lessons to try and better herself for the season. If Pettis improves enough to become Oxford’s new ace, then Blackmon would like to move Crosby, who is an outfielder on non-pitching days, to shortstop.

The youngest and least experienced of the trio is freshman Gracie Beardain, who will mostly be used as a junior varsity pitcher this season.

Moving parts
Pitching is not the only concern for Blackmon when it comes to defense in the infield. The entire infield will be new.

Junior D.D. Mathis has been a staple at first base, but Blackmon would like to be able to move her to the outfield if there is someone who he finds can provide stability at first. A newcomer in Elisha Webb will be at second base with Crosby at short.

In the outfield along with Mathis will be junior Katelyn Pegues, who has been the starting center fielder for the past two seasons. Mathis will handle left-field duties, and there could be a couple players, including Pettis and sophomore Hailey Everett, who take over right field until Blackmon can find the right fit.

Returning offense
Three of the top four batters in last year’s lineup will be coming back this season. Pegues will continue to lead off for the Chargers. Mathis and Crosby had been anywhere between the No. 3 and 5 spots in the lineup and will look to continue that trend.

“We got all three of those back. So that, you got to feel good about there,” Blackmon said. “It’s a funny game. Some days, we’ll just rip the cover off the ball. We’ve got some potential to hit it pretty decently. If we can get them all turned on on the same days, we’d be all right.”

Oxford will scrimmage Senatobia at Senatobia on Saturday then begin its season Feb. 27 when it hosts the Charger Classic with games against South Pontotoc and Olive Branch.

SIGNATURE MARK: Bianco touts Rebels as one of ‘most…