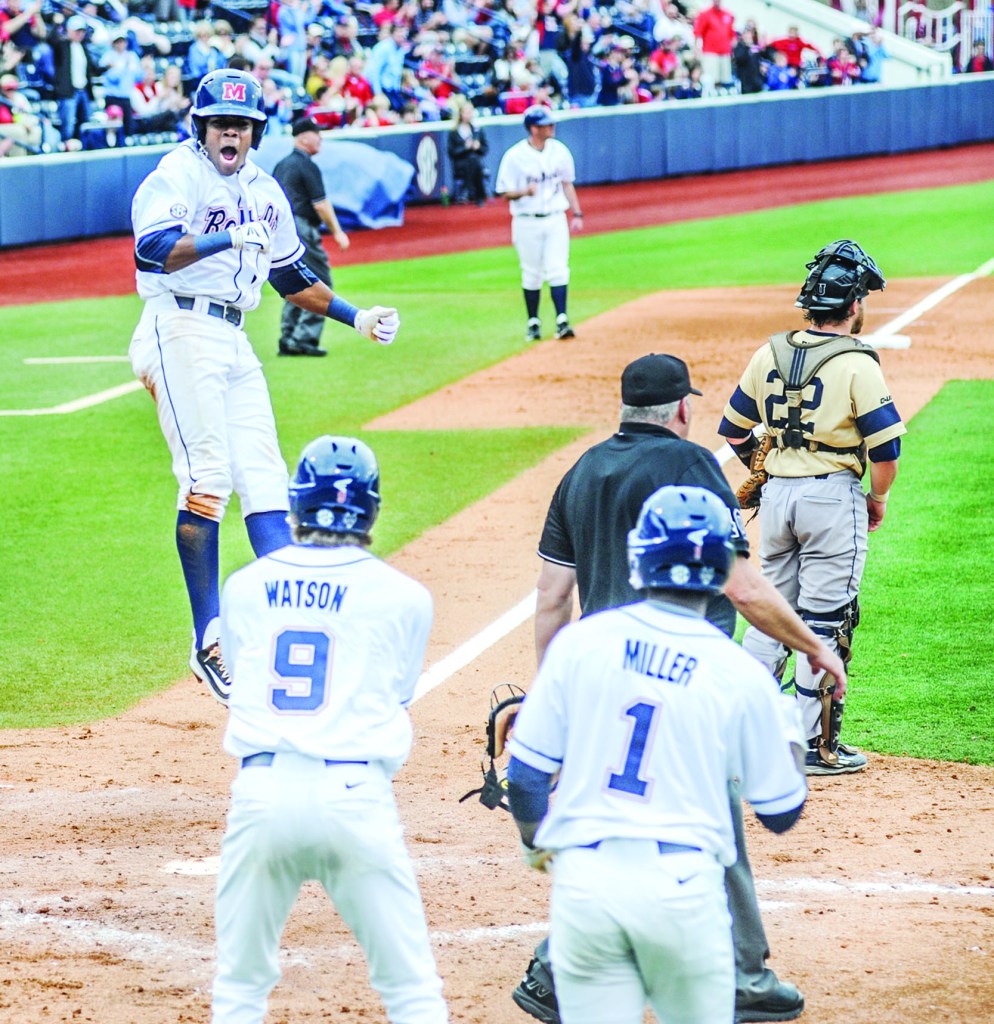 Ole Miss’ Errol Robinson (6) reacts as he scores along with teammates Kyle Watson (9) and D.J. Miller (1) against FIU at Oxford-University Stadium on Saturday. The Rebels took the series with a 7-4 win after winning 9-2 on Friday.

The offense came in spurts Saturday afternoon but at opportune times as the Ole Miss baseball team defeated Florida International 7-4 to take the opening series at Oxford-University Stadium.

A three-run first inning paired with a four-run sixth inning was the difference for Ole Miss (2-0) on a day where starting pitcher Chad Smith was shaky in his Rebel debut.

“Chad struggled, and it just looked like nerves and he just wasn’t himself,” Ole Miss coach Mike Bianco said. “Just really had no command and struggled out there. It seemed like if he didn’t walk them, he was behind in the count trying to just find something he could throw in the strike zone and (Florida International) got some hits.”

After a clean first inning, Smith was shaky from there, walking three batters in the second inning. Smith erased Ole Miss’ early lead, giving up three earned runs in 3.2 innings of work. Smith’s day was done early with freshman right-hander Andy Pagnozzi coming in for relief and earning his first career win.

Pagnozzi was a reliable stop valve, pitching 2.1 innings of scoreless relief and giving up only one hit and striking out a batter.

“I’ve been working all year for this,” Pagnozzi said. “I felt my team behind me, and I was just ready to go out there and hit spots. … It was a little nerve-wracking heading out there for your first time, but every time it was just like every intersquad (scrimmage) we played.”

Freshman James McArthur pitched one inning, and closer Wyatt Short earned the save with two scoreless innings of work.

Timely hit
The Rebels only managed six hits, but first baseman Will Golsan came up with the biggest in the sixth inning. With the bases loaded, Golsan hit a three-RBI double, breaking the game open and giving Ole Miss the winning margin.

“They were pitching me in a little bit. So I just tried to back up off the plate a little bit and get a fastball to hit and that’s what I got,” Golsan said. “Finally got in the swing of things and just trying to put the barrel on the ball.”

Florida International (0-2) had its chances to take over the game, but the Rebel defense shined Saturday afternoon. Left fielder Cameron Dishon made a diving catch at the warning track to prevent at least a double midway through the game. Right fielder J.B. Woodman caught a pop fly and then gunned down an FIU runner attempting to score from home to keep it a 7-4 game in the eighth inning.

The Rebels will go for the sweep today at noon.

Friday
In his first outing as the ace of the pitching staff, Brady Bramlett led the Rebels to their 15th opening-day win under Bianco.

Bramlett used six strikeouts to keep the Florida International bats off balance, and the offense opened things up early for a 9-2 win. The right-handed junior went five innings, gave up one hit and issued a walk.