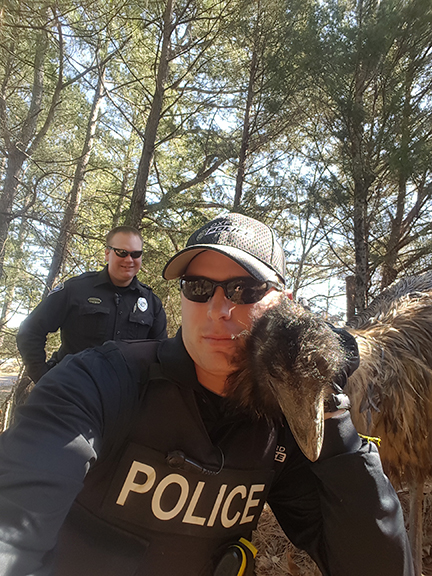 Oxford Police Department Officer Cody Pruitt and a group of his fellow Oxford Police officers successfully apprehended the wandering emu on Friday and place it in a more safe environment.

Oxford police officer Cody Pruitt ran through trees and brush to apprehend his target. He wasn’t giving up and neither were the fellow officers with him.

The emu was going to be captured — for his own good.

Over the last few days, the Lafayette County Sheriff’s Department had received a few calls about a loose emu running through county streets and yards. Apparently, its owners had a death in the family and a house fire, causing them all to move out.

“No one seemed to want it,” said Lafayette County Deputy Chief Scott Mills.

Mills said they would get a call and try to capture the emu but it managed to slip away. The emu’s original home was around Old Sardis.

The emu had been a pet, but one living in captivity so when it had a chance to roam, it roamed, and kept roaming right now to Hillside Drive near the Woodlawn subdivision.

“We got a call there was a big bird going through people’s yards,” said Pruitt who works as a housing officer for OPD. “Me and several officers started making loops trying to find it.”

The emu left the wooded area and crossed Highway 6 near the West Jackson Avenue intersection.

“He made it across safely,” Pruitt said. “The cars would stop for him to let him get on over.”

Once back in the woods the pursuit started again.

“Me and Lt. (Bobby) Kelly circled back around and we found it,” he said. “It had gotten into some barbed wire.”

Being tame, the emu didn’t make much fuss when the officers approached it, allowing Pruitt to pet the emu to comfort it. Other than a scratch on the neck from the wire, the emu was unharmed.

Officer Ryan Baker found some rope and made a leash. Mounted Patrol Commander David Misenhelter brought the horse trailer and walked the emu inside.

But where to bring the big bird was another challenge.

“I called the Sheriff’s Office and asked if they had contact information for another farm out there on Highway 7 South that I knew had some emus,” Pruitt said. “So we called them and asked the owners if they could take one more emu and they said they would take it in.”

The police drove the emu to the farm and set him over the fence where he immediately seemed to make friends with the emus already there.

“They seemed to get along just fine,” Pruitt said.