TWO FOR ONE: Chargers sweep 2-5A tourney championships 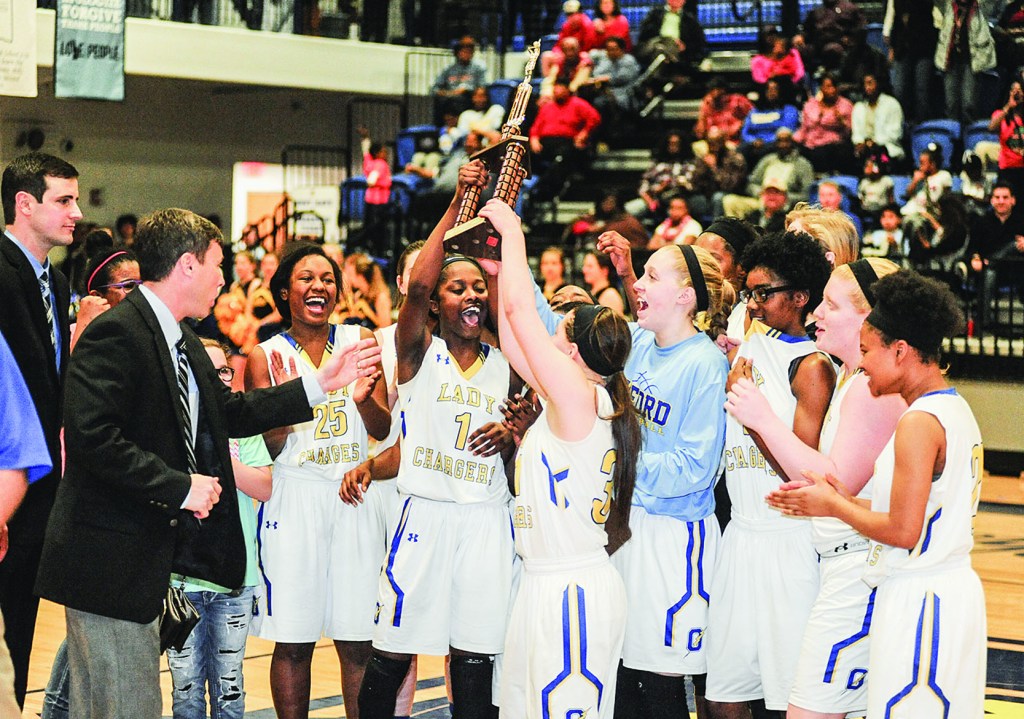 Members of Oxford’s girls team hold up the championship trophy after defeating West Point 72-67 in the Region 2-5A tournament championship game Friday at the OHS gym. The Chargers won their 16th straight game to earn a first-round bye in the MHSAA Class 5A playoffs.

The first half could not have gone any better for coach Cliff Ormon and the Oxford High girls basketball team against West Point.

The second half was a totally different story.

Oxford withstood a third-quarter rally to defeat the Green Wave 72-67, claiming the Region 2-5A tournament championship at the OHS gym Friday night. The win also secured the Chargers a first-round bye in the MHSAA Class 5A playoffs, which begin this week.

Oxford, which has won 16 straight games, will host the winner of Monday’s opening-round game between Vicksburg and Germantown on Friday.

The Chargers (24-4) were dominant in the first 16 minutes of action, creating turnovers and cashing in on the offensive end. West Point turned the ball over 11 times in the first half. Oxford cruised out to a 40-19 halftime lead and looked primed to march into the second round with minimal resistance from the Green Wave.

Then the second half started.

“It couldn’t have been any more scripted than the way we wanted,” Ormon said. “Getting into the half with pretty good foul trouble. We’d scored and kind of done the game plan that we wanted. The game changed in the second half. We talked about it at the half, and we knew there would be a run.”

Indeed there was a run, a monster run at that.

West Point outscored the Chargers 25-11 in the third quarter, erasing Oxford’s 21-point halftime lead and cutting it to a 51-44 lead heading into the final quarter.

The Green Wave’s Qiayon Bailey was a thorn in Oxford’s side all night with her size down low and her ability to hit a long-range shot. Bailey finished with a team-high 23 points and hit three 3-pointers.

“She’s a great player,” Ormon said of Bailey. “We tried to run some different stuff at her, and at the end of the game, she continued to make plays like a great player does. I can’t credit (West Point) enough. That’s a good team, and they put it all on the line.”

The good foul trouble turned into bad foul trouble quickly with many of Oxford’s starters finding themselves with three or four fouls during the third quarter. That led to players who have been spending time on the bench the majority of the season coming in and spending big minutes on the court.

Freshman Kelsey Wilborn played most of the fourth quarter and only scored four points, but they were four important points for Oxford.

“We got into some depth issues, and that was a credit to those girls who sit there all year going through practice wondering when it’s going to be their time,” Ormon said. “Some of them didn’t know it was going to be the playoffs. Kelsey stepped up and hit two big layups there under pressure.”

Back-to-back champs
The Oxford boys won the Region 2-5A tournament on the road last year at West Point. This season, the Chargers were able to do the same thing in their own gym.

The Chargers mounted a second-half comeback to defeat Saltillo 63-57, defending their tournament championship.

“I think it was advantageous hosting, protecting our home turf,” Oxford coach Drew Tyler said after the win. “Postgame, I’m going to sure mention to my team the state tournament is on the road. But we got one more game to protect our home turf.”

Oxford (19-9) had to make do early on without its key player at full capacity. Junior guard Jarkel Joiner looked to have heavy legs to Tyler and was not much of a factor early on, being held scoreless in the first quarter.

Senior D.K. Metcalf and junior Terry Williams kept the ship steady, providing most of the offense on a night when only four Chargers scored, to give Oxford a 29-28 lead at halftime.

“Terry Williams does a really good job of being our quarterback on the court, our floor general,” Tyler said. “As Jarkel kind of found his groove, we kind of went in and out of the 2-3 zone and the man-to-man, but Metcalf did a lot for us as far as value as a defensive rebounder.”

Joiner finally found his rhythm, scoring a team-high 27 points while Metcalf and Williams added 16 and 12 points, respectively. Oxford used a 10-0 run to close out the third quarter when trailing 39-35 to pull ahead for good, sparking a 28-18 run to end the game.

The Chargers advanced to the second round of the MHSAA Class 5A playoffs Saturday at 7 p.m. They await the winner of Canton and Lanier.