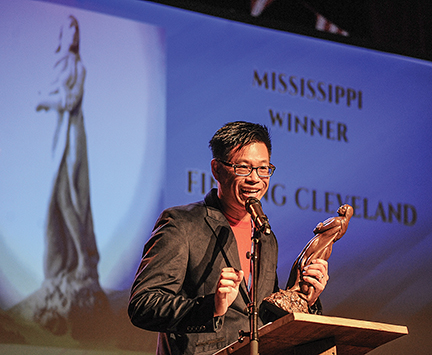 Baldwin Chiu speaks after receiving a Spirit of the Hoka award for his film "Finding Cleveland", at the Oxford Film Festival awards show at the Lyric in Oxford, Miss. on Saturday, February 20, 2016.

“Ticket sales were an increase of 35 percent this year even though we had more free programs that were well attended,” she said this morning.

This was Addington’s first year as the event’s executive director; however,

she’s been involved with the event for more than 11 years. The festival was run solely with volunteers when the Board of Directors decided last year to hire a full-time executive director.

“It was different than in previous years for me because I had such a strong team of people making the festival a success that I was able to just focus on visiting with all of our special guests,” she said. “Overall, I felt this was a good way to start off the festival as executive director, and I hope to learn from feed- back from our guests on things we can improve. We will have a survey going out to all attendees. I look forward to further innovations that we simply did not have the time to add to this year’s festival.”

Addington received a standing ova- tion Saturday night at the awards cere- mony held at The Lyric Oxford when Blake Tartt, one of the event’s major sponsors, introduced her.

“This girl has worked morning, noon and night to make this festival the out- standing event that it is,” he said.

Addington said the more than 300 volunteers were the real heroes of the festival.

Hoka Awards, named after the Native American Princes Hoka, were given out to movies in more than nine categories and for several special awards, including an Audience Award for “West of Elvis,” that was directed by Louis Bourgeois and filmed by Daniel Lee Perea. The film was entered into an online audience-voting contest in 2015 against other past OFF films. The film originally played in 2014 and is a short documentary capturing the spirit of Paul MacLeod, the owner of Graceland Too.

“I have seen many of (Blanché’s) films, and I am very proud, and this makes winning this more special to me,” she said.

Along with the Hoka, Carré received a $20,000 camera rental package Panavision, eight hours of post color correction from John Davidson Color and an InkTip Script listing, along with a $1,000 cash prize.

The Hoka Awards in the Mississippi Films Category were presented to Gabriel Robertson’s “The Gift,” for Best Narrative Film. The award includes a cash prize through the Casey Spradling Memorial Endowment. The young star of the film, Brady Permenter, accepted the award on behalf of Robertson.

“It’s really for the crew,” he said, giving the film crew the credit for the award. “I just stand in front of the camera.”

The Hoka Award for Best Documentary Film in the Mississippi category went to Larissa Lam’s “Finding Cleveland.” Both winners gain membership in the OxFilm Society and get free equipment rentals for one year.

There were more than 144 films shown during the five-day event.

“This was a major year of growth for the Oxford Film Festival and the increased number of films we accepted and presented this year was only matched by the artistic quality and creative achievement of those films,” Addington said. “Our film juries were faced with a number of difficult decisions choosing the Hoka Award winners over the other films in each of the categories, thus quite a few films received special mentions as well.”

Other highlights included a dedicated presentation of virtual reality projects at the Powerhouse, as well as filmmaker panels dedicated to minority casting, diversity in filmmaking and Mississippi filmmaking, among other subjects.