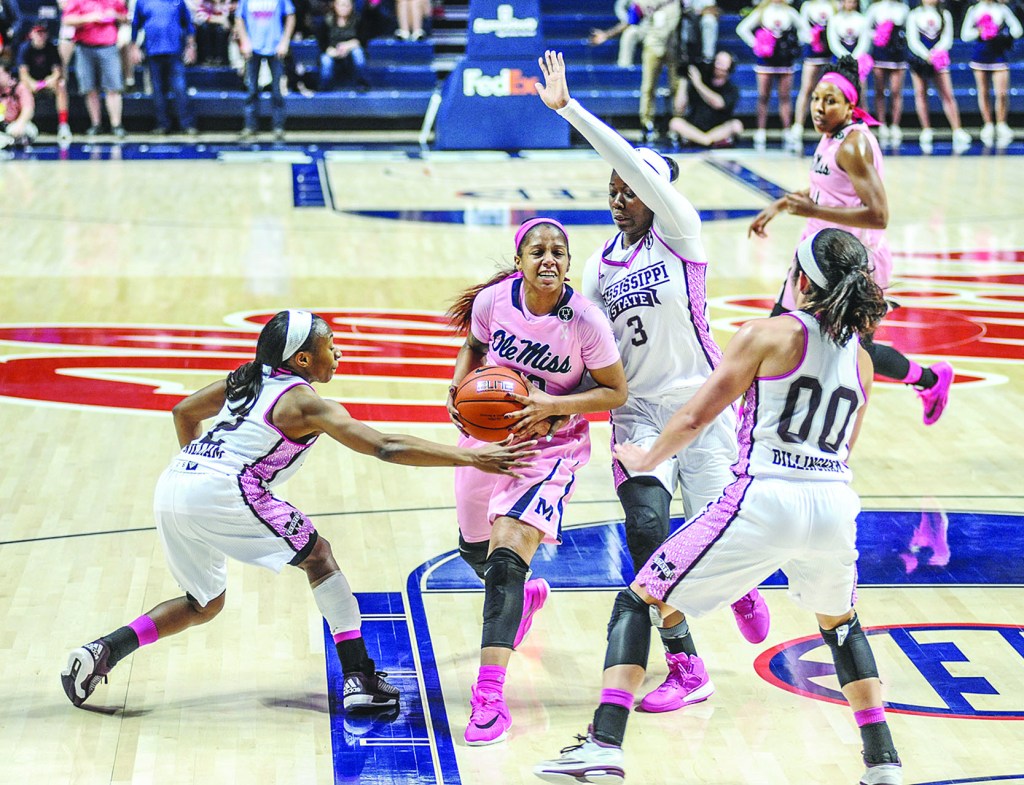 With two more games left at home inside the Pavilion, Ole Miss women’s basketball coach Matt Insell had the next to last one circled on his calendar.

Regardless of how the season has gone to this point, his team was going to be ready for its in-state rival, No. 14 Mississippi State.

The Bulldogs were too much though as they defeated Ole Miss 60-51 Sunday evening, sweeping the season series and beating the Rebels for the fifth straight time. The loss was the Rebels’ eighth straight and 12th in the last 13 games.

“A real hard-fought game, and my hat’s off to Mississippi State,” Insell said. “I was proud of how our girls fought, but we didn’t win the game. … We’re just not making any shots. It’s just the story of who we are right now.”

Ole Miss (10-17, 2-12 Southeastern Conference) jumped out to a quick start, taking a 7-4 lead midway through the first quarter. Then Mississippi State turned it on.

The Bulldogs closed the opening period with a 15-2 run to grab a 19-9 lead for the remainder of the game.

“We came out attacking early and then we got real passive,” Insell said of the first quarter.

There were chances for the Rebels to get back in the game and cut the Mississippi State lead down or even take the lead, but Ole Miss could get no closer than five points the rest of the way.

Mississippi State was led by sophomore guard Victoria Vivians, who scored a game-high 22 points and had a game-high 10 rebounds. Vivians’ biggest shots came with 8:38 remaining in the game after Ole Miss’ Erika Sisk and Medinah Muhammad hit back-to-back shots to cut the lead to 45-40.

The Bulldogs called a timeout then Vivians hit a jump shot followed by a bank-shot 3-pointer the following possession to extend the lead back to 10 points.

“Every time they needed a bucket, (Vivians) stepped up,” Insell said. “We were there on all three of the tough shots. Every time we cut it to five, she made a shot. That’s what great players do.”

Another thorn in the Rebels’ side was Mississippi State’s 6-foot-7 forward Teaira McCowan. McCowan had three blocks and was a force in the paint defensively. She also hit two layups after being fouled and completed the and-1 attempts late in the game.

“There’s not many people that can get around (McCowan) or attack her,” Insell said. “She’s a specimen of a kid. The big thing was to try and get her off the block.”

Ole Miss was led by Muhammad’s 14 points, the only Rebel to score in double digits. Shequila Joseph put up nine points while Sisk added seven. A’Queen Hayes had six points and a team-high seven rebounds.

The Rebels return to action Thursday as they host No. 2 South Carolina in their home finale at 8 p.m. on the SEC Network.