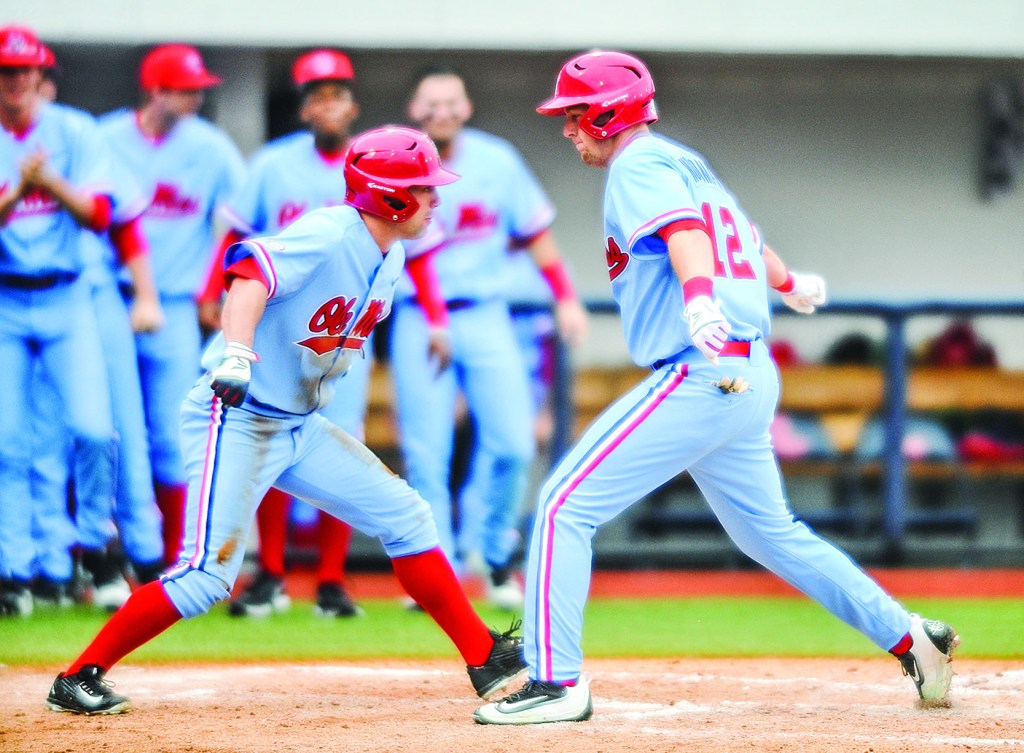 Ole Miss’ J.B. Woodman (12) hits a three-run home run and is congratulated at the plate by Cameron Dishon (14) against Florida International at Oxford-University Stadium on Sunday. The Rebels finished off the sweep with a 16-5 win.

It was another offensive explosion by Ole Miss paired with poor pitching from Florida International, which led to a 16-5 Rebel win at Oxford-University Stadium Sunday afternoon.

The win completed an opening-weekend sweep for Ole Miss (3-0).

A nine-run first inning, which was capped by a three-run home run by J.B. Woodman, all but sealed the win for the Rebels. The inning included three walks and a hit batter by the Panthers’ pitching. Florida International (0-3) starter Garrett Cave lasted 0.1 innings before getting the hook in favor of Michael Hagis out of the bullpen.

The big inning followed what was a shaky start by Ole Miss starter Sean Johnson. The right-hander was making his return after Tommy John surgery last March and took an inning to get settled in. The junior gave up two runs and threw two wild pitches and a passed ball. He also slipped when handling a bunt.

After that, he went five innings, giving up four runs — two of them earned — and recording five strikeouts.

“It wasn’t exactly what I wanted,” Johnson said of his performance. “Command wasn’t exactly there, but it was good to go out there and get the experience and the win most importantly. My arm felt good, it’s wasn’t an arm issue. It might have just been some jitters. … I got the jitters out now. So I can come out and throw well against Louisville.”

Bianco got work out of his bullpen with freshmen Brady Feigl and Connor Green and junior Brian Browning working an inning each. Will Stokes came in to close things out in the ninth.

Ole Miss used 12 hits and eight walks to help generate the offense Sunday. Tate Blackman continued his hot start, going 2-for-2 with two RBIs. Will Golsan once again excelled at the plate with the bases loaded with a two-RBI single. Woodman finished the day going 2-for-3 with the three RBIs.

The Rebels scored 32 runs in the series, which is the most in an opening weekend series since scoring that exact number of runs against Louisiana-Monroe to begin the 2010 season. All starters recorded a hit on Sunday.

“A lot of confident guys, a lot of older guys in the lineup,” Ole Miss coach Mike Bianco said. “They’re feeling good at the plate.”

Robinson out
Due to an infection in one of his fingers, junior shortstop Errol Robinson was scratched from the lineup a couple hours before game time. It ended a streak of 94 straight starts for Robinson, which dates back to April 9, 2014, against Murray State.

Freshman Ryan Olenek filled in for Robinson and had a solid debut. He went 1-for-5 with four RBIs.

“(Olenek) made some tough plays today,” Bianco said. “He’s ready to play now. He’s a guy who we’ll have no reservations about throwing him anywhere and he can play anywhere. You can probably run him out in the outfield and probably see him pitch before it’s all said and done.”

Ole Miss continues its opening homestand on Tuesday against Arkansas State at 4 p.m.

TWO FOR ONE: Chargers sweep 2-5A tourney championships