Oxford man makes name for self in Special Olympics 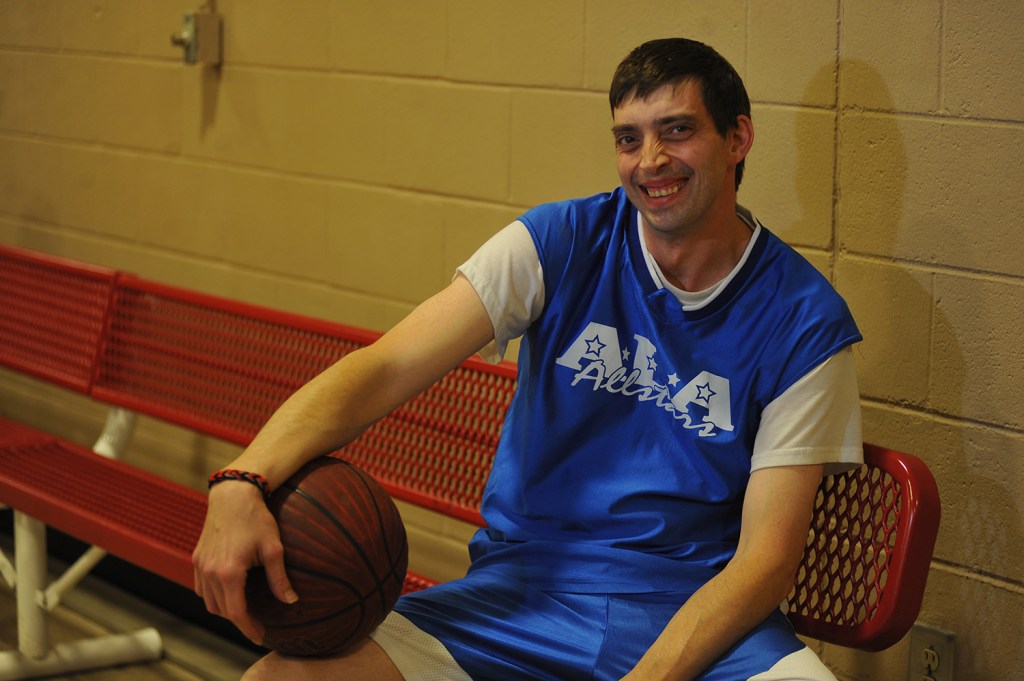 Bill Holden plays basketball at North Mississippi Regional Center. The Oxford resident is a high-functioning player who says basketball is his life.

A uniform, a pair of sneakers and a basketball.

Yet it’s evident Bill Holden is ready to play even without glancing at his attire.

His eyes widen. His tone hardens. Simply bringing up one of his ultimate passions in conversation is enough for him to get serious.

“Basketball is my life,” Holden said.

It’s one of the many sports that consumes Holden, who’s one of the premier athletes heavily involved in Special Olympics in the area and is a member of the ALA All-Stars, a basketball team comprised of local athletes through the North Mississippi Regional Center’s Alternative Living Arrangement program.

Holden resides in one of the program’s group homes in Oxford under the supervision of live-in house parents along with other people with intellectual and developmental disabilities. Citing health information privacy laws, the program will not reveal Holden’s specific condition.

But Holden, 43, is a high-functioning player who’s using his abilities to make a name for himself on the field and courts he plays on.

“We have many, many exceptional players, and Bill is one of the best we have,” said Cindy Holley, an assistant coordinator for ALA who coaches Holden’s basketball team.

Holden has been playing basketball in the ALA program since he moved to Oxford in 2011, but he’s been involved in Special Olympics since 1998. He also plays volleyball and runs track. He got involved with flag football in 2014, and this past summer was his first to play softball.

“(Special Olympics) means a whole lot to me because for such a long time, I never really got to experience like flag football, softball, basketball,” Holden said. “It was a little bit different at first, but now since I’ve been here, I’ve really enjoyed being here.”

He’s excelled in all of them.

Players earn the right to compete at the state and national levels based on how they perform in their area. Holden competed in the state softball and track and field games at the Keesler Air Force Base in Biloxi last summer and recently capped his first season in softball by helping Mississippi finish runner-up in a national unified tournament in Wichita, Kansas, as one of the state’s three players from Area 4, which includes Lafayette, Tallahatchie, Calhoun, Grenada, Panola and Yalobusha counties.

“I never thought to put him on the softball team let alone for him to make it all the way to nationals, but they all will really surprise you in what they actually can do,” said Felisa Bonner, Mississippi’s Area 4 director for Special Olympics. “All you have to do is a little coaching and training, and once they get focused on it, they will really surprise you in what they can do.”

Holden has also played in back-to-back unified Egg Bowls and has been on both sides of the rivalry. The north and south halves of the state divide into teams to play the flag football game started by Special Olympics last fall, but Holden volunteered to play for Mississippi State in the inaugural game when the team was short a player.

This fall, Holden played for Ole Miss and was part of the winning side, which he said produced one of his favorite moments in Special Olympics. After the one-point win, the head coach of the Rebels’ actual team, Hugh Freeze, along with players Laremy Tunsil, Evan Engram and Justin Bell joined Holden and his teammates on the field to present them with the trophy and medals.

“My mouth is just like falling down to the floor,” Holden said. “I’m like, ‘Huh?’ I was just shocked when they came out there to the field.”

But Holden’s first love has always been basketball, a sport he played the most growing up in Hernando with a basketball goal outside his home that he practiced on “practically every day when I was 15 or 14 years old,” he said.

Holden attended the Eudora Learning Center until 1991 before moving into his first group home in Senatobia, a 10-bed sister facility. Holden eventually moved to Bruce, where he lived in two different homes, before relocating to Oxford five years ago.

His favorite sport came along with him thanks to Holley, who created the ALA All-Stars in 1996 to accommodate the growing demand for a basketball team in the area with group homes expanding. Holden jumped at the chance to join the team upon his arrival, and it’s been hard to slow him down since.

“He’s a team player, but he’s very competitive,” Bonner said. “He wants to be in there the whole game nonstop, and he can do it. Sometimes you have to say, ‘Hey, Bill, take a break and let somebody else play.’”

But Holden never wants to stay out long, and the team can’t afford that either. The All-Stars started practicing twice a week in January for this season, which started with a tournament at Ole Miss earlier this month and includes the Oxford Park Commission’s Challenger League and the annual NMRC two-day invitational tournament.

“He’s really, really good,” Holley said of Holden. “He can handle the ball really well. He shoots really good. And he’s a good team player. He doesn’t mind throwing the ball to somebody else now.”

All of those events will get the All-Stars ready for the state tournament in Madison in April, a tournament Holden said he’s itching to play in again after the team finished third last season. The competitor in Holden comes out when he talks about his desire to be No. 1.

“I want the gold bad enough that I can taste it,” Holden said. “Silver and bronze is OK, but gold is the top number one of all sports. If it’s football, baseball or basketball, gold to me is the number one top thing, and I want to win the gold this year.”

But more than anything, Holden wants to stay involved with Special Olympics as long as he can.

He has a job working at Home Depot five days a week that he said he would “trade nothing for,” and he could see himself getting his own place at some point. But he’s perfectly content with where he’s at, doing what he loves to make himself and those he’s closest to proud.

“When I feel like I know I’m doing something special, it makes me feel good deep down inside to know that I can do something and I can feel good about it,” Holden said. “I can get on the phone and I can call my mom and say, ‘Mom, I won this. Mom, I’ve won that.’

“Sports to me is like, it’s like a future, something that I want to do. It’s like something I want to do for the rest of my life.”