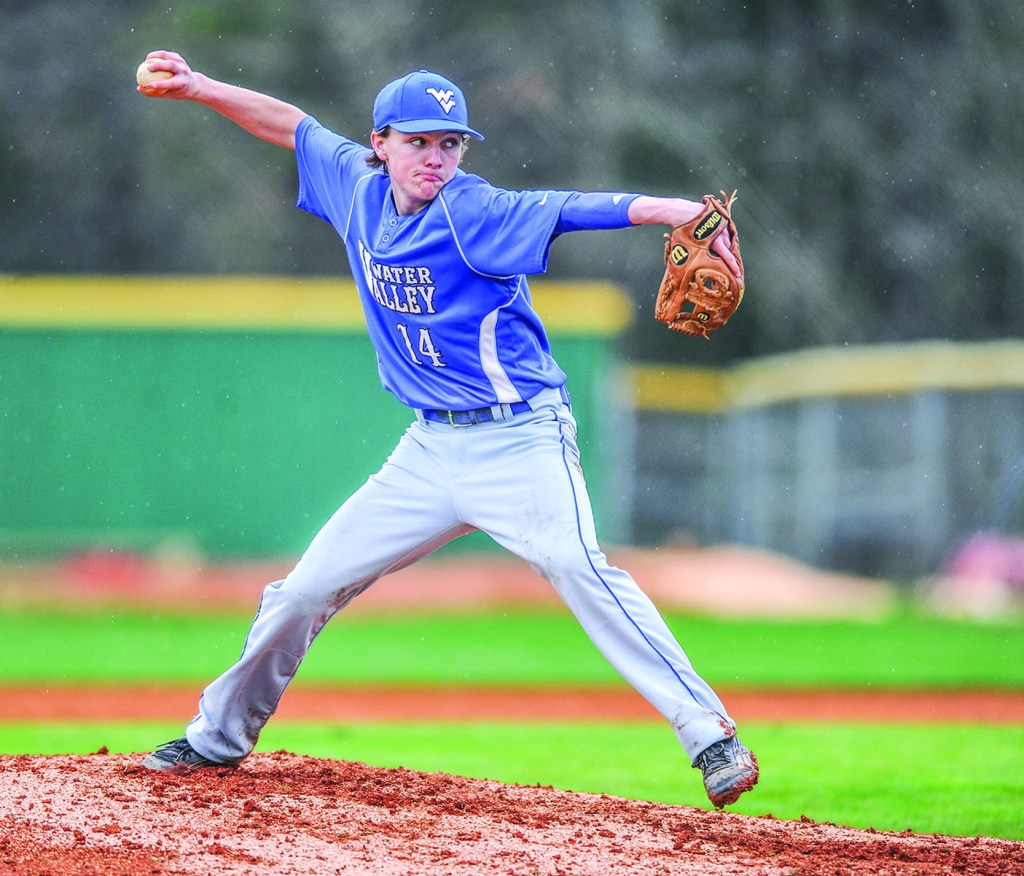 Water Valley senior Cooper Clement (14) will lead a Blue Devil pitching staff that is still searching to fill out the rotation behind him.

With more than half of his starters returning this season, the concerns for Kary Bridges are minimal.

But there’s one that is sticking out for Water Valley’s baseball coach.

“If you look at it, we return three guys who’ve played a whole lot,” Bridges said. “You talk about Cooper and Austin Smith and Carson Sharp, all three of those guys got significant playing time since they were freshmen. That’s a great leadership start and experience start.”

Donovon Gaston also returns as Water Valley’s full-time designated hitter, though the senior could also play third base to spell projected starter Garrett Bynum, a junior. Smith is also an option to move back to third base, a position he’s played before, should eighth-grader Blain Clark prove to be ready to take over full-time at second base.

“We hope (Clark) is ready to play second base for us, but that’s just something you have to wait to see how the start of the season unfolds,” Bridges said. “We hope that happens.”

Gavin Darby will take over in center field, taking the place of the graduated Jonathan Kent, while Kenny Goolsby will alternate between left and right field depending on who’s pitching. Gaston, Brian Willhite and Mackenzie Gordon are also players who could see significant time in the outfield, a place Bridges envisions a lot of mixing and matching.

“Outfield is a huge question mark,” Bridges said. “We could have some moving parts out there early in the year and just seeing where that leads us.”

Arms race
But no question mark looms larger for the Blue Devils than the set of arms they’re going to throw at opponents this season, particularly once Region 2-3A play begins in March. Water Valley opens the season Saturday in the New Albany Classic against Booneville.

Water Valley has to replace its top pitcher for the second straight year following the graduation of Skyler Defer, who’s now pitching for Northeast Mississippi CC. Bridges said Clement will take over as the No. 1 starter while Darby, Goolsby, Smith, Gaston and Clark are all vying to be the Blue Devils’ second option for region games.

Darby and Goolsby give the Blue Devils a different dimension as left-handers, but none of the options behind Clement, Bridges said, have taken the ball on that type of stage.

“There’s going to be a guy or two that hasn’t pitch on a Tuesday or Friday night. That’s a big deal,” Bridges said. “That’s a tougher deal than on Saturday when, not that the games don’t mean anything, but it’s just not the same level of scrutiny there. That’s always a concern.”

Regardless of who’s on the mound, the group’s makeup will be to pitch to contact rather than relying on strikeouts as in years past. The support of some early runs from a veteran lineup wouldn’t hurt either until the Blue Devils figure things out on the mound, though Bridges said his offense won’t stray too far from its usual pressurized approach.

Championship potential
Darby will be back in the leadoff spot while Clement, Smith and Sharp will be counted on as run produces in the middle of the lineup. Should the pitching eventually catch up, Bridges believes his team will have all the ingredients to make a serious run at a state championship.

“Every year, I thought we have achieved about what we were capable of doing and being one or two pitches or one or two plays away from possibly reaching our ultimate goal,” Bridges said. “If you keep doing that, keep knocking on the door and keep putting yourself in that position, I do feel like it will happen. I don’t see why this year is not a year that we could be in that same scenario.”