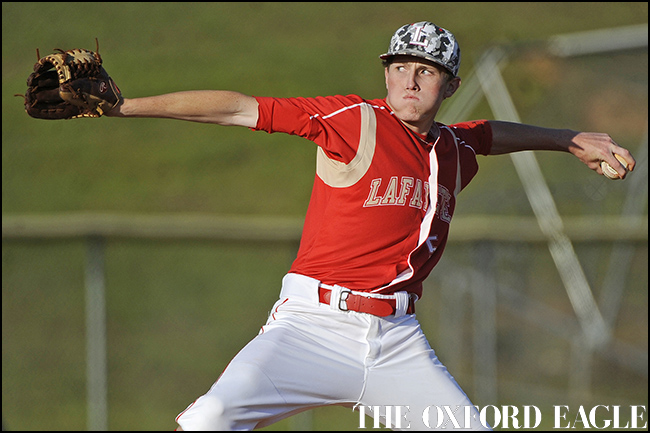 Left-hander Mack Bishop returns to anchor Lafayette’s pitching staff after going 8-1 with a 1.06 ERA a season ago.

Having a roster handy would be a good idea for fans attending Lafayette’s baseball games this spring.

Graduation plucked nine seniors from last year’s team and more than half the starters from the Commodores’ everyday lineup, leaving an influx of new talent to try to pick up where a team that advanced to the North Half finals of the MHSAA Class 4A playoffs left off.

They’re also being led by a new coach. Sort of.

Greg Lewis was hired in the summer to replace Patrick Robey, who led Lafayette to three straight playoff appearances before leaving for the same position at Madison Central. Coaching the Commodores isn’t new to Lewis, who’s beginning his second stint at the helm after stepping down following the 2012 season to pursue an administrative role in the school system.

With the season just two days away — the Commodores host Lewisburg on Friday at 7 p.m. — Lewis said everybody involved has been taking the right approach.

“Having the guys back out there and just working with them, it’s been a lot of fun,” Lewis said. “What I’ve been pleased with is just how much competition we have at every position. We lost those nine seniors last year, so practice is a lot of fun because guys are competing every day.”

Lafayette’s infield was hit hardest by the departures as John and Eli Murphree, Chase Coker, Ryan Holland and catcher Jake McPhail, the Commodores’ leading hitter last season, will have to be replaced. The Commodores have some experience back in junior Luke Gossett and senior Mack Bishop, who helped man first base at times a season ago, but Lewis said there could be constant rotation among Will Cullen, J.P. Marquis, Khalil Martin, Will Ard, Corey Taylor, Parker Brown and John Tate Roberts well into the season until the position battles around the infield settle themselves.

Plenty of options
The Commodores also have a surplus of candidates who could see significant time in the outfield in Will Christian, Bryce Hertl, Xavier Martin, Drew Ursic, Dillon Woods, Reed Robinson and Tyler Williams. Ross Ingram is in line to take over for McPhail behind the plate, Lewis said.

“I hope we’re pretty close (to solidifying the lineup) by the time we hit that district time or even by spring break time, but I feel like some of those guys are still going to rotate because I’m going to give them a shot at it,” Lewis said. “It’s going to be theirs to win or lose, and I want to try to give all of them a fair shot at trying to get that spot or being that guy that we can rotate in if we have to.
“It’s just a little bit different because it’s a lot of options this year, guys that can rotate. And they are rotating.”

Things aren’t nearly as fluid at the top of Lafayette’s rotation as Bishop will anchor the pitching staff for the second straight year. The southpaw went 8-1 with a 1.06 earned run average a season ago, averaging more than a strikeout an inning.

Lewis said he feels good about the arms behind Bishop as well in Gossett, Robinson, Will Ard and Marquis. The coach isn’t as certain about the young defense that will be playing behind them.

“I think we’re going to be deep on the mound,” Lewis said. “I think the mound is one of our strengths. I just hope we play defense. We don’t have that guy that’s just going to go strike everybody out or anything, but you’ve got Mack coming back. He should be solid.”

Gossett, Ard and Christian will be counted on as run producers in the middle of the lineup, but Lewis said he’s had his offense use a lot of small ball during practice to try to get the new-look defense ready for what it will see once games start.

“I feel like they’re behind a little bit as far as playing time because they haven’t played, so we’ve been trying to pressure them and pressure Ross behind the plate by stealing bags, doing hit and runs, doing bunts all the time,” Lewis said. “Whether we get an out or not, I put somebody on base or put bases loaded just trying to continuously give them those pressure situations to see if they can grow up quickly.”

But all the youth and inexperience doesn’t necessarily mean the Commodores are expecting to take a step back this season. The bulk of last year’s graduating class helped lead Lafayette to the North Half finals as freshmen in Lewis’ last season before stepping down.

Lewis isn’t ruling out the possibility of a similar scenario in his first year back.

“Maybe if I hadn’t had that group of freshman my last year to make such a deep run to the North Half before, I may say different,” Lewis said. “But this team is as good or maybe a little bit better because they’re a little bit older than those boys we pulled up that year, and I know we’re deeper on the mound. If those three or four guys can do a good job on the mound, I feel like we can make a big run at it.”

STAYING ALIVE: ‘Dores hold off Shannon, advance in 4A…