MIXED REVIEWS: Despite victory, Rebels have ‘got to get better’ 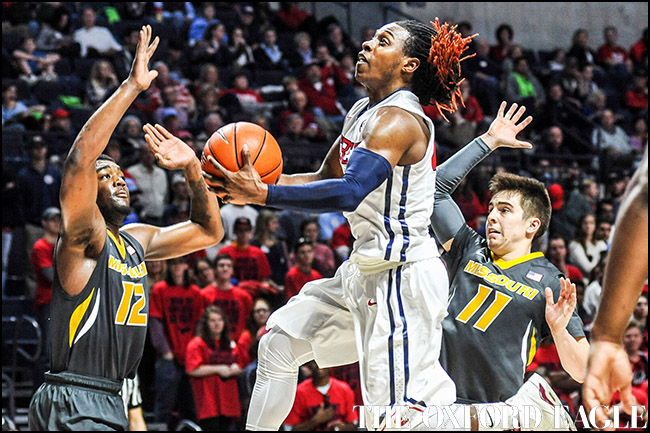 Ole Miss won its latest game, but there wasn’t much celebrating going on afterward.

For a team trying to piece together a last-ditch effort at an NCAA Tournament run, the Rebels don’t have time for it.

Stefan Moody scored a game-high 29 points to lead the Rebels to an 85-76 win over Missouri on Tuesday at the Pavilion. Sebastian Saiz notched his seventh double-double of the season with 15 points and 14 rebounds while Tomasz Gielo had 12 points for Ole Miss (18-10, 8-7 Southeastern Conference).

But head coach Andy Kennedy and his players know they have to have better efforts down the stretch against teams that aren’t sitting at the bottom of the SEC standings. The first of three games to end the regular season comes Saturday with a trip to Georgia.

“We’re going to take (the win), but we’ve got to get better,” Kennedy said.

Missouri began the night with a 24-game road losing streak dating back to 2014 but stayed close for the first 30 minutes with the help of its bench, which accounted for half of the Tigers’ points. The Rebels used a 10-0 run to go up 64-54 midway through the second half and kept Missouri at a distance the rest of the way.

Moody, who also dished out a career-high eight assists and tied a career-high with eight rebounds, carried the Rebels on a pedestrian shooting night teamwide. Ole Miss made 40 percent (26 of 65) of its shots from the field and just 25 percent (7 of 28) from 3-point range with Moody going 8 of 19 from the floor and Saiz going 4 of 11. Saiz, in his fifth game back from eye surgery, also made just half of his 14 free-throw attempts.

“Really just things on the defensive end,” Moody said when pressed on where the team needs to make strides. “Scoring hasn’t really been much of an issue for us throughout the year, so it’s really just been our defense. We’ve got to make a better effort at stopping teams.”

The Rebels’ array of defensive looks got to the Tigers in the second half as Missouri knocked down just 41 percent (10 of 24) of its shots in the final 20 minutes. Ole Miss, which stretched its lead to as many as 16, forced the Tigers into 18 turnovers and scored 22 points off of them.

“I thought we were really loose early and free flowing,” Kennedy said. “I didn’t like the flow at all. Thank goodness our half-court pressure in the second half really rattled them, allowed us to get out in the open floor and make some plays.”