Oxford Bass Club has been around for about 40 years 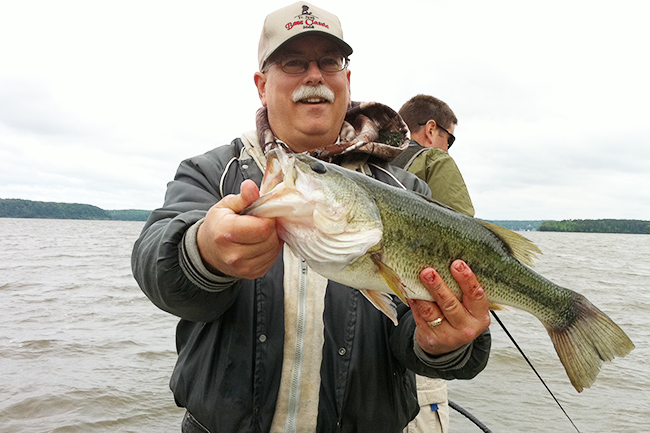 Dave Robakiwicz Dave Robakiewicz holds up a 5-pound bass he caught while fishing with the Oxford Bass Club. The OBC, which has been active since the mid-1970s, is looking for new members.

As a member and current president of the Oxford Bass Club, Dave Robakiewicz has seen the benefits of fishing in some of the greatest waters in the United States. But there is so much more than just catching monster bass.

“The OBC gives you an opportunity to fish with some of the best bass fisherman in North Mississippi,” Robakiewicz said. Being in the club allows you to “learn new fishing techniques and learn how to use your sophisticated electronics while strengthening your fishing network and build long-lasting friendships.”

The Oxford Bass Club has been around for about 40 years and has grown from about a dozen members to around 50 anglers who compete for cash and prizes during monthly tournaments.

The club is actively seeking more members to join them and enjoy fishing together in a competitive atmosphere.

“Our objective is to provide men and women an opportunity to meet new people from varying backgrounds and occupations who enjoy fishing,” Robakiewicz said. “Our members range in age from mid-20s to mid-70s.”

According to Robakiewicz, Paul Briscoe is currently the longest tenured member of the OBC still fishing. Brisco joined the club in the 1980s.

A lot has changed with the OBC since its founding, including its original name — Oxford/Lafayette Bass and Conservation Club.

The biggest change is the format of the tournaments.

Up until 1985, there were members that were either boaters or non-boaters, Robakiewicz said.

“There was a draw that matched them together. Each participant in the boat fished against each other.”

“The fishermen grew more competitive and had a need to keep spots and techniques secret,” Robakiewicz said. “The format was changed to pick-a-partner. Members in a boat were now teams fishing against other team boats.”

During that time, the OBC also fished against other area clubs including the Batesville Bass Busters, the Grenada Bass Club, the Holly Springs Bass Club and the Clarksdale Bass Club. The OBC also had tournaments that pitted husband and wife teams against each other.

As the competition grew, so did the fishing and boating equipment — in particular boats and motors.

In the ’70s and ’80s, boats averaged 15 feet in length and were constructed either out of aluminum or fiberglass with either a 90 or 115 horsepower motor. The average boat went 35 to 40 mph back then. Today, most boats are made out of fiberglass and average 18 feet with 150hp engine to 22 feet with up 300hp engines.

“The faster boats afford the chance to get to a fishing spot quicker with more time to fish and depart later from the fishing hole to get to the weigh-in at the boat ramp.”

The electronics used to find fish has also changed since the ’70s with the use of GPS around 2000.

“The first I can remember was used by an airline pilot in his large 21-foot Ranger boat,” Robakiewicz said. “I remember using my oar or an anchor to check the water depth when I began fishing in 1984. Now I can turn on my depth/fish finder and navigation system and find my way back to where I caught fish five years ago.”

He said many of the “fish finders” are now the size of a portable 15-inch television.

“They can even give you access to the Internet,” Robakiewicz said.

The OBC has also expanded the lakes they fish. Primarily in the ’70s and ’80s, the OBC fished Sardis, Enid and Grenada lakes. It was extended in the ’90s to include Bay Springs, Pickwick, Moon Lake, Tunica and Ross Barnett. This season, OBC will fish Sardis, Enid, Bay Springs and Pickwick.

A tournament meeting for the 2016 season will be at 7 p.m. March 10 at Pizza Hut on Jackson Avenue.

Oxford man makes name for self in Special Olympics