BACK TOGETHER AGAIN: Senior quartet reunites to lead Chargers in bid for another championship 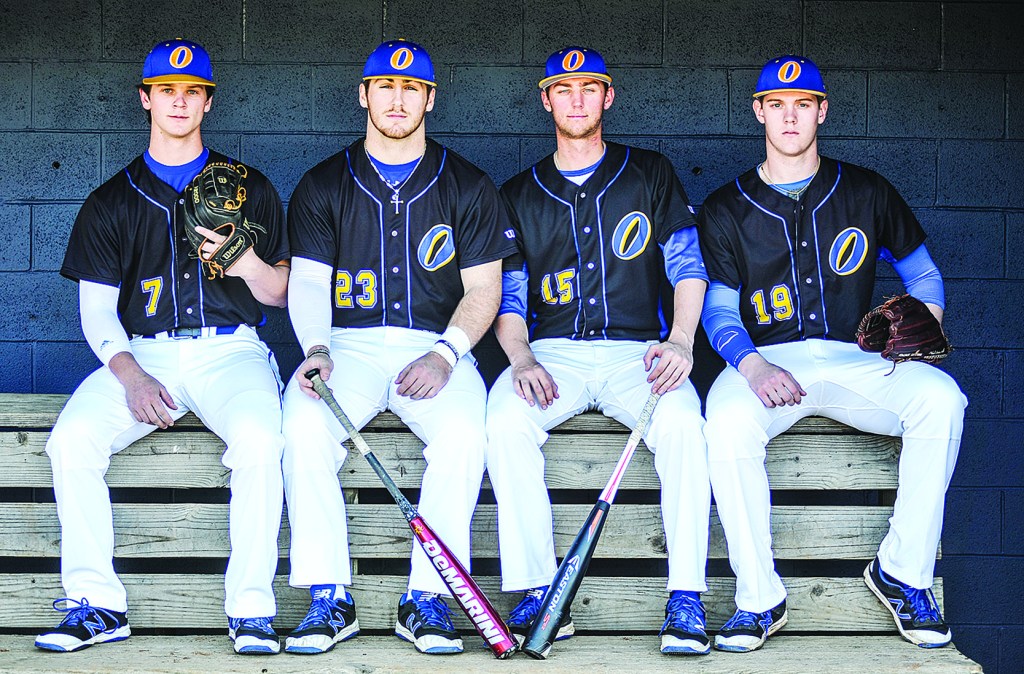 (From left) Jason Barber, Thomas Dillard, Grae Kessinger and Houston Roth are the headliners of a talent-rich Oxford team. Playing together for just the second time ever, the four Ole Miss signees will attempt to lead the Chargers to a second straight Class 5A state championship this season.

The four of them look at each other, trying to remember who beat whom.

Jason Barber, Houston Roth, Grae Kessinger and Thomas Dillard grew up playing baseball together. Some played with each other, but more often than not, they spent their youth and summer ball days trying to earn bragging rights over one another.

Each believes his recollection of how often that happened is clearer than the rest.

“We’d split it,” Barber says with a grin. “Houston and I played up though, so we only got to play (Kessinger) occasionally.”

Dillard quickly focuses the conversation on his matchups against Kessinger before Kessinger stops him.

“I definitely won in Thomas’ matchups,” Kessinger says. “I had that one.”

“He won our matchups,” Dillard says. “I might’ve gotten one or two here and there, but it was basically their team that won.”

Now the foursome is grown, each set to begin his senior season of high school ball. And none of them have to worry about keeping count anymore.

Barber, Dillard, Kessinger and Roth are all on the same team this year as the poster boys of Oxford’s uber-talented squad. All four have signed with Ole Miss, fueling talk that this year’s group of Chargers is more complete than last year’s Class 5A state championship bunch and is in the discussion as the most talented team in the country.

“I feel like if we don’t make it to state and win it, it’s just a bust,” Barber says.

Barber, Roth and Kessinger were all part of last year’s title run, which included the first undefeated regular season in school history. Barber, who posted a zero earned run average for the season, and Roth (1.26 ERA) went a combined 21-1 on the mound while Kessinger brought slick fielding at shortstop and stability to the top of the Chargers’ lineup.

The rich got richer when Dillard joined the Chargers this past summer.

Dillard, a switch-hitting catcher who will provide thump in the middle of the order, spent the first couple of seasons of his prep career at Briarcrest Christian School in Memphis, but after BCS made a coaching change after last season, Dillard decided to transfer.

With two older sisters already living in Oxford, there was only one option.

“My sister had her daughter about a year ago. My other sister is having a baby this summer,” Dillard says. “The grandma in my mom kicked in, and she wanted to be down here with them. Knowing that this is one of the better teams in the nation and having an opportunity to play for them is definitely just a chance I couldn’t pass up.”

Dillard’s move brought the childhood friends together on the same team for just the second time ever. The only other time was two summers ago as members of the Dulin Dodgers 16-and-under select team.

“Getting a player like Thomas is huge, but also us all being close friends and getting to play this senior season together and then moving forward to Ole Miss and all of us staying together, it’s something not everybody gets to do,” Roth says. “It’s just really special, and I’m looking forward to having one last senior year with all these guys.”

The Chargers did that pretty well last season, losing just once on the way to claiming their second state title in program history. More than half the starters from that team are back with Dillard stepping in to replace Jack McClure, who graduated after leading Oxford’s regulars with a .446 batting average.

That blend of talent and experience has Oxford ranked as a top-5 team nationally by several publications, including a No. 1 preseason ranking from MaxPreps, and has made the target on the Chargers’ proverbial back even bigger — starting with their four Southeastern Conference signees.

“I know for me personally and these guys, I kind of like having a target on my back because you get the other team’s best every time,” Dillard says. “Being ranked No. 1 in the nation is an honor, and you’ve got to live up to it. With great power comes great responsibility. We’ve got to play our game and do our best every day when we come to the field.”

Says Oxford coach Chris Baughman, “Most of them are quiet guys and quiet leaders, but everybody looks up to them. Everybody enjoys watching how they go about it.”

Barber, the reigning Gatorade Mississippi Player of the Year, and Roth make up the state’s top pitching duo while Kessinger and Dillard are Under Armour All-Americans, but the group insists there’s no power struggle. Personal accolades and rankings are rarely discussed. Egos, they say, don’t exist.

“We all get along. There’s no jealousy,” Kessinger says. “If one person is getting attention from somebody and the other one is not, we’re happy for them. It’s not, ‘I wish I was over there.’ When we get on the field, we just want to win.”

Says Dillard, “Everybody is selfless, and we’re all working for the same goal.”

There are no qualms about what that is either.

“Undefeated is not a thing I’m too worried about as much as trying to get back to Jackson and win another ring,” Barber says.

MIXED REVIEWS: Despite victory, Rebels have ‘got to get…