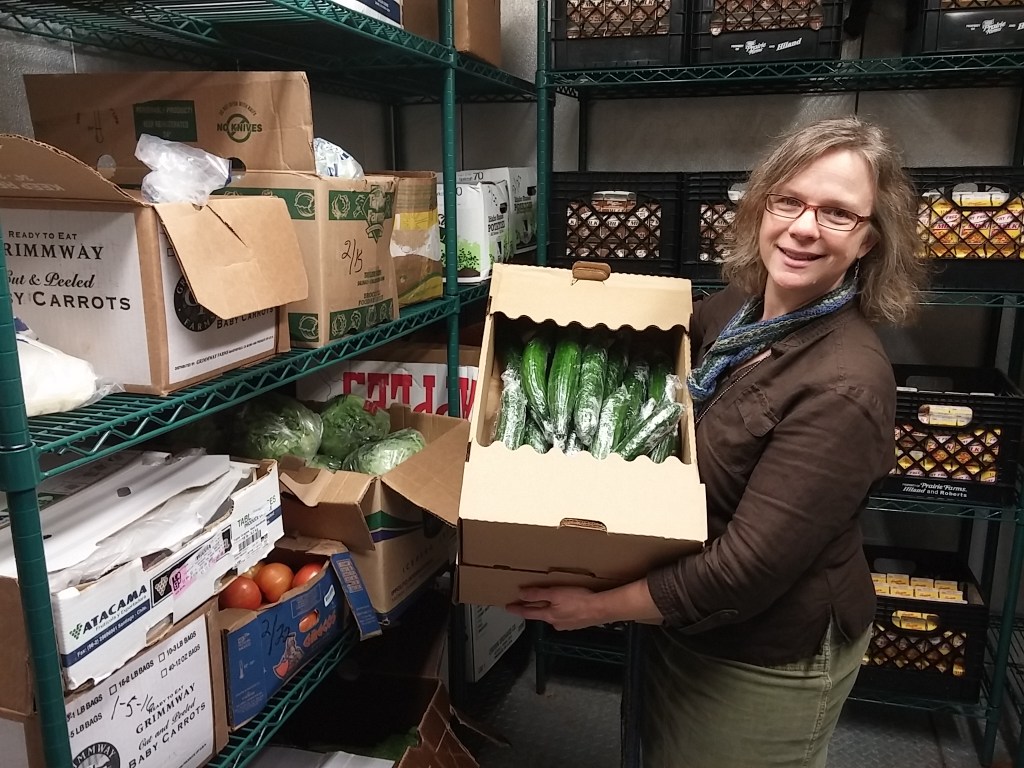 Eleanor Green shows off a box full of locally grown cucumbers at Oxford Middle School. Each school in the Oxford School District received a batch this week as a part of the Good Food for Oxford Schools program.

Oxford’s school children have a new champion for health in their corner.

Eleanor Green, 43, has been the Good Food for Oxford Schools program director since Jan. 19 and is already well on her way to keeping fresh food on lunch plates.

Green plans to use her background with farming to get more local farms involved with the school district.

“My goal is to increase the number of locally sourced food items in our cafeteria and to continue the movement that the district chef and the child nutrition director have started in improving school lunches,” she said.

Green will continue the school’s efforts in the program’s new funding cycle with USDA; that partnership was announced last fall.

“Good food for Oxford Schools started in 2013 and it’s to help improve the eating habits of Oxford kids and educate them on where their food comes from, the importance of eating well and to support local farms and industry,” she said.

The district has purchased fresh food from St. Bethany Fresh in Pontotoc and Woodson Ridge Farms in Oxford, and Green wants to increase that list every year because of the benefits in the cafeteria.

“Since the program started, more than 75 percent of the meals are made from scratch,” she said. “We’re trying to have more scratch ingredients so it is made here, it’s fresher and it’s better for the kids.”

Also partnering with the school district is United Way of Oxford and Lafayette County, whose funding has enabled a Food Corps member to work on food gardens at the schools. There are gardens at all of the schools except for Oxford Middle and Oxford Intermediate, and they will likely be in place at OMS by the end of the year.

“Last week at Della they harvested some spinach and carrots and the kids had a snack,” Green said about the elementary school.

“Our next family cooking class is March 7,” Green said. “We’re going to do breakfast for dinner to celebrate the beginning of National School Breakfast Week.”

In addition to gardens, another goal down the line is to can and freeze fresh items that can be used in the winter. For example, freezing tomatoes so tomato soup can be served fresh in December.

“This is where a lot of our kids get their main nutrition of the day,” Green said. “With the health-related problems in Mississippi related to poor diet this is where to start making a difference.”