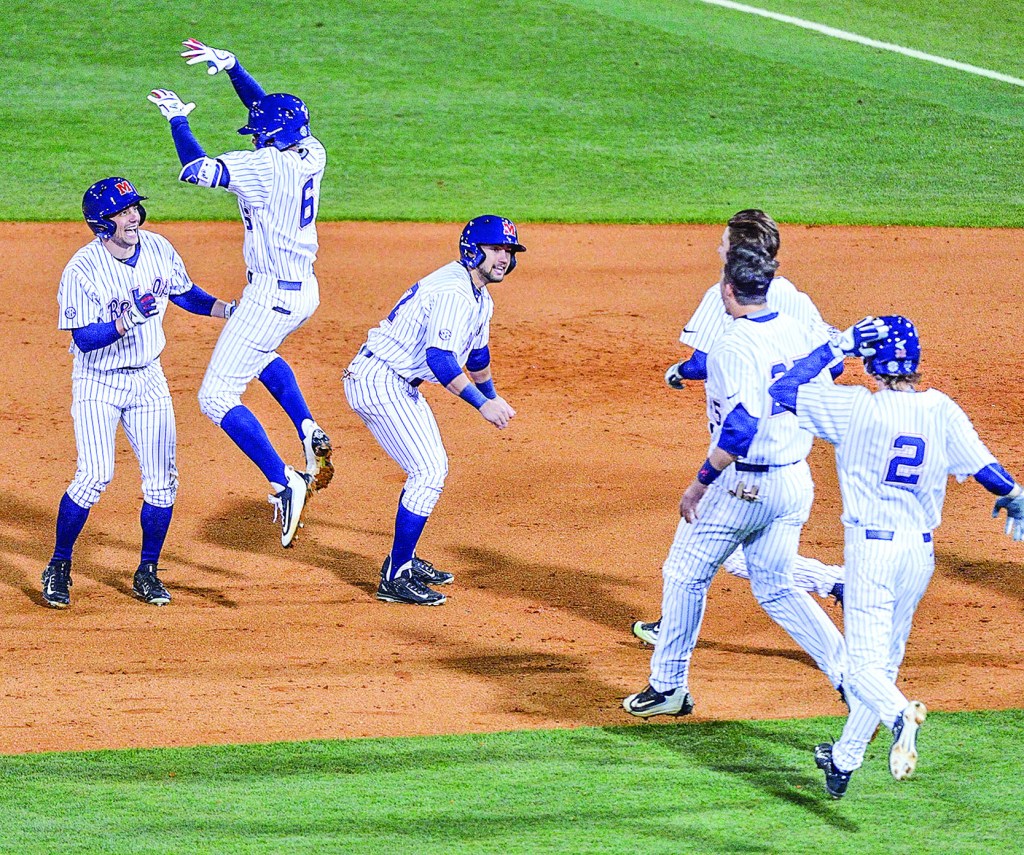 Ole Miss’ Cameron Dishon, left, is congratulated by teammate Errol Robinson (6) after hitting a sacrifice fly to drive in the game-winning run in the bottom of the ninth inning against Arkansas State at Oxford-University Stadium on Wednesday. The Rebels won 4-3.

With the No. 2 team in the country coming to town tomorrow, Ole Miss needed to keep its momentum from the opening weekend.

Cameron Dishon made sure that happened. The senior left fielder hit a bases-loaded sacrifice fly to center field, scoring catcher Henri Lartigue to beat Arkansas State 4-3 in a walk-off at Oxford-University Stadium on Wednesday. It’s the seventh straight time the Rebels (4-0) have beaten the Red Wolves (2-2).

The game was a makeup from Tuesday when it was postponed due to inclement weather.

“This is a tough game, and there’s going to be days that you don’t play well,” Ole Miss coach Mike Bianco said. “We had three good offensive days this weekend and one bad offensive day today. Pitched really well, played good defense and enough hits at the right time to pull one out. It’s early, but the good clubs figure out a way to win.”

Freshman James McArthur got his first start, and it was his second appearance on the season.

The right-hander was knocked around, giving up two earned runs on three hits in three innings of work. The Red Wolves struck first with a two-run second inning on an RBI single from right fielder Ty White. Then McArthur walked in the second run with the bases loaded later in the inning.

“I was proud that he hung in there,” Bianco said of McArthur. “We got about what we wanted to out of him, about 60 pitches. I was proud his best inning was his last inning.”

The Rebel offense was slim, but Ole Miss mustered four runs on six hits to escape with the win.

Lartigue reached on an error by White, which scored Colby Bortles and Tate Blackman to tie things up 2-2 in the bottom of the third. After Arkansas State pulled ahead with a run in the seventh, the Rebels responded with a run in the eighth off a Blackman RBI single, scoring Golsan to tie it up before Dishon’s walk-off hit the following inning.

“I was looking for something in the zone, something I could handle,” Dishon said. “There’s some that you got to find a way to win. You got to find ways and you might not play well early, but we played well when it mattered.”

Robinson returns
After missing his first game after 94 straight starts on Sunday due to an infection in a finger, shortstop Errol Robinson returned to the lineup Wednesday. He went 1-for-4 with one strikeout.

“It was good to get in today and get my start,” Robinson said. “Really just ready for the weekend.”
Ole Miss opens the big weekend series against Louisville on Friday with first pitch set for 4 p.m.