TOO MUCH: Rebels fall to No. 3 S. Carolina, drop home finale 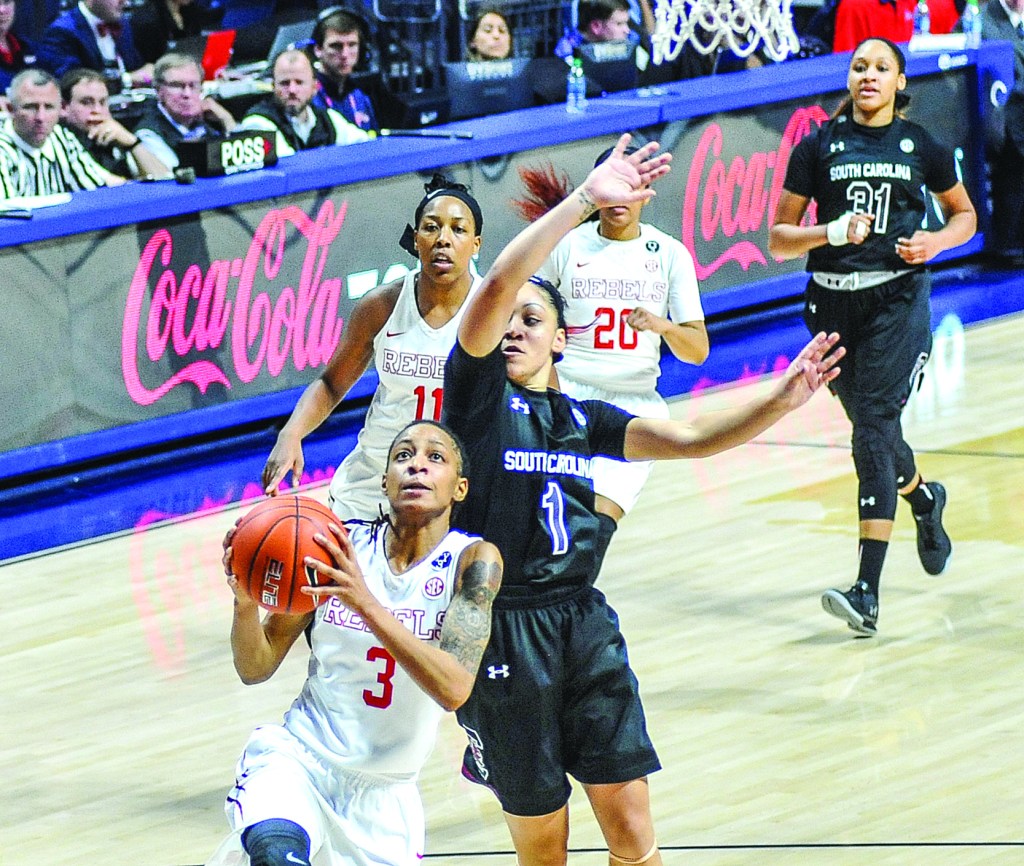 Ole Miss’ A’Queen Hayes (3) drives in on South Carolina’s Bianca Cuevas (1) during Thursday’s game at the Pavilion at Ole Miss. Carolina sent the Rebels to their ninth straight loss with a 66-45 win.

Ole Miss kept it close for nearly a half, teasing another upset to a top-25 team, but South Carolina proved why it is one of the best teams in the country.

The Rebels dropped their home finale, 66-45, to the No. 3 Gamecocks Thursday night at the Pavilion. The loss extended the Rebels’ losing skid to nine. They have lost 13 of their last 14 games.

Guard Medinah Muhammad did everything in her power to keep the game from getting away from Ole Miss (10-18, 2-13 Southeastern Conference) too quickly. In the first half, Muhammad had 14 of Ole Miss’ 19 points. She finished with a game-high 20 points and two rebounds.

South Carolina (27-1, 15-0) trailed a couple different times early in the half but eventually muscled its way to a comfortable 34-19 lead at the break.

The Rebels opened up the second half with a 13-8 run, cutting South Carolina’s lead down to 10 before the Gamecocks pulled away for good late in the third quarter.

The Gamecocks were led by sophomore forward A’ja Wilson with 16 points. Alaina Coates added 11 points and had a game-high 14 rebounds.

More of the same
The shooting woes continued for Ole Miss, which went 14-for-63 (22.2 percent) from the field. The Rebels were successful from long range, hitting 10 of 17 (41.2 percent) from behind the 3-point line. Muhammad and Shandricka Sessom combined for seven 3-pointers.

The defense was there for the Rebels again, causing 29 South Carolina turnovers, but Ole Miss could only score 27 points off them. South Carolina’s dominance came in the paint where the Gamecocks outscored the Rebels 40-8.

Ole Miss concludes its regular season on the road at Arkansas on Sunday before heading to Jacksonville, Florida, for the SEC Tournament beginning March 2.

BACK TOGETHER AGAIN: Senior quartet reunites to lead Chargers…