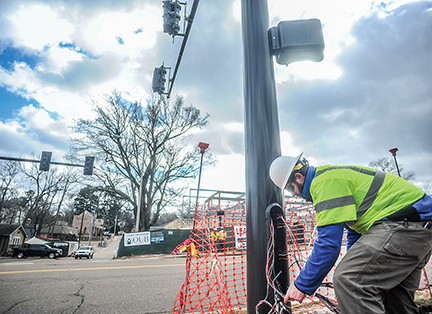 Joe Parker of B&B Electric is among workers installing a new traffic signal at the intersection of University Avenue and South 16th Street, in Oxford, Miss. on Thursday, February 25, 2016.

The poles were put up this week, but they are not functional yet.

Assistant City Engineer Reanna Mayoral said she wasn’t sure when the light would be operational but said it would function as a flashing light for the first week to give drivers time to get used to it being there.

“We’ll do that for about a week,” she said Thursday.

Developer Pat Chisholm, who has two multi-unit residential developments on South 16th Street, is paying to put in the light. The first one, 607 South, is 12 townhouses just off University Avenue on South 16th. Village Walk is under construction where the Oxford- University Bank used to be before moving into a new building further west on University Avenue. The development will include commercial space that will front University Avenue and 30, one- and two-bedroom units, geared toward students.

When Chisholm presented the plans for Village Walk before the Oxford Parking Commission last year, a traffic study showed that a traffic signal there “could improve the level of service” at the intersection. With more people living on South 16th Street, making the left-hand turn onto University Avenue is becoming more difficult.

“There’s a lack of left turning lanes and there would probably be more of a delay of people trying to turn left without the light,” Mayoral said.

The light should help draw drivers out of the neighborhood streets, she said.

“Many cut through the neighborhood now because it’s easier than trying to turn left onto University,” she said. “But people generally want to take the easiest and fastest route, and that’s University if they can make that turn.”

There will also be a pedestrian crossing signal at the traffic stop, making it easier for students and other people to cross University Avenue via walking.

“We really didn’t have any crosswalks from South Lamar to South 18th Street,” Mayoral said. “This light should make it safer for pedestrians and drivers trying to go left.”