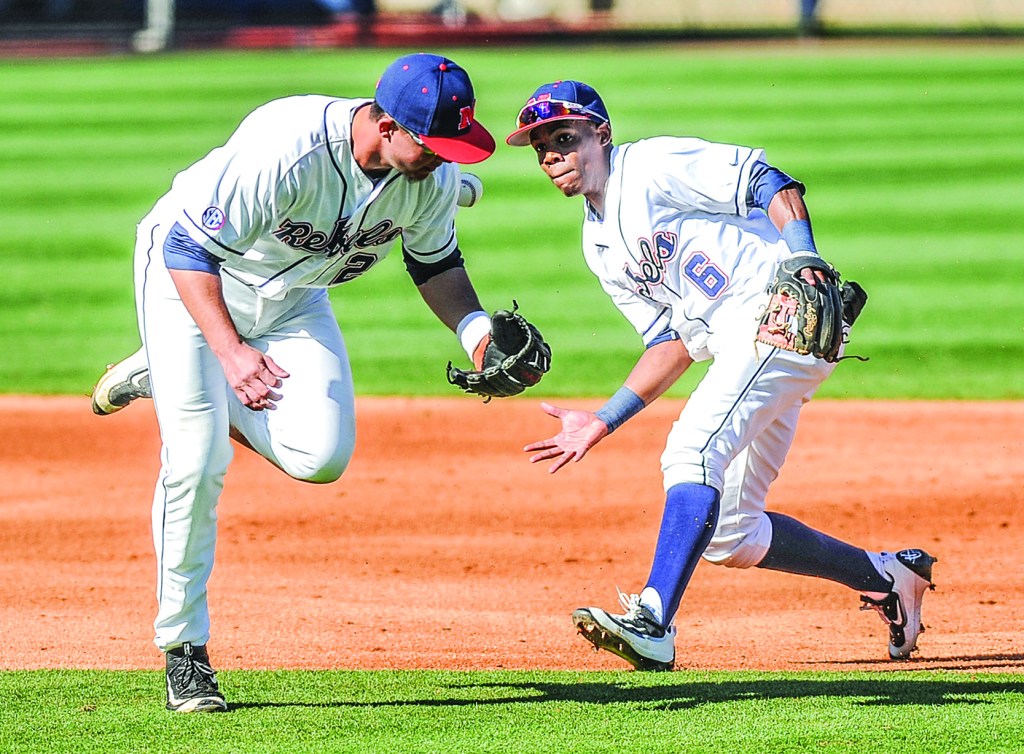 The ball gets past Ole Miss third baseman Colby Bortles (25) and shortstop Errol Robinson (6) for a single by Louisville during Saturday’s game at Oxford-University Stadium. The Rebels committed three late errors as Louisville won 4-0.

With runs at a premium, the game was going to come down to who made a mistake first — or more of them.

It ended up being Ole Miss, which committed three errors and lost 4-0 to No. 2 Louisville on Saturday afternoon at Oxford-University Stadium.

After a shaky start to his Rebel career last week, Chad Smith had a much steadier second outing on Saturday. The right-hander went seven-plus innings, making it the longest outing by an Ole Miss starting pitcher on the young season. Smith gave up one unearned run on four hits and walked two.

“The command for the fastball was there. I was able to throw the fastball on both sides of the plate,” Smith said. “My slider was there, and my changeup was there at times. I was just trying to keep the hitters off balance as best I could. … When you get into a battle like that with another pitcher, it’s just fun. At the same time, you can’t worry about that stuff. You just have to worry about what you’re doing.”

The trouble was the defense behind Smith as the infield accounted for all three errors with the middle infield responsible for two of them.

Second baseman Tate Blackman and shortstop Errol Robinson had one error each with first baseman Will Golsan recording the third.

Blackman’s error was erased by a double play the following batter, but Robinson’s and Golsan’s were costly, giving Lousiville a 1-0 lead in the sixth inning. The Cardinals added three more in the eighth on four hits when Brady Feigl came in for relief.

Smith was solid for Ole Miss, but Brendan McKay was even better. The Louisville starter pitched a complete game and held the Rebels to three hits. Robinson, Blackman and third baseman Colby Bortles were the only ones to record a hit against the stingy left-hander. McKay faced one batter over the minimum.

The Rebels had zero runners in scoring position and were 0-for-4 in trying to advance a runner. The staring lineup went a combined 3-for-25 and struck out seven times.

“He was phenomenal,” Ole Miss coach Mike Bianco said of McKay. “We got to continue to fight and compete. There’s days where the other pitcher is just so dominant, but we’ve got to make him work harder. When they’re that dominant, we’ve got to foul more balls off. We’ve got to do something to get him over 100 pitches and get him out of the game.”

Friday
Brady Bramlett worked around trouble and the bullpen held off a late rally from Louisville as the Rebels won 6-5.

Bramlett worked five innings, giving up three earned runs on six hits and striking out eight. He worked out of trouble in the second inning, throwing 34 pitches to keep Louisville off the board.

The Cardinals finally broke through in the fourth when they added a run to cut into Ole Miss’ 2-0 lead after a two-run home run by J.B. Woodman in the second inning.

The wheels came off for Louisville in the home half of the fourth as starter Kyle Funkhouser issued five walks and the Rebels plated four runs to extend their lead to 6-1.

David Parkinson, Will Stokes and Wyatt Short pitched four innings of relief with Short earning his second save of the season.