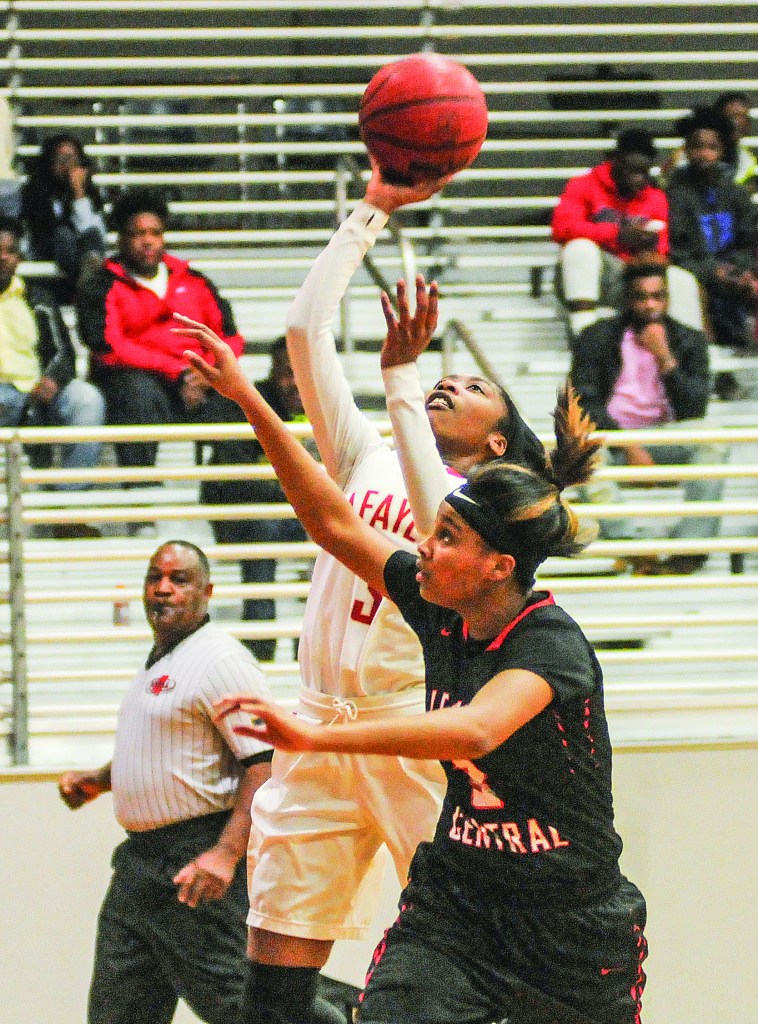 Lafayette’s Shaniyah Buford (3) shoots over Leake Central’s Teanna Moore (3) during Friday’s MHSAA Class 4A playoff game at the LHS gym. Buford led the Commodores with a game-high 26 points as Lafayette advanced to this week’s state tournament with a 68-30 win.

The Lafayette girls basketball team was one win away from heading south to Jackson. In the Mississippi high school basketball world, that means you are one of the top teams remaining in the state playoffs.

The Commodores wanted to make sure they were a part of that group, and Shaniyah Buford made sure it happened.

The junior exploded for 16 points in the first half, fueling Lafayette’s 68-30 rout of Leake Central in their MHSAA Class 4A second-round game Friday inside the LHS gym.

The win sent the ‘Dores (22-6) to Jackson for a quarterfinal game against Florence, which defeated East Central, at Jackson State University on Thursday at 5:30 p.m.

After Monday’s first-round nail-biter against Shannon that saw the Commodores win by two points, it was a different story Friday as Lafayette jumped out on the Gators early.

“I think they kind of expected to be there on Monday and just play their game and everything,” Lafayette coach Shayne Linzy said of his team. “That Monday game against Shannon really was a wake-up call that playoffs are totally different. The girls were focused this week despite some illnesses and things of that nature. That’s part of it this time of the year. They’ve been loose, but in a good way.”

Transition offense was Lafayette’s weapon of choice, beating the Gators up and down the court after making defensive stops or steals at midcourt and converting the layups. The ability to handle the passes and convert the easy buckets or even hitting contested shots pleased Linzy.

“Transition offense was great,” Linzy said. “We were able to find the open girl. More important, we were able to handle the ball in the open court even without my ball handlers. I had other girls who could handle the ball in open court and make the passes. That’s huge. That was great to see from my view point to see other girls step up and do that.”

Buford’s output helped Lafayette take a commanding 36-16 lead at halftime. With the comfortable lead in hand, Linzy’s message to his team at the break was simple — finish the deal and get to Jackson.

Staying in control
The Commodores were never threatened in the second half, but a timeout late in the third quarter was taken by Linzy to settle his girls down and reset for the closing stretch.

“My message was simple. We’ve got to put them away now,” Linzy said of his halftime speech. “We were in this position against Shannon on Monday night. Obviously not near the size of lead but still a lead nonetheless. My message was don’t change anything up.”

Lafayette knows that if it wants to do more than just be one of the eight teams that made it to Jackson, the Commodores will have to rely on Buford to be the point scorer they know she is and rely on her to create opportunities for her teammates.

“The girls realize that if we’re going to win, she has to score,” Linzy said of Buford. “She’s got to make things happen whether she’s scoring and/or creating mismatches so that way she can dish the ball off to people when she gets double teamed.”

In his first year at Lafayette, Linzy has taken his team to a point where only seven other teams get to reach in each class. It’s now time for his team to decide how far they want this season to go.

“Now that we’re there, what are we going to do about it?” Linzy said. “Are we just going to be happy to be there or take advantage of the situation and see if we can’t move to the next round?”

OM men have best finish in program history at…