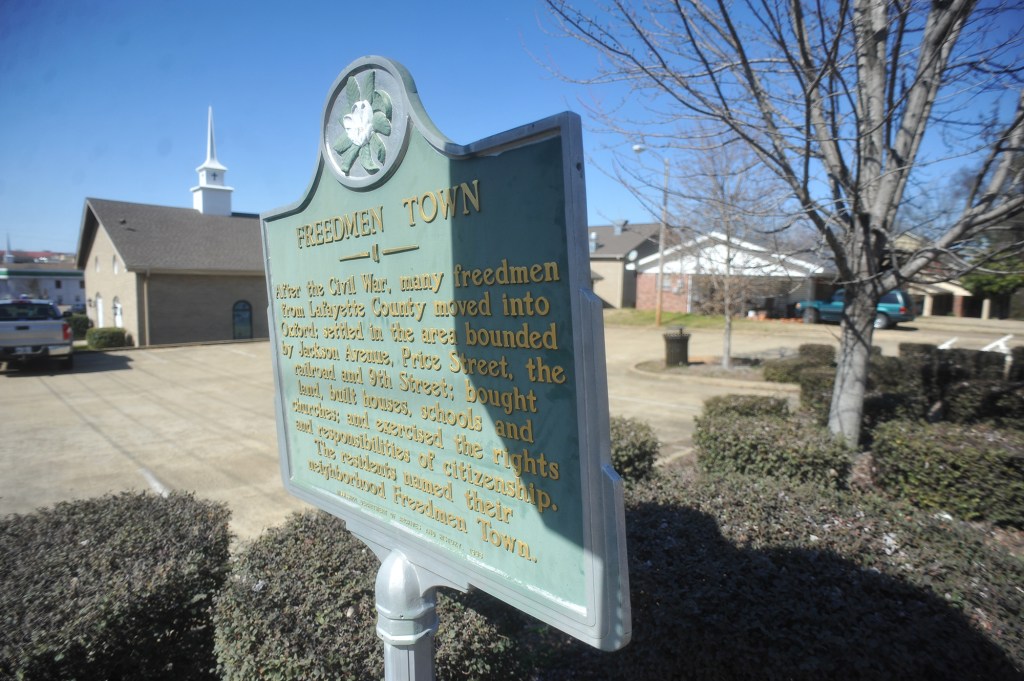 A historical marker notes the significance of Freedmen Town for Oxford and Lafayette County residents.

Freedmen Town has changed a lot since the 1860s, when it was an all-black neighborhood and the center of Oxford’s black culture.

Even though the area changed dramatically over the years, it remained a central hub for religion and education in the black community.

“Here, education has always been important even from the beginning days,” said local historian Jack Mayfield.

Mayfield, a board member of Oxford Lafayette Heritage Foundation who has dedicated many years to preserving the history of Lafayette County, said Freedmen Town encompasses the homes between North Seventh Street and Fifth Street and South Price Street to Jackson Avenue.

Lafayette County had more than 7,000 recorded slaves in 1860. After the Civil War ended and Reconstruction era had begun, the homes in Freedman Town were sold to former slaves who raised their families there.

If walking along what is now Martin Luther King Jr. Street 100 years ago, the streetscape was filled with small shotgun houses, which would mainly consist of three rooms at the most, a living room, bedroom and a hallway. Some had lean-to kitchens.

Although black businesses were not unheard of in Freedman Town, the nearby grocery stores had white owners.

The first black school was started in 1867 by preacher Alexander Phillips under the Freedman’s Bureau. Phillips also taught at the Oxford Female Colored School from 1874 until 1875.

There also was a Rosenwald School before it burned down. The name applied to schools across the nation that were established to educate black students.

The schools were named after Julius Rosenwald, former president of Sears, Roebuck and Company, who founded and contributed funds for building.

The original site of the Burns United Methodist Church was in Freedmen Town and is now the Burns-Belfry Museum and Multicultural Center dedicated to African-American history.

The building was organized in 1870 and in 1910 relocated to near the railroad depot. The current location is on Molly Barr Road at Washington Avenue, where it has been since 1975.

After the civil rights movement, which lasted until the late 1960s, the town began to see change. The Urban Renewal Program dramatically changed Freedmen Town forever.

The original initiative of redeveloping less affluent American cities began in the early 1900s, but was increased with the 1949 Housing Act: The Urban Renewal Program.

Mayfield said many black families were bought out of their homes and used the funds to move into the countryside of Lafayette County.

The older homes were torn down. Once newer homes were built, many were sold to new inhabitants of the neighborhood.

Howell moved into the area in 1972 at the beginning of development using the urban program.

Even with the moves, Howell said the neighborhood is still around 90 percent black.

The development caused many of the original families to spread out.

“That kind of broke up the neighborhood,” Mayfield said. “They just didn’t live in Freedmen Town like before.”

Essie Lee Archie, born in 1925, moved into the city from Lafayette Springs in the 1940s. She and her husband built a house in Freedmen Town in 1974 behind the development.

“They did a whole turnover,” Archie said.

Archie said the area was not a pretty sight before it was developed. Even though the neighborhood was close to the center of town, MLK Street was still a gravel road.

The majority of generational history of Freedmen Town, much like many original families, has dissipated over the years.

The neighborhood is far from the collections of shacks it used to be, but Freedmen Town’s legacy remains more than a collection of green historical markers.