Nothing can keep Roberts from chasing her goals 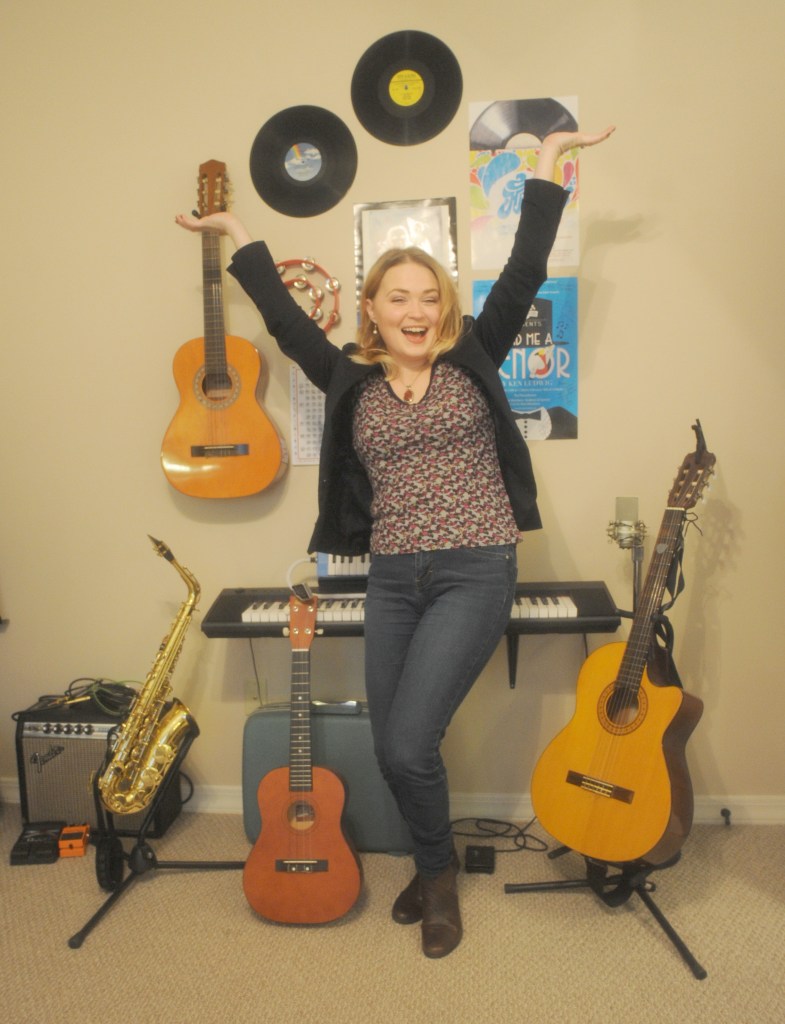 Cass Roberts is surrounded by some of her musical instruments. The 32-year-old student is wrapping up her theater degree at the University of Mississippi.

Cass Roberts can dress up and play a Disney character for a child’s tea party or haul an RV across the country for a customer, and she can most definitely sing you a tune about it all.

The 32-year-old is finishing her senior year at the University of Mississippi after some truck-driving soul-searching and is gaining momentum every step of the way pursuing her talents in Oxford, whether it’s stage left or singing into a microphone at a local hot-spot.

The New Albany native’s first time around at Ole Miss was in 2009-2010 to begin studies as a theater major.

“This is where my music career got started,” she said. “I started playing at bars around town here. The first place I ever played here was Two Stick, which is not a place anymore. I recorded at Sweet Tea, which is also not a place anymore. I was working at High Point on the Square so that allowed me to make more connections. It’s actually helping me now.”

Now music and theater buffs have a variety of places to see Roberts. Since her August return to town, she’s immersed herself in the arts. She performed at the February Maker’s Market. She played Maggie with Oxford Theatre’s “Lend Me a Tenor,” volunteered with the Oxford Film Festival and has a dramatic reading coming up at Shelter on Van Buren March 13 where she will read from the play “Other Hands” with fellow actors. She’ll be at Shelter March 7 at 7 p.m. singing and playing guitar.

She’s also serving as a talent scout for the Fringe Festival and will be on a crew with Ole Miss’ production of “A Midsummer Night’s Dream” in August.

She got a young start at acting, and it was her talents on stage that brought her to Ole Miss in the first place.

“I started acting in church,” she said. “We would always do musicals every year at New Albany Presbyterian. I was always one of the most active in the youth group and so I got put in a lead role all the time. In high school I was lead in ‘My Fair Lady’ and I got a lot of praise and encouragement from the directors of that show and it just sparked in me even more the love of acting.”

She then attended Northeast Community College where she was Ado Annie in its “Oklahoma” production. She received a scholarship for that role to attend Ole Miss.

So why did she leave Oxford before finishing her senior year to play at tea parties in Austin, Texas, and haul RVs from state to state?

“The checkered aspect of this story is I’ve had Crohn’s disease for 20 years,” she said. “So, there’s always been that obstacle that I’ve had to overcome or succumb to. That’s actually why I ended up dropping out of college. I just got too sick and I couldn’t carry on. But I was able to bounce back, and that’s actually when I started writing — out of that pain.”

Her initial songs were her therapy and the words and tunes were more sullen, but she’s now starting to write more joyful beats.

“Luckily I’m in remission right now, so that’s really what has facilitated this move to finish my degree because I know my body can handle it now,” she said.

While Crohn’s disease is incurable and she’s endured a lot of surgeries to get where she is today, she doesn’t take her improved health for granted and she helps others.

“It’s becoming more and more common for people to be diagnosed at a very young age,” she said, which has led her to become a camp counselor yearly at Camp Oasis, which is a safe haven for children with Crohn’s and colitis. “That’s been really fulfilling for me because I was diagnosed when I was 11, so growing up in Mississippi there was not a lot of support. I didn’t really have anyone. I didn’t know anyone with it. This was before the Internet. There really wasn’t much until I was 18 and they started to come out with a new strain of medicine.

“It’s just nice to be able to volunteer at this camp to help kids that might not have had the chance to see a young adult manage life and do it well and look up to that because I wish I had had that when I was young.”

Roberts left Ole Miss and headed west for Austin, Texas, to pursue a music career and “got distracted with the princess tea party industry.”

“Basically I would dress up like Cinderella or Ariel or whatever princess and go entertain at little girls’ birthday parties,” she said.

She became the lead princess and then managed the business when the owner moved to St. Louis. Eventually she decided to open her own princess tea party business and led it for a year and a half.

While in Austin she was in a couple bands and is still a part of one, The Glyphs, which released an EP last year. Also while in Austin she played singer/songwriter/solo gigs a lot. She even won a competition, Bridging the Music’s solo artist of the year. While there she also went on tour as a tapdancer for an artist on Chicago’s Drag City Records label, Bill Callahan, and even enjoyed a tour stop in Oxford.

“He wanted some kind of unique opening act, some kind of juggler, tap dancer or hula-hooper or some side-show act so to speak,” she said. “I ended up choreographing and just creating out of the abyss, this 20-minute tap routine that was everything from Broadway style to jazz style and I even incorporated some looper pedal.”

When she had enough tea, she turned to a gig her father introduced to her: driving a big dooley pickup and pulling RVs from manufacturers to dealerships. She did that for a year and a half with her sidekick, Tina Turner, her rescue dog.

“Being on the open road, there’s a lot of opportunity for soul-searching,” she said. “I started considering what I really wanted out of my life and what my true goals were. I knew that finishing my degree was something so close, only two 12-hour semesters left, so why don’t I just bite the bullet and do it.”

She made the family-oriented choice and returned to Ole Miss and is glad to be a short drive from her family in New Albany.

Roberts graduates in May, but with her favorite part of life being “the challenge,” she has options for the path she takes.

“I don’t think there’s any specific art I want to adhere to more than another, it’s just about finding those opportunities, finding my niche and applying the courage to tackle it,” she said.

One of her thoughts is to go back on the road and work for a company that moves RVs out west and save her money.

“I can take more time off between loads and take my guitar with me and tour while I’m out there,” Roberts said. “So even if it’s just an open mic tour, I’ve never really spent much time out west and I’d like to experience that and do it through art.

“It’s just a means to an end. I don’t want to truck forever. There are only two things I need in this world: the arts and other artists. Trucking has neither,” she chuckled. “So I’d really just like to make enough money to do a theater internship or move to another big city and try a career in backup singing or use the money to record a full-length album.”

She’ll use her inspirations to lead the way, which are her Crohn’s disease, a journals she’s kept for the past 14 years and any sort of music.

“Crohn’s disease is a huge inspiration because I think without vulnerability there is no creativity,” she said. “At least vulnerability is a place that creativity can come from. My influences are anything from big bands to bluegrass, progressive to pop, and classical to classic rock.”

Her art is a collage of everything that inspires her and she’ll continue her pursuit for inspiration wherever she travels after May.

And she’ll have her roadie and No. 1 fan, Tina Turner, along for the journey.