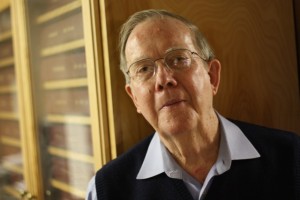 By Stephanie Rebman and Alyssa Schnugg

In seventh grade, Jesse Pittman Phillips entered the world of journalism by hopping on a bicycle and delivering the news to houses in Grenada. Years later he owned a newspaper and played a role in changing a community.

Phillips, a longtime businessman and enthusiast for the Oxford community, died Sunday at home after a lengthy illness.

Phillips, 84, was known for his various business and community endeavors, including his 53-year ownership of The Oxford EAGLE where he also served as publisher.

Through the newspaper’s voice Phillips helped facilitate integration of the local schools, provided a steady hand for race relations and stayed involved in economic development efforts.

“Jesse Phillips was one of the icons of our community,” said Oxford Mayor Pat Patterson. “In my experience I knew few people who cared as much for the LOU community as he did. I had the privilege to visit him during his illness and his concerns were still for the people of Oxford and Lafayette County instead of himself. He was a man of strong faith who has left a tall shadow and will be missed by many, myself included.”

Former mayor Richard Howorth said Phillips, through his role at the newspaper, stimulated Oxford’s development and was its cheerleader.

“Jesse has always been a thoughtful supporter of all things positive about Oxford,” Howorth said. “Education and economic development especially come to mind. He was also a friend to me. In City Hall I experienced the vital importance of a community newspaper to its citizens and elected officials, and Jesse’s leadership at The EAGLE was one of great significance to Oxford’s character — as was his personal integrity to all of us who had the good fortune to know him.”

In addition to his leadership at The EAGLE, Phillips served in various positions with the Mississippi Press Association and made an impact throughout the entire state, MPA Executive Director Layne Bruce said.

“The Phillips family, and in particular Mr. Phillips, had been extremely important to the press association especially during the time Mr. Phillips served as president of the association back in the 1980s,” Bruce said. “His loss will be felt far beyond Oxford because of his role as a respected and trusted newspaper man, and bigger than that, as part of the MPA family.”

Carolyn Wilson, who served as the press association’s executive director until she retired in 2007, said Phillips was active as the association “was coming of age in the 1970s.”

“He was very influential in his days on the board and with what they were able to accomplish,” she said.

Wilson said she also enjoyed camaraderie with Phillips when he attended national meetings while his son Dan became a leader with The EAGLE and active with the group.

“I got to be close friends with his parents,” she said of Jesse and wife Jeanette Phillips. “Mr. Phillips was always very gracious to us and thankful I was helpful to his son.”

Wilson said she visited the couple approximately a year ago, and they all enjoyed talking about horses and farming in their post-retirement days.

“I’m sure glad I got up there and got to have a nice visit with them,” she said. “He would always send me the nicest notes, always hand-written, through the years. I can’t tell you how special he was. I’m sure anybody that knew him thought the world of him.

“There’s just so many good memories.”

Leader in the church

In addition to leading the newspaper, Phillips served in just about every role possible at First Baptist Church of Oxford.

Administrative Pastor Robert Allen said Phillips wore many shoes with the church and said he was saddened by the loss of Phillips for the church and the greater community.

Phillips served as a deacon, on several committees, as head of a major building project and with Jeanette started the Sunflower Sunday School class for special-needs individuals at North Mississippi Regional Center.

Allen said Phillips was chairman of the last major building project that was concluded in 2002. The project enabled the church to have an education building.

“He’s worked in everything, and there’s been a void since Jesse has been unable to be active,” Allen said. “There’s been a void in our leadership. He was always encouraging to people as well. We really miss Jesse.”

Senior pastor Eric Hankins said Phillips served on the pulpit committee that called him to pastor the church 11 years ago, and he reminded the congregation Sunday morning each member can be thankful for Phillips’ efforts now and for years to come.

“The building projects for our church — they were big steps of faith and required a lot of commitment,” Hankins said. “That change is uncomfortable but he could just see it, and he helped other people to see it and buy in as well. Because of that our church is very blessed to have the facilities it needs long after Jesse’s health began to fail and kept him from coming to church.”

Longtime resident Kaye Bryant said Phillips was not only a man of high moral code, he was a leader and used the power of the press to work for education and better jobs in Oxford and Lafayette County.

“A tireless, civic worker, he was also a shrewd businessman,” she said. “A man with a strong work ethic, he instilled that in all three sons. Jesse Phillips was a man of vision and this town is much better off because he lived here.”

It was Phillips’ vision to see down the road, Hankins said, that enabled him to become a leader in integrating Oxford’s schools and being ahead of other places throughout the state.

“There’s many great things to say about Jesse,” Hankins said. “He really had great vision and the ability to see what’s next even when others might have trouble seeing it. Even with supporting public school, education and integration, Jesse was visionary and that has been huge for Oxford. When other communities did not support public schools, those communities suffered for it. Jesse was able to see the possibilities, and it’s a great strength for our community.”

When the Rev. Leroy Wadlington was the minority campus minister at Ole Miss, he met Phillips and the two began having conversations on how to move Oxford forward when it came to race relations.

“He was instrumental in bringing about positive changes to Oxford in his capacity as a publisher,” Wadlington said. “He tried to be very fair, but careful. He probably made some people uncomfortable, but he felt he had a responsibility to do what was right.”

Wadlington, who went on to serve as pastor at Second Baptist Church, said Phillips often would call on him for advice on how The EAGLE could help bring the white and black communities together, including desegregating the schools.

“He was really interested in making those changes,” Wadlington said. “He understood the culture in Oxford and to be sensitive but at the same time, he knew what he said and what he did, could make a difference.”

In a video made in 2010 by Mykki Newton for Ole Miss Journalism, Phillips was interviewed at length about how he got into the field, his quest to see Oxford schools integrated and his take on the future for newspapers.

In the video, Phillips said he met with a group of people in the 1970s to see what they could do to lead the community from segregation to integration, which was eventually accomplished successfully in Oxford.

“Having a part in leading the people through news stories and editorials, I look at this as one of the most important things, most important issue, we’ve had to be a part of,” Phillips said in the interview.

“Oxford has lost one of their strongest soldiers,” Wadlington said.

Leader in the community

Will Norton, dean of the Ole Miss’ Meek School of Journalism and New Media, said while saddened by the news of Phillips’ death, he knows he is in Heaven with son Dan, who died in 2005.

“They are walking around the Square of heaven and not worrying about press deadlines,” Norton said Sunday. “In the Bible they call someone like Jesse a righteous man. In a word, (Jesse) stood for what is right.”

Don Whitten, former editor of The EAGLE, worked with Phillips for almost 40 years.

“I’ll never forget those first job interviews with him and Miss Nina (Goolsby),” Whitten said. “I learned so much from Mr. Jesse and Miss Nina about community journalism and about life and living it the right way through the years.”

Phillips served in various positions with the Mississippi Association of College Stores, the Mississippi Press Association and the Oxford-Lafayette Chamber of Commerce and Economic Development Foundation. He was named as one of the Outstanding Young Men of America, selected for induction into the BancorpSouth Hall of Fame, won the Distinguished Jaycee Award, was president of the MPA, was named Oxford Citizen of the Year in 1980 and was president of Oxford’s Chamber of Commerce.

“Mr. Phillips was like a walking memory bank for things about the LOU community,” Whitten said. “He was so involved in so many ways from his early days with The EAGLE in the 1950s. His contributions will always be valued just as he will be missed.”

One of his contributions came in the early 1990s when the Chamber of Commerce did an analysis of how much money was being invested in economic development.

Former president and CEO of the Chamber of Commerce and Economic Development Foundation Max Hipp said Oxford fell short compared to other towns across the state.

“Jesse said, ‘We can do better than that,’” and challenged the entire board to do something about it,” Hipp said. “He was definitely and totally instrumental in developing the Economic Development Foundation. He got it started off the ground.”

“He was an extraordinary and dedicated man, who always put Oxford and Ole Miss first,” Meek said. “He had a passion for publishing and printing. He was measured by his actions. When he took a position on something, it was always carefully thought out and usually ended in the result he was trying to reach.”

In the 2010 video interview, Phillips said with new technology and the speed in which people were starting to get their news on the Internet, his wish for The Oxford EAGLE was to stay true to the community it has served for 140-plus years.

“I hope we will always do a complete job as far as reporting events in our community and dealing with the issues we need to deal with,” he said in the video.

It’s that striving for a complete job and being someone others could emulate that Jeff Busby, Lafayette County Board of Supervisors president, said he would remember of Phillips, who he considered a mentor.

“He was always there to give advice and always gave me his perspective on things,” Busby said. “He never forced the issue but was always a leader to give advice. He would always tell you if you made the right decision. He cared so much for this community and was involved in so many ways. Our thoughts and prayers certainly go out to the Phillips family.”

Rob Sigler contributed to this story.

Freedmen Town changing with time but still home to…