STATEMENT WIN: Rebels take down No. 2 Louisville to clinch series 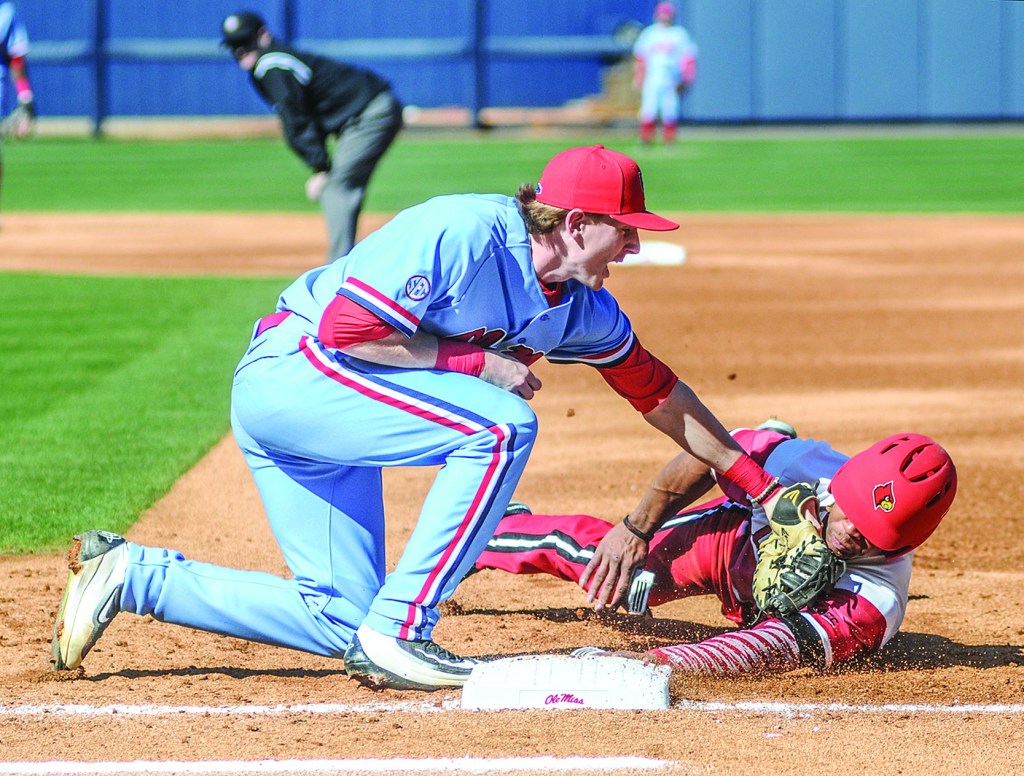 Ole Miss first baseman Will Golsan, left, tags out Louisville’s Corey Ray during Sunday’s game at Oxford-University Stadium. The Rebels won 4-2 to claim a series win over the second-ranked Cardinals.

Ole Miss had the opportunity to insert itself into the early conversation as a top-tier team this weekend with No. 2 Louisville coming to town.

Ole Miss did that and more as the No. 21 Rebels defeated the Cardinals 4-2 on Sunday at Oxford-University Stadium.

Ole Miss (6-1) clinched the series after winning the opening game Friday and dropping Saturday’s contest. It was the third straight series win over a top-2 team after taking series from Florida and Vanderbilt, who were both ranked No. 1 at the time of both meetings, last season.

“It was good to finish off  the weekend well,” Ole Miss coach Mike Bianco said. “It’s a big weekend obviously when you play a good team like Louisville. We got challenged in a lot of different areas this weekend. We didn’t play our best baseball, and I think we all realize that there’s more in us. Even today, but that’s a very good team that we just played.”

The Cardinals’ (5-2) two runs came in the first inning off a Corey Ray home run to lead off the game followed by an RBI groundout by first baseman Danny Rosenbaum that scored center fielder Logan Taylor for the early lead.

From there, Rebels starting pitcher Sean Johnson settled in to earn his second win on the year. In his second start and appearance coming off Tommy John surgery, the right-hander went 5.1 innings, giving up five hits and two earned runs and striking out three batters.

“I think it was a mental thing,” Johnson said. “I came to the dugout (after the first inning) and looked at myself. I knew in order for us to win this ball game I needed to put up some zeros. I needed to be a little more pissed off. I needed to throw some strikes and get my team back up.”

David Parkinson pitched 1.2 innings of scoreless relief and Will Stokes worked 0.1 innings. Wyatt Short earned his third save of the season, getting the final five outs of the game.

Golsan came up big again for Ole Miss with a solo home run over the Rebels’ bullpen in left field in the bottom of the sixth inning to give the Rebels a two-run cushion. It was the sophomore’s first home run as a Rebel.

“I’ve been hitting a few balls hard and finally just to get one over their head was a relief,” Golsan said. “When I hit it, I kind of jogged off a little and was like, ‘Man, please get out of here.’ It was a good feeling.”

The Rebels were held to three hits in Saturday’s loss but came back with eight on Sunday. Seven of the nine starters recorded a hit.

Ole Miss was 3-for-4 with runners in scoring position while Louisville struggled, going 1-for-11.

“Hitting’s contagious,” Bianco said. “Ryan Olenek gets a base hit to right field, and for the first time all weekend, we got the crowd into it a little bit. We get a base hit and another base hit by (Connor) Cloyd and we were able to do some things on the bases. We started looking a little more like ourselves offensively.”

Growing up
After Saturday’s loss, Bianco talked about his team having to do a little growing up and taking the good with the bad in the early portion of the season. After the three-error game Saturday, Ole Miss responded at the plate and in the field with only one error Sunday when Robinson had trouble playing a ball in the second inning.

“That’s one of the things that I think everybody feels good about,” Bianco said. “We don’t play that well on Friday but we win. (Saturday) we played better, but (Louisville) played better than we did and we made three errors that’s uncharacteristic for us. Then we ended up coming back and playing really well. Proud of them.”

Ole Miss concludes its opening eight-game homestand on Wednesday when the Rebels host Memphis. First pitch is set for 3 p.m.