AIMING FOR NO. 1: Chargers begin march toward ninth straight title 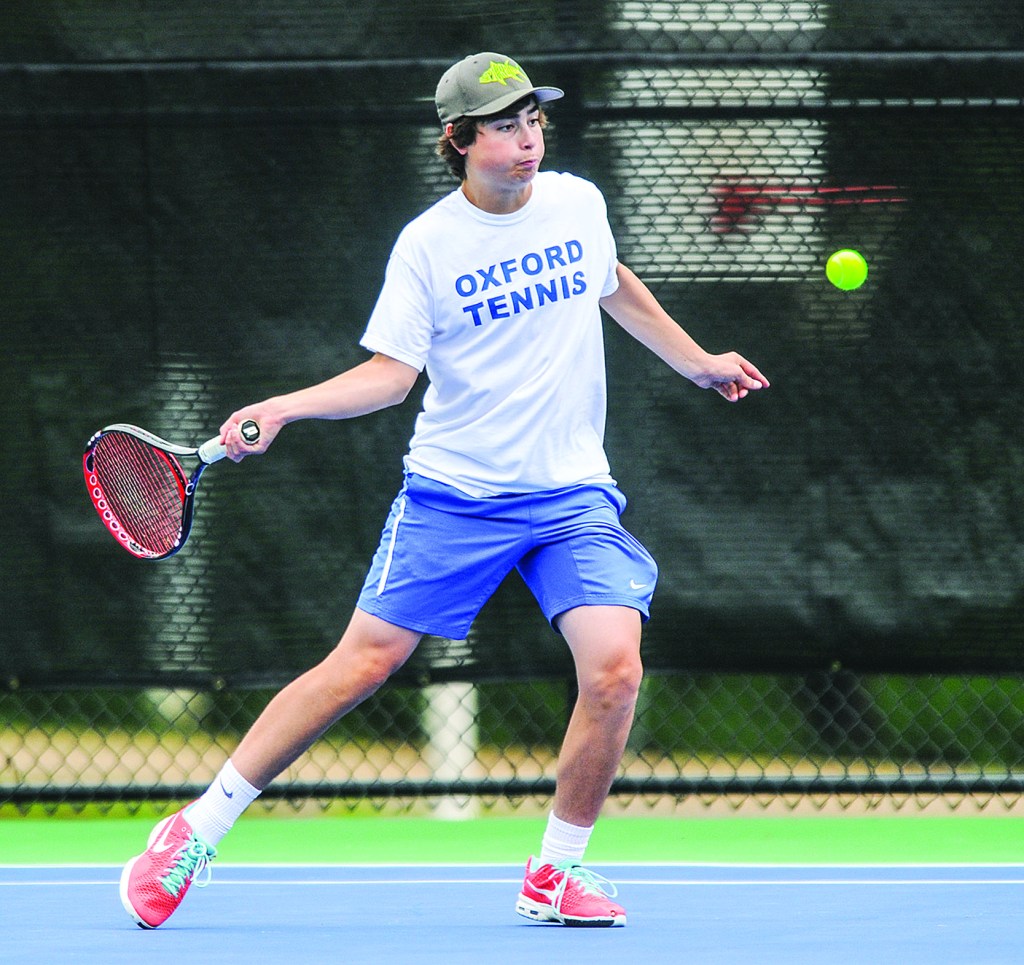 Oxford’s Gus Morgan and the rest of the Chargers will go for a ninth straight Class 5A team championship this season. The Chargers begin the season Wednesday against Grenada.

The road to the tennis state championships in Class 5A has gone through Oxford for eight years.

Don’t expect that to change anytime soon as long as Louis Nash is at the helm for the Chargers.

The long-time tennis coach and assistant athletic director is so confident in his team’s chances for a ninth consecutive team championship that when you ask him how this year will turn out, he only has one response.

With the talent he is returning on both the boys and girls teams, it is hard to argue with him.

For the boys, Nash has seniors Will Swindoll and Callan Shinall anchoring the team, though the two Meridian Community College signees will not be available when the Chargers take the court Wednesday in their season opener against Grenada.

Swindoll is still with the basketball team, which is in the midst of another playoff run, and will not rejoin the team until next week at the earliest. To keep in tennis shape, he has been hitting on his own so to not be coming in cold, but his absence will be felt.

It is a totally different situation for Shinall, who is dealing with a shoulder injury that has sidelined him for the forseeable future. He is rehabbing to get back to full strength as quickly as possible, but Nash is keeping him from hitting balls this week at least until they figure out a timetable.

“It doesn’t help at all,” Nash said. “With Callan out and Will out playing basketball, we’ll never have enough depth to make up for that. You’re talking the best doubles team in the state. We’re OK now, but it just bumps everybody up a notch.”

Those who will be asked to step up are Bo Nash, Max Mauney and Ryan Mounce. Nash has taken advantage of his opportunity and improved and been the most consistent in the early part of spring.

“They’ll be playing at the top of the lineup, and it’s going to be hard on them,” Nash said. “(Swindoll) is the main guy. He can play any position and play it well. I can put him in a position to win a point, and he’ll win it.”

The girls’ team will have all players available and return a lot of experience. Abbie Vaughn, Grace Ann Jones, Sarah Nash and McClellan Davis will be the leaders on the girls’ side and all played in the state championships last May.

Finding competition
With Oxford holding serve on 5A tennis for nearly a decade, it has allowed Nash to take survey of the land and realize that either his teams are just better each season or the rest of the state is taking a step back every year.

It is not even a question to him who he thinks the Chargers will face come state championship time in May. Another rematch against Stone County is something Nash is already penciling in on his bracket.

“What I think is just 5A has just weakened considerably,” Nash said. “We’ve either stayed status quo or gotten a little better. Last year in the playoffs, we went four rounds and didn’t lose a match. It was 7-0 all the way through, and that’s never happened. … I wish somebody else would come (out of the South). But (Stone County) still has kids on that team that can play a little bit. I think they’re going to be OK.”

With that in mind, the Chargers have matches against 6A teams as well as 4A teams on the schedule, including Northwest Rankin, Lafayette and New Albany.

“We love playing 6A and the good 4As,” Nash said. “We play all the good teams in Mississippi if we can find them. They’re the fun ones to play.”

STATEMENT WIN: Rebels take down No. 2 Louisville to…