Irby not your typical ‘lunch lady’ 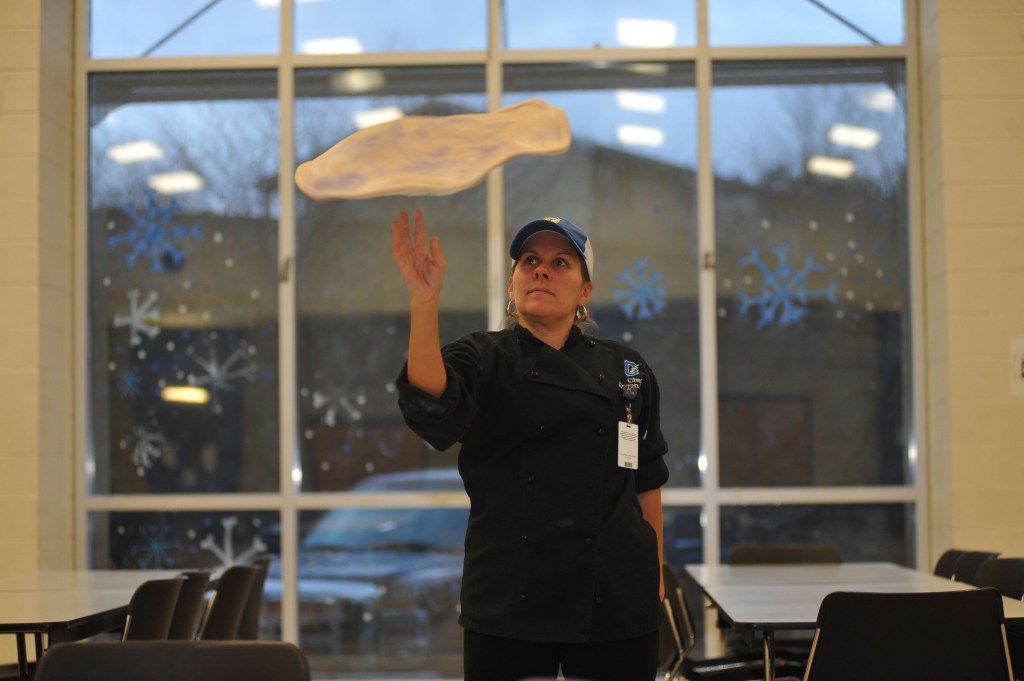 Most parents can’t say the person overseeing their child’s food at school is the No. 9-ranked pizza chef in the country who has cooked for dignitaries on Capitol Hill like Michelle Obama.

Most can’t say either their child comes home talking about an exciting new comeback sauce at lunch or macaroni and cheese that’s made of whole wheat and actually tastes appetizing.

Karen Irby, 39, is making that happen in the Oxford School District as its manager of food services, also known as the district chef.

“Basically what I do is spend a day or two days a week at each school and not really ever change a recipe, but kind of create a new way that they make, for instance, broccoli,” she said. “Instead of cooking it 16 minutes, cook it eight minutes so it comes out more green and crisp.”

She started with the school district in August and since then has taken all of the salad dressings and sauces and made them from scratch. One of the most popular has been a comeback sauce, also from scratch.

She said the kids love the sauce, which is mainly served at the high school. The middle school’s new sauce is honey mustard.

Part of her goal is to save the Oxford School District time and money with the sauces.

“We’re already using what it’s made of for other items, so we’re lowing our food costs because we’re not having to order packets of honey mustard,” she said.

The other part of her goal is to appeal to the children and have more participation at school lunch.

“Nowadays, kids eat differently,” she said. “Kids eat sushi. Sushi was not something that we ate as a child. So, a child’s palate is so different now than what it was five to 10 years ago. Flavors are different. So we’re trying to step up with the times.”

The stepping up has brought some more pride to the cafeterias and employees are crafting their own “local” recipes using the list of approved ingredients and recipes from the state, Irby said. She said even something as simple as adding rosemary to green beans can be a big hit.

“Some of these recipes we’ve changed a bit, not the recipe itself, but the way it is cooked,” Irby said. “Like pasta in a pan and baking it in the oven — we cook it in a tilt skillet until its al dente.”

In addition to having more items made from scratch, Irby would like to see a food court at the high school and a greater emphasis placed on school breakfast. Once there is greater participation in that first meal of the day, the district can move to making items from scratch instead of using pre-packaged food.

Irby, who was a former chef at Amp, a former general manager at 208 on the Square and who worked for a Top Chef contestant in Washington, D.C., isn’t afraid to get behind the stove and cook, serve or ring up students at the register.

“I do get in there and cook,” she said. “We made pizza from scratch one time for the high school. I’m ranked No. 9 in the world in pizza and I’m a member of the world pizza team. I have made pizzas for Michelle Obama, so pizza is my expertise.”

One day she got creative and made meatball subs from scratch at the middle school.

“Sometimes I get in there and really cook and sometimes I run the register because that is where they need me that day,” she said. “It just depends on what’s going on in any particular cafeteria that day.”

Irby grew up in Oxford and had parents in the Marine Corps, so she lived all over the country and learned various cuisine. On top of that, most of her family is involved in some way or another in the restaurant business.

“My grandfather was a chef who taught at a culinary school, so that is where I learned,” she said. “Since I was 17 I’ve been in the restaurant business.”

In addition to working with the school system, she gets to surprise campers as the chef at Camp Lake Stephens with food they don’t normally expect while roughing it in cabins on bunk beds.

She recently made stuffed French toast with ice cream and strawberries, Southern farmer’s omelettes and pizza.

“We get people all the time say ‘this isn’t camp food,’” Irby said. “I try to plan my food based on age, gender, because you know, men and women eat differently 90 percent of the time, and kids and adults eat differently. So I may not make chicken tenders and fries for a group of adults but that’s definitely on the list for the kids.”

Irby has four kids at home waiting on her to cook also, and they were in her corner this summer when she competed in the July Slice of America competition and crafted a new pizza.

“It’s my favorite thing to do,” she said. “It’s like art. I feel like making a new pizza every time it’s different. It’s my form of art — how I’m creative. This past July I did a barbecue pizza and one of the judges was a Memphis in May judge and he said it was the best barbecue and sauce he’d ever had. I just love doing it.”

In fact, she’d love to open up her own pizza place one day.

“I’ve perfected the sauce and the dough recipe and I have my own secret ingredient. I’ve been doing it for almost 20 years now. I started out as a GM in a pizza place, and in my mind, you should be able to do everything in the business, so I learned how to make pizzas, throw them in the air and toss them, stretch them, just learn to love it. For a while I worked at PMQ and got to travel with them. I got to go to New York and compete, and Orlando, and I was best pizza in Las Vegas in 2010. Pizza’s my thing.”

No matter what, she always wants to be cooking, especially her special pies.

“I like the creativity — the chance you get to create something,” she said. “I’m not an artist … I can’t color, I can’t paint, I don’t even feel like I’m a baker. The cooking — there’s just so much creativity that can go into it from the spices to the start to the end. From when you prepare it to when you present it. Presentation is a big thing. People see it with their eyes first, so you want it to look appealing.”

Oxford Schools benefits from McCafe for a Cause