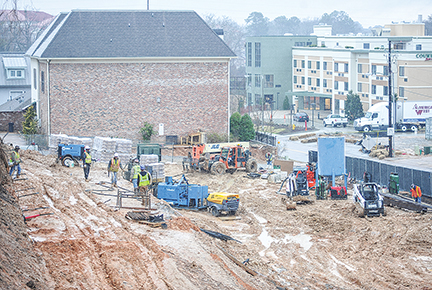 Jackson Row is under construction, in Oxford, Miss. on Thursday, March 3, 2016.

With some dirt finally turned at the construction site of Jackson Row, developers have hit another small snag in moving the project along.

Assistant planner Ben Requet said some issues have come to light with the original building plans for the 11-building development on Jackson Avenue.

“There’s been some technical issues with getting the building permits based on laws in place right now,” Requet said. “As a result, some changes needed to be made.”

Normally a few changes to a site plan wouldn’t necessarily need approval from the Oxford Board of Aldermen, however the city currently has a moratorium on granting special exceptions to allow residential dwellings on property zoned for commercial use. The moratorium was put in place until the city’s new comprehen- sive plan, Vision 2037, is adopted.

Jackson Row was given a special exception when developers first presented the site plan more than two years ago, to allow residential condominiums on top of commercial space. The original developers sold the property to CA Ventures of Chicago that appeared before the Oxford Planning Commission last year to get an extension of the special exception as the original had expired. It was granted, but with some required milestones.

Since the approval was granted based on the site plan submitted, developers for Jackson Row asked the Oxford Board of Aldermen Tuesday for permission to once again, go before the Oxford Planning Commission to ask for a special exception from the moratorium since their project has been in the planning stages for much longer than the moratorium.

The development is planned to have 11 buildings with varying heights with different facades. Total building area equals about 75,650 square feet with a retail/commercial/ restaurant space equaling about 10,665 square feet with the remaining being residential space with about 66 units, or 225 beds, and an underground parking lot for residents.

Hill named to OSD board of directors